RCMP ‘Contempt of Parliament’ Review Is First of Its Kind: Motz

TheGunBlog.ca — The House of Commons committee investigation of the RCMP undermining parliament on Bill C-71 is the first review of its kind in Canadian history, said Glen Motz, the member of parliament who requested the examination.

The House’s Standing Committee on Procedure and House Affairs will begin studying the Royal Canadian Mounted Police’s so-called “contempt of parliament” tomorrow at noon in Ottawa, with Motz as the first witness. (See below for how to watch.)

The Speaker of the House, the body’s chief administrative officer, said in June he agreed with Motz that the RCMP undermined the authority of parliament by publishing instructions and deadlines relating to Bill C-71 as if the draft legislation were already passed into law. The bill was still being debated in the House. It’s now before the Senate.

“This is the first time a committee will study the matter of government publications that prejudge the outcome of parliamentary decisions,” Motz’s office said in a statement dated Oct. 26. “A fundamental principle of our democracy is that ministers, departments and agencies are not permitted to assume Parliament will act according to their plans and must seek approval of elected officials before acting.”

Thank you for standing up for millions of men and women across Canada.#StopC71

Motz, a career police officer, has led Conservative Party opposition to Bill C-71 since the governing Liberal Party proposed the law in March to further penalize lawful hunters and sport shooters. Conservative Leader Andrew Scheer has pledged to repeal the bill if it passes and he is elected prime minister.

A public-relations firm that advises the government has said increasing prohibitions and restrictions on lawful firearm users presents an “untapped opportunity” for Trudeau and the Liberals to win more votes in the next election.

TheGunBlog.ca was the first to report the RCMP appeared to be enforcing Bill C-71.

Update Oct. 30: “We are aware of the Speaker’s ruling regarding the question of privilege related to information posted to the Canadian Firearms Program’s website, and the referral of this question to the House of Commons Committee on Procedure and House Affairs for further study. The RCMP is cooperating in the process,” the Ottawa-based RCMP said Oct. 30 by e-mail in response to TheGunBlog.ca.

The Ministry of Public Safety, which oversees the federal police, didn’t respond to a request from TheGunBlog.ca for comment on the committee session.

You can watch the meeting starting at noon Ottawa time via the House of Commons channel or via Motz’s Facebook page. 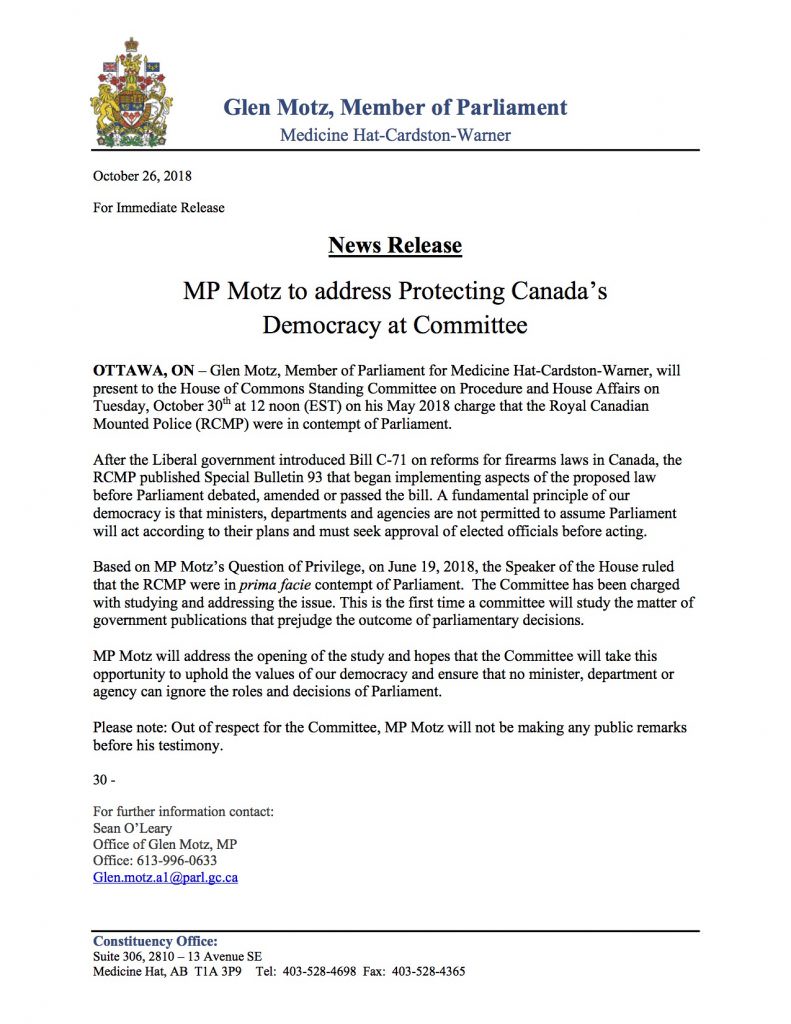