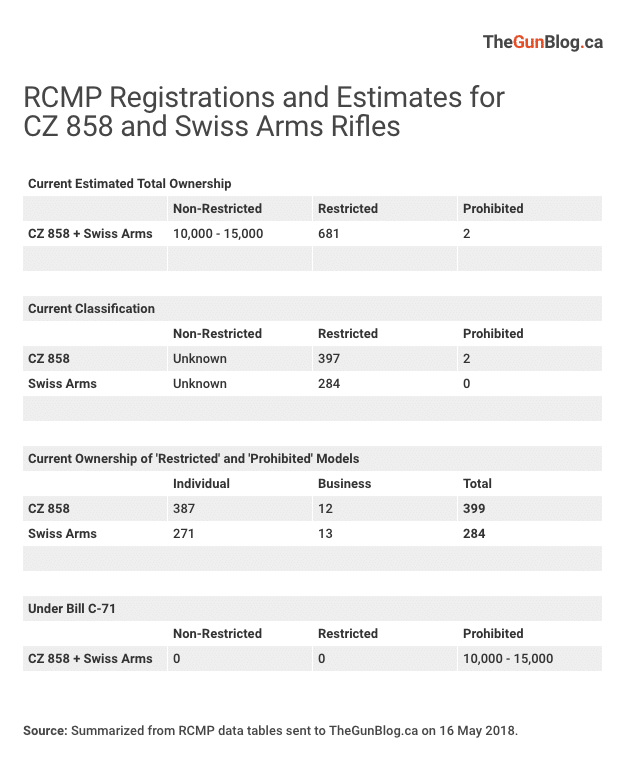 TheGunBlog.ca — The RCMP said it has ownership details for 683 legally owned CZ 858 and SAN Swiss Arms rifles, leaving 10,000 to 15,000 other federally licensed owners at risk of instantly becoming criminals without knowing it if the government passes Bill C-71.

Canada’s national police agency also said it’s reviewing its website on the draft law after instructing gun owners to comply with it.

“The CFP is currently in the process of reviewing the information that was posted,” the Royal Canadian Mounted Police’s Media Relations said today by e-mail in response to questions from TheGunBlog.ca. “CFP” refers to the RCMP Canadian Firearms Program.

“The CFP is using 10,000 to 15,000 as a planning figure only,” the Ottawa-based RCMP said today in a separate e-mail. “The actual number of affected Swiss Arms and CZ 858 rifles is unknown. The majority are non-restricted firearms, and records of non-restricted registrations no longer exist.”

Bill C-71 is the first proposed law in a generation seeking to make it tougher for millions of lawful, licensed, legitimate hunters, farmers and sport shooters to buy, own and use firearms.

If passed, it would immediately turn those 10,000 to 15,000 federally licensed gun owners into criminals unless they complied with new ownership requirements.

The bill also includes measures to easily ban any firearm, to track private gun owners who consider buying and selling firearms from each other, and to revoke gun licences for behaviour going back to one’s birth.

The RCMP said May 7 on its firearms website that owners of so-called “Restricted” CZ 858 and SAN Swiss Arms rifles must register the firearms with the police by June 30 to benefit from the delayed confiscation offered by Bill C-71.

But Bill C-71 is unenforceable because it isn’t law. There is no June 30 deadline for anything. The date is based on the text of draft legislation presented by the government in March and currently under review by parliament.

Laws that are already in effect make it a crime to own a firearm labeled “Restricted” or “Prohibited” without registering its ownership with the federal police. Legally owning or using any gun in Canada is strictly regulated and restricted.

Owning a firearm requires taking an RCMP safety course, passing written and practical exams, passing a background investigation to get a licence card and then passing daily RCMP background checks to keep it.

If existing CZ 858 and Swiss Arms owners comply with Bill C-71, they could keep their rifles until they die, after which the guns become subject to confiscation for destruction. The government and police refer to the possibility of deferred confiscation as “grandfathering.”

John Hipwell, whose Wolverine Supplies Ltd. in Manitoba was the main importer of CZ 858 firearms, said his understanding of Bill C-71 suggests all of the roughly 8,000 rifles he brought into Canada would be banned by the bill.

1. Response to questions on CZ 858 and Swiss Arms rifles and owners:

The CFP is using 10,000 to 15,000 as a planning figure only. The actual number of affected Swiss Arms and CZ 858 rifles is unknown. The majority are non-restricted firearms, and records of non-restricted registrations no longer exist.

[Four tables on CZ 858 and Swiss Arms, summarized at top.]

Any client of the CFP currently in possession of a restricted CZ/SA firearm must have that firearm registered with the Registrar of Firearms, as failure to do so would mean they are in illegal possession of that firearm. This registration requirement is needed in order to be eligible for the grandfathering provision, and the date of June 30, 2018 is the date on which future grandfathering eligibility is determined under the proposed provision of Bill C-71.

Updates were recently made to the Canadian Firearms Program (CFP) website to inform individual owners and businesses in possession of the affected Swiss Arms or CZ 858 firearms that classification changes have been proposed under Bill C-71. All Bill-related web updates are intended to allow clients to react appropriately and ensure that at no point are they in contravention of the law with regard to firearms ownership.

2. Response to questions on Bill C-71 website and June 30 deadline:

We appreciate your inquiry; it gave us insight that clarity is required on the RCMP Canadian Firearms Program (CFP) Bill C-71 web pages. The CFP is currently in the process of reviewing the information that was posted, with this in mind.

The information provided on the Bill C-71 web pages are intended to inform those who have potentially affected CZ and SA firearms currently in their possession of their options and eligibility requirements for grandfathering, should the Bill be brought into force as law. The website only instructs individuals to register any firearms that are currently, by law, required to be registered. Any client in possession of a CZ firearm that is currently classified as being restricted, must have that firearm registered with the Registrar of Firearms to avoid being in illegal possession of their firearm. This current registration requirement is tied to the proposed provisions of Bill C-71, as it would become a condition for grandfathering.

The date of June 30, 2018, which is outlined in the proposed Bill, has been put forward as a cut-off point for eligibility for grandfathering of any potentially affected CZ or SA firearm and their owners. This date was chosen to provide firearms owners with sufficient time to make an informed decision about whether they want to be eligible for the proposed grandfathering of an affected CZ or SA firearm, should the Bill become law.

Until Bill C-71 becomes law, individuals and businesses are entitled to possess their CZ or SA firearm, as long as they meet the proper licence conditions and any applicable registration requirements currently associated with the class of firearm which they own.