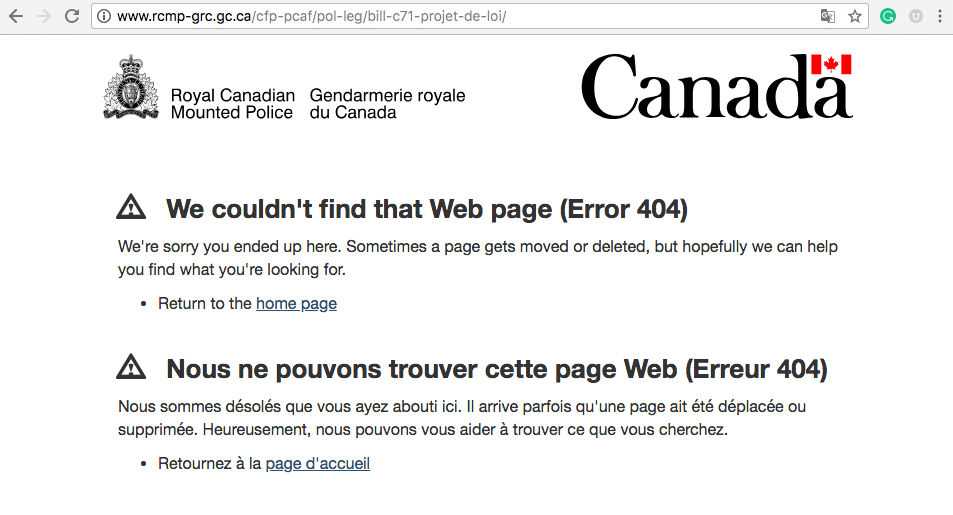 TheGunBlog.ca — The Royal Canadian Mounted Police said today its web pages about Bill C-71 briefly went offline with other content because of a computer-server issue that has since been fixed.

At about 7 a.m. today when TheGunBlog.ca tested the web pages for the draft law, messages were displayed saying: “We couldn’t find that Web page (Error 404).” The RCMP Canadian Firearms Program homepage no longer referred to Bill C-71 and showed “Date Modified: 2017-06-02.”

“Please be advised that the RCMP experienced server issues which affected the availability of some of our websites,” Marie Damian, a spokeswoman for the federal police, told TheGunBlog.ca today by e-mail. “This was a technical issue that has since been resolved.”

The RCMP website on Bill C-71 has been in the spotlight since TheGunBlog.ca reported May 9 that the pages ordered compliance with a non-existent law. An opposition member of parliament said May 29 that the RCMP was undermining the authority of the House of Commons to pass legislation, and the RCMP updated the pages the next day.

On June 19, the Speaker of the House, the House’s chief administrative officer, agreed with the member and found the RCMP showed “contempt of the House.”