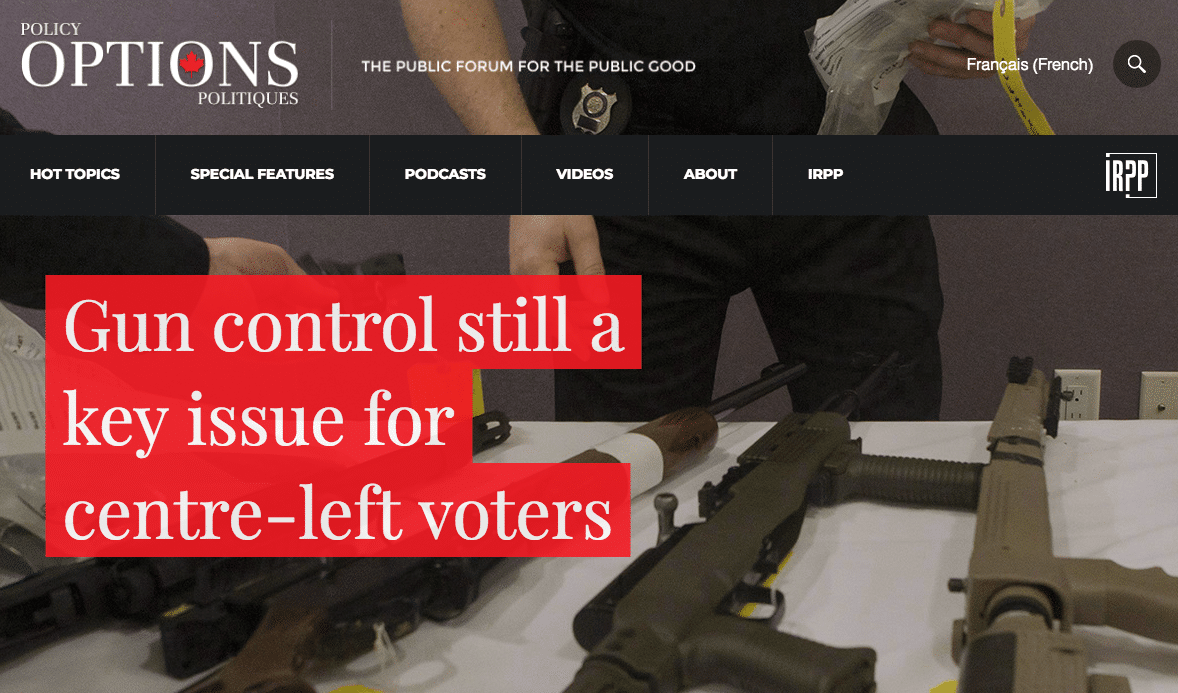 TheGunBlog.ca — One of the world’s largest public-relations companies said the Liberal Party of Canada should further slash firearm rights to win re-election next year, calling gun control an “untapped opportunity.”

The party could attract voters by exploiting fears of violence and ignorance about firearm laws to promise even more restrictions, Hill+Knowlton Strategies said March 9 in Policy Options magazine. The government PR advisor based its analysis on a Canada-wide survey last month that overlapped with the Parkland, Florida, massacre.

Shooting is one of Canada’s most popular activities, with more adults having gun licences than the number who play hockey.

The Liberals passed the punitive Firearms Act in 1995, and Prime Minister Justin Trudeau is working to fulfill 2015 election-campaign plans to further limit gun rights. The Liberals meet in April to prepare policies for next year’s election.

“Gun control presents an untapped opportunity for Justin Trudeau and his team to grow and solidify the voting base that gave them a majority in 2015,” Hill+Knowlton’s David Rodier and Elliott Gauthier said in their report analyzing the survey results.

“Over and above any electoral potential that exists for gun control, it remains an important gender issue,” they said. “A government that has focused so much on gender issues should keep this in mind as it considers its position on gun control.”

Rodier is vice president of strategic leadership in New York-based Hill+Knowlton’s Ottawa office. Gauthier, also in Ottawa, is national leader of research and analytics at the firm, which counts the government among its clients.

The online poll questioned 1,138 adults from Feb. 9 to Feb. 14, ending the same day a teenager killed 17 people at a high-school in Parkland, Florida. The article didn’t say who ordered or paid for the survey. The PR company didn’t respond to a phone call and e-mail from TheGunBlog.ca seeking comment today outside business hours.

The Firearms Act made it a crime to have a gun without a permit, and an expired one can lead to 10 years in prison. The Liberals also banned many of the world’s most popular rifles and handguns, and prohibited gun owners from using more than 500,000 of their legally owned guns. Having standard-capacity ammunition magazines also leads to jail.

The same day as the Hill+Knowlton report, another poll suggested that many Canadians want less freedom to own and use firearms. An anti-gun group backed by Trudeau ordered a survey that found respondents favour banning more rifles.

Also on the same day, The Walrus magazine published an essay urging the Liberals to further crimp rights for gun owners. 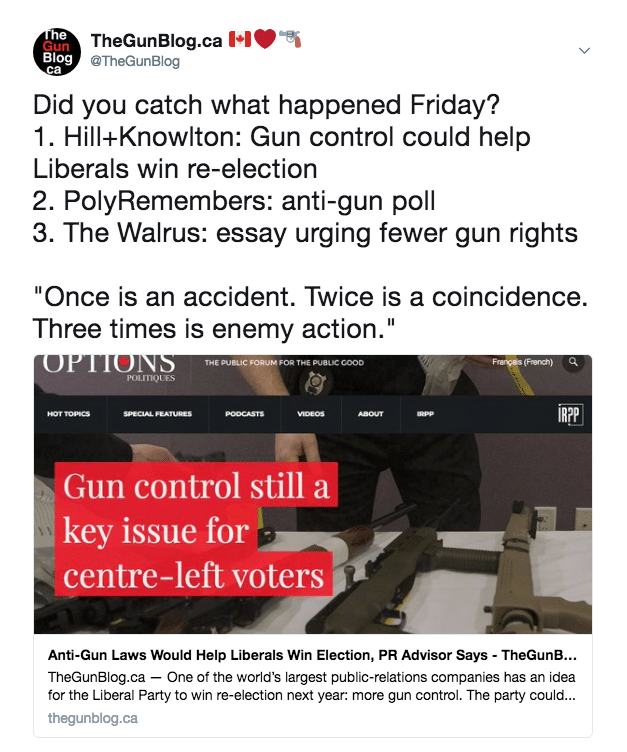 About 80 percent of Canadians don’t consider themselves knowledgeable about firearm laws, and 48 percent in households without a gun rate themselves as ignorant, according to the Hill+Knowlton poll. Almost 40 percent “are very concerned about gun violence in their community.”

Peter Donolo, vice-chair of the PR firm and a former advisor to a Liberal prime minister, said Feb. 22 in The Globe and Mail that “Canada has a bad – and worsening – gun problem.” The Liberals published charts this week showing gang homicides and illegal gun use increased after they took office.

Gangs in Toronto, Ottawa and Vancouver led to a spike in murders two years ago that had nothing to do with lawful hunters and sport shooters across the country.

Owning a gun legally requires obtaining a licence after taking a mandatory safety course, passing a written and practical exam and passing a daily background check by the national police.

The lack of knowledge about firearm laws didn’t stop most respondents from wanting stricter licensing requirements and background checks, and supporting a ban on more rifles and all handguns, the survey showed.

Rodier and Gauthier’s analysis of political affiliations and gun legislation found “the Conservative Party is the clear preference of those who think laws are too strict.”

Liberal and New Democratic Party supporters have the strongest desire to limit freedom for all Canadians, including hunters, sport shooters and firearm collectors.

The poll showed 58 percent of NDP voters and 50 percent of Liberals perceive current laws as “not strict enough.”

“Gun control clearly presents an opening for both parties on the centre-left of the spectrum as they compete for progressive voters in the run-up to the 2019 election,” Rodier and Gauthier said.