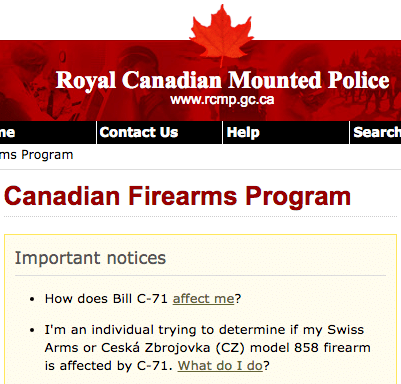 Screenshot: Part of RCMP website for firearm licensing, registration and classification. 08 May 2018.

Update: See how this article contributed to change:

TheGunBlog.ca — Canada’s federal police agency is so eager to ban guns that it’s ordering owners to register their firearms under a law that doesn’t exist.

The Royal Canadian Mounted Police, which manages firearm licensing, registration and classification, said owners of so-called “Restricted” CZ 858 and SAN Swiss Arms rifles must register the firearms with the police by June 30 to benefit from the delayed confiscation offered by Bill C-71.

“If you have not done so, the registration must be completed by June 30, 2018, in order for your firearm to be eligible for grandfathering,” the RCMP said May 7 on a new web page titled “How does Bill C-71 affect individuals?”

But Bill C-71 doesn’t affect individuals, businesses or anyone else because it isn’t law. There is no June 30 deadline for anything. The date is based on the text of draft legislation presented by the government in March and currently under review by parliament. It may become law, and it may not. For now it’s a draft proposal.

If passed, Bill C-71 would be the first law in a generation to create a range of measures making it tougher for honest people to buy, own and use firearms.

The bill directly targets licensed, law-abiding, legitimate hunters and sport shooters. The Liberal Party-led government said the bill is “fair” and that it would stop violent criminals and gangs, without saying how.

Some of the measures would immediately reclassify thousands of lawfully owned CZ 858 and Swiss Arms rifles as “Prohibited” so they can eventually be confiscated and destroyed. The draft text says owners at June 30 who meet certain criteria would be allowed to keep their guns until they die in a form of delayed confiscation called “grandfathering.”

The RCMP web page doesn’t mention the punishment for missing the June 30 deadline, failing to get other paperwork, and being considered in illegal possession of a firearm through a government reclassification, even if the gun was bought, owned and used legally for a decade or more.

The Criminal Code, a law that is in effect, says unlawful possession of a “Prohibited” firearm can lead to 10 years in prison, plus immediate confiscation and destruction of the firearm.

It’s also a crime now to have a “Restricted” firearm that hasn’t been registered with the federal police. They don’t have to wait until after June 30 to charge you, even if Bill C-71 fails.

Businesses aren’t eligible for delayed confiscation. They’ll lose any newly “Prohibited” guns in inventory right away, the RCMP said on a separate business web page based on the government’s bill.

Bill C-71 took the unusual step of mentioning the June 30 deadline as a way to serve notice to gun owners and to help them decide what to do with their rifles, said Randall Koops, the director general of policing policy ay the Ministry of Public Safety, which officially presented the bill. He made the comment yesterday when answering a question to a House of Commons committee reviewing the bill. (Watch a video replay here.)

“So the Liberals are putting a deadline on complying with a law that hasn’t been passed yet,” John Hipwell, the owner of Wolverine Supplies Ltd., a gun store in Manitoba, told TheGunBlog.ca in March, two days after Bill C-71 was presented. “That would make criminals out of people who hadn’t complied with a proposed law.”

“Is that democratic?” Hipwell said at the time. “Is that even legal?”