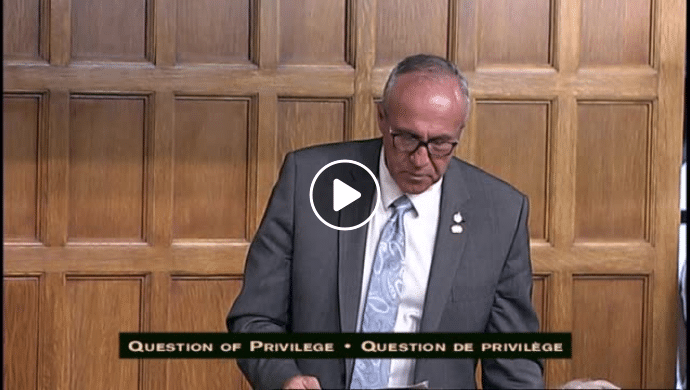 MP Glen Motz speaks in the House of Commons on 29 May 2018. Source: Glen Motz, Facebook.

The Royal Canadian Mounted Police changed the title on a web page on the planned law to “How would Bill C-71 affect individuals?” from “How does Bill C­-71 affect individuals?” The police also added an introduction to show the information is “intended to provide guidance to firearms owners should Bill C-71 become law.” The RCMP said May 16 it was “in the process of reviewing” the web pages.

“Bill C-71 is not law,” Glen Motz, a member of the Conservative Party and of the House of Commons committee reviewing the draft text, told TheGunBlog.ca today in a phone interview. “When it becomes law, then they can put out the guidance.”

If passed into law, it would threaten as many as 15,000 gun owners with confiscation and prison if they failed to comply with new ownership requirements, and would make it a crime to take firearms to a gunsmith or abroad without special permission from the police.

Yesterday, Motz rose in parliament to question the appropriateness of the website. As TheGunBlog.ca reported May 9, the original wording suggested the RCMP was enforcing Bill C-71 as a sure thing. The bill is still being reviewed by a committee of the House of Commons.

The federal police website originally referred to how the bill “affects” or “will affect” gun owners, and how owners “need to decide” on actions by deadlines mentioned in the draft text. The website wording was changed today to “would affect” and “should consider.”

“I’m rising because these online government publications presume the adoption of Bill C-71 by parliament,” Motz told the House on May 29. “No caveat that the legislation is subject to parliamentary approval is given by the RCMP, and there is no acknowledgment of the parliamentary process at all, in fact. This, in my view, is nothing but a contempt of parliament.”

Until draft policy is adopted, it’s theory and has no force of law. A challenge for any government agency is to strike the right balance between informing people about possible policy changes in time for them to take any needed action, without undermining parliament or assuming a draft text will pass as written.

That challenge is amplified by Bill C-71 because it set a deadline of June 30 for certain requirements, even though the text may not be adopted by then and may never become law.

Motz, who worked for 35 years as a police officer before being elected to parliament, said today he hadn’t seen the RCMP’s updated website.

He followed up in a late session of the House of Commons on May 30 after becoming aware of the revisions.

“I was advised today that the website has been modified, as of today,” Motz told the House around 9 p.m. on May 30. He referred to the changes following his comments as an “admission of guilt” and “covering things up after the fact.”

TheGunBlog.ca was unable to confirm what prompted today’s revisions. The RCMP didn’t respond immediately to a request for comment. (Update 04 June: Read the response.)

When contacted two weeks ago about other aspects of Bill C-71 and the website, including how the bill might affect owners of CZ 858 and SAN Swiss Arms rifles, the RCMP said the following (excerpt):

We appreciate your inquiry; it gave us insight that clarity is required on the RCMP Canadian Firearms Program (CFP) Bill C-71 web pages. The CFP is currently in the process of reviewing the information that was posted, with this in mind.

The information provided on the Bill C-71 web pages are intended to inform those who have potentially affected CZ and SA firearms currently in their possession of their options and eligibility requirements for grandfathering, should the Bill be brought into force as law. The website only instructs individuals to register any firearms that are currently, by law, required to be registered. Any client in possession of a CZ firearm that is currently classified as being restricted, must have that firearm registered with the Registrar of Firearms to avoid being in illegal possession of their firearm. This current registration requirement is tied to the proposed provisions of Bill C-71, as it would become a condition for grandfathering. 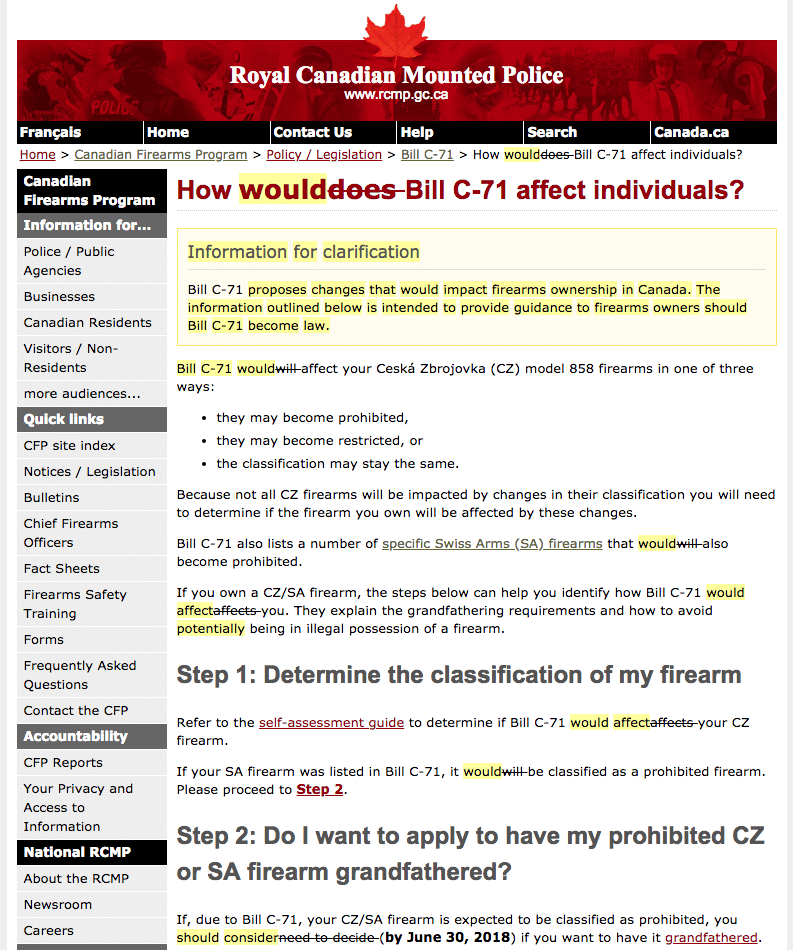