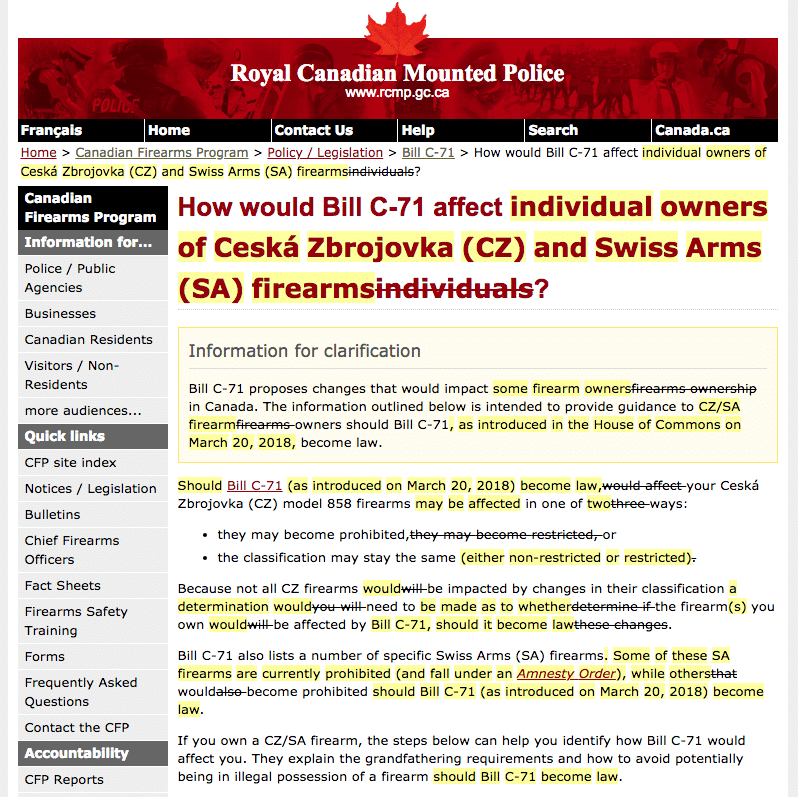 TheGunBlog.ca — The Royal Canadian Mounted Police rewrote its web pages on Bill C-71 after being criticized for undermining parliament and misleading the public by seeming to enforce the draft law to ban more guns.

The federal police edited almost every line of its Bill C-71 web pages for individuals and businesses yesterday, according to the page datestamp of 2018-07-03.

The new wording says the bill is proposed legislation introduced to the House of Commons, and shows it is a hypothetical possibility rather than law. The RCMP also clarified the steps licensed firearm owners would need to follow to avoid going to prison if the bill is passed.

Bill C-71 is the first proposed legislation in a generation aimed at making it tougher for lawful, licensed, legitimate Canadians to buy, sell, own and use firearms. It seeks to confiscate as many as 15,000 legally owned rifles, make it easier to refuse and revoke firearm licences, and increase tracking of licensed gun owners.

Find this helpful? You won’t find it anywhere else. Subscribe.

“The RCMP is continuously reviewing its website content to ensure that it addresses the issues as efficiently, and with as much clarity, as possible,” Marie Damian, a spokeswoman for the Ottawa-based police, said today by e-mail in response to questions from TheGunBlog.ca. “This is part of regular work that is undertaken, making every effort to provide the most current information on our website.”

Criticism of the federal police’s handling of the bill mounted after TheGunBlog.ca reported May 9 that the RCMP seemed to be enforcing a non-existent law. That report is the most-viewed article this year at TheGunBlog.ca.

In addition to the overhaul yesterday, on May 30 the RCMP changed the title of its Bill C-71 pages and added an introductory note.

On May 29, Glen Motz, an opposition member of parliament, told the House of Commons that the website undermined the authority of parliament to pass or defeat legislative proposals by suggesting Bill C-71 was in effect or would take effect.

The Speaker of the House of Commons, the body’s chief administrative officer, investigated the matter and agreed.

“Parliament’s authority in scrutinizing and adopting legislative proposals remains unquestionable and should not be taken for granted,” House Speaker Geoff Regan told the House of Commons on June 19. “The Chair is troubled by the careless manner in which the RCMP chose to ignore this vital fact and, for more than three weeks, allowed citizens and retailers to draw improper conclusions as to their obligations under the law. Changing the website after the fact does little to alleviate these concerns.” 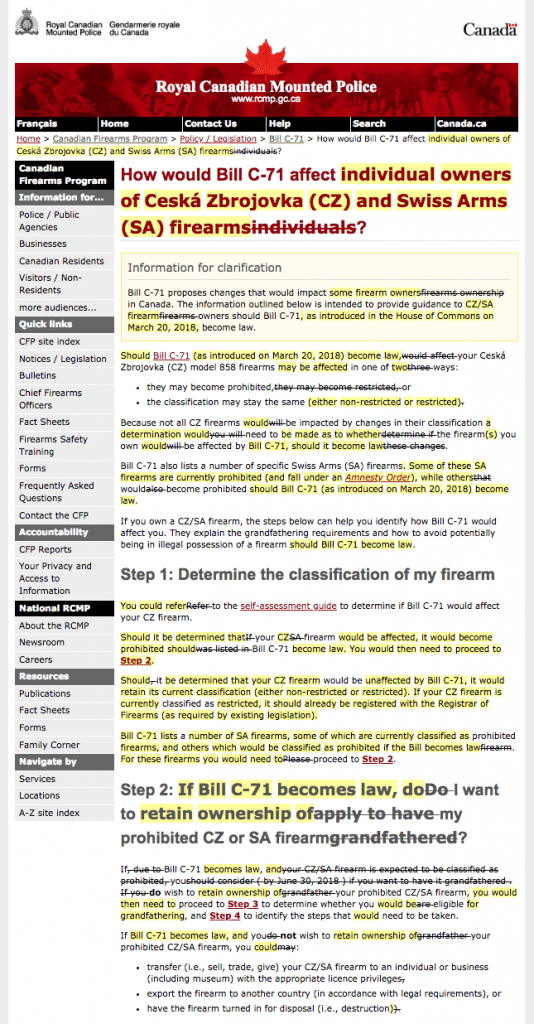