Police across Canada are rejecting gun bans against PAL holders.

Better to Invest in Safety

Seizing guns from safe and responsible owners uses money and officer resources that could go to community safety and stopping violent gangs, the city police told the Ottawa Police Services Board on March 2 in response to a City Council motion.

The objection to gun bans from police in the national capital is a new hit to the Liberals.

Ottawa officers are joining the federal firearm regulator and more than a dozen police leaders from Vancouver to Toronto to Halifax in opposing the party’s mass confiscations-incarcerations against honest Canadians. (See list below.)

“The cost, the energy that is spent, the personnel, those could be spent on other programs that have greater value, such as neighbourhood policing,” said Carl Cartright, the Ottawa Police head of the guns and gangs unit and drug squad, as quoted by the Ottawa Citizen.

Ottawa police would rather invest in neighbourhood policing, building partnerships with agencies than in a gun buy back program or in CCTV cameras https://t.co/7SZR8IEuUX #ottnews

All Guns Are Banned Already

Stopping unauthorized or unsafe gun users has been a police priority since before Canada confederated.

Today, all guns are banned for everyone without a firearm Possession and Acquisition Licence (PAL) authorized by the police.

Anyone without a permit caught buying, selling, having or traveling with any gun risks jail.

The Liberals are preparing new federal laws that specifically target PAL holders for the forced surrender of a quarter-million of their rifles, and potentially all of their handguns through municipal bans.

Keeping your firearms could lead to jail.

None of the policies aims at violent offenders.

The plans go against the regulator in charge of approving and tracking Canada’s 2.2 million licensed men and women.

The opposition Conservative Party calls the Liberal measures an “attack” on hunters, farmers, sport shooters and other responsible Canadians.

Ottawa Police Chief Peter Sloly and his peers across the country have rejected the illusion of quick fixes such as bans. They call for effective systemic and community approaches.

Street violence and firearms crimes in this and all cities are complex issues that will not be addressed by quick fix reactionary activities.

Any ban would force Canada’s 70,000 police to confiscate gear from each other, as well as from their families, friends and neighbours.

Officers often own handguns, rifles and shotguns for plinking, training, competing or collecting, separate from the duty firearms they are required to carry for personal and public safety.

The Ottawa Police presented its analysis of mass confiscations to the Police Services Board in response to an amended motion last June by Councillor Rawlson King.

King initially proposed measures including paying people to voluntarily turn in their firearms, and requesting that: “the sale and possession of handguns in the City of Ottawa be banned.”

In addition to squandering police resources, such policies would threaten many of the city’s 50,000 or so PAL holders and their families with jail unless they leave town or surrender their gear.

A slide from the police presentation to the Police Services Board further suggests new confiscations or voluntary turn-ins would be wasteful and ineffective for boosting safety.

“Efficacy is low,” said a bullet point on a slide titled “Gun Buy Back.” “Resources can be better used in crime prevention initiatives.” 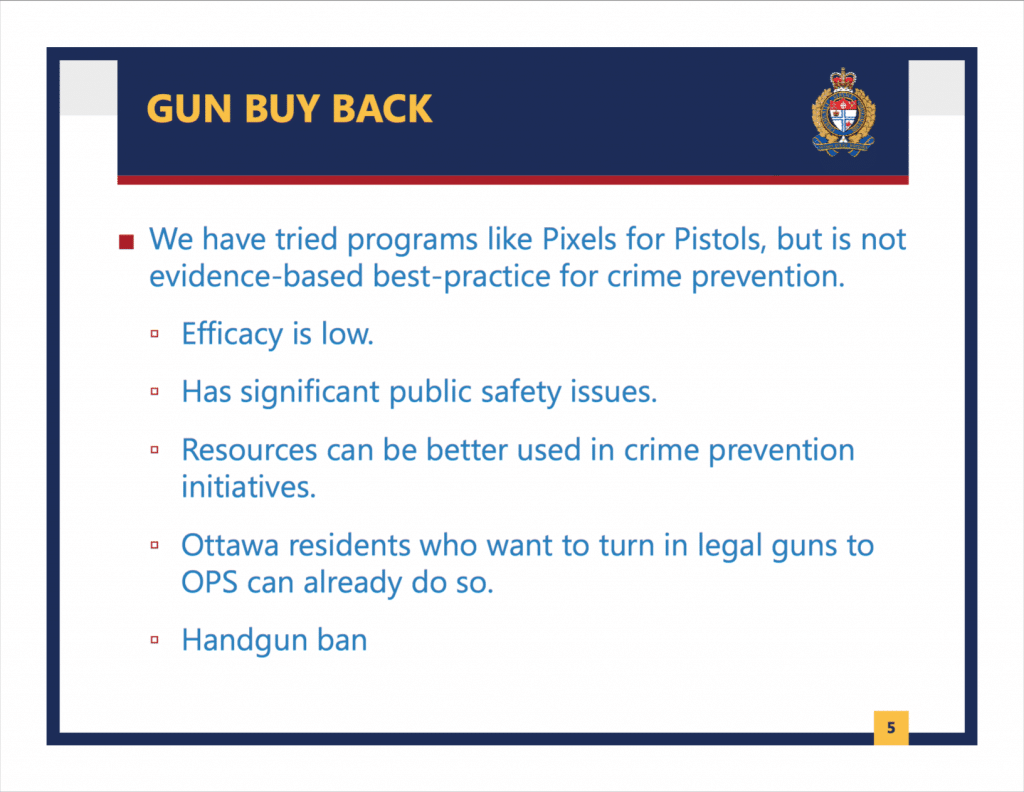