Petition to Stop Trudeau’s Confiscation Order Surges to No. 1

TheGunBlog.ca — The petition to stop Canadian Prime Minister Justin Trudeau from ordering mass confiscations against honest men and women surged to the country’s No. 1 e-petition on record last night.

Petition e-2341 on Democratic Process and Parliamentary Democracy had more than 132,540 signatures as of 12:45 p.m. Ottawa time today, the most of any online petition to the House of Commons since the system started in 2015.

It exceeded the 130,452 of the previous record holder late last night, and is still open for two weeks. 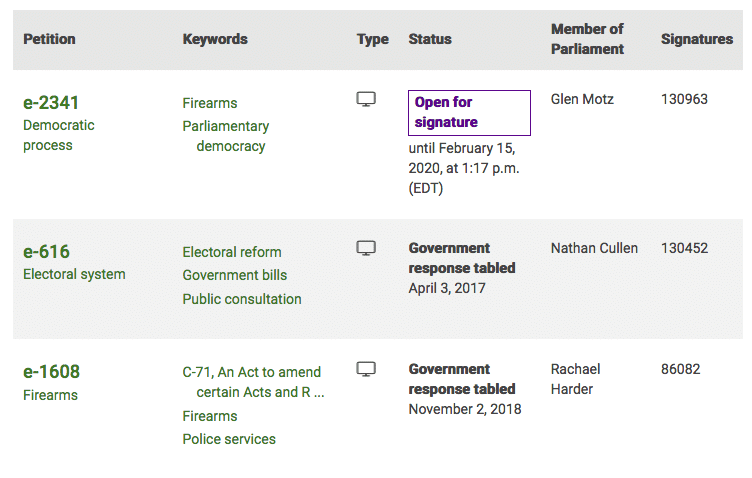 Scroll down to see petition banners by gun stores.

Trudeau’s governing Liberal Party is rushing to prepare a cabinet “Order In Council” (OIC) for federally licensed firearm owners to surrender a quarter-million of their rifles, or risk jail.

The petition urges the Liberals to run their plan to confiscate and incarcerate through parliament rather than pushing it through by OIC, a measure used mainly for administrative matters.

“We, the undersigned, citizens of Canada, call upon the Government of Canada to put any new firearms laws, bans, buyback programs or changes to licencing before the House of Commons to be debated,” says the petition.

Even with all the signatures and a push from the shooting community and firearm industry, barely 5% of Canada’s 2.2 million federally licensed firearm users have signed.

The petition is open to all citizens and residents of all ages, not only permit holders.

It was initiated by Bradley Manysiak of Alberta and sponsored by Glen Motz, a member of Parliament from Alberta.

“An order in council is wrong,” Motz told TheGunBlog.ca on Dec. 20.

TheGunBlog.ca published a notice on the homepage yesterday with a link. 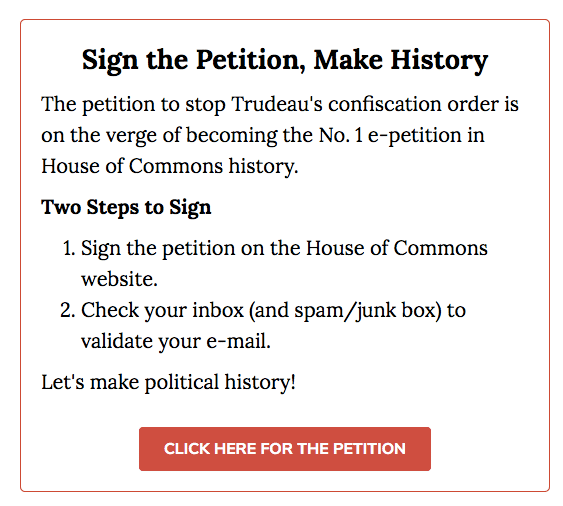 TheGunBlog.ca posted this on the homepage yesterday.

Tens of Thousands of People

He’s promising one of the biggest crackdowns against honest citizens of any democracy in history.

On top of the rifle seizures, he’s working to expel handgun owners and their families from where they live by allowing municipalities to prohibit their gear.

The rising opposition to Trudeau’s plans from provincial premiers, police leaders and the public, plus the complexity and cost of the measures, means he will almost certainly fail.

The No. 3 petition on record is also against a Trudeau initiative against safe and responsible hunters, farmers and sport shooters: Bill C-71.

Most petitions get the most signatures when they open, then slowly fizzle out.

E-2341 is a rare case of tens of thousands of signatures more than half way through. It crossed 100,000 less than a week ago. More than 30,000 people have yet to validate the confirmation e-mail.

Petitions are generally presented to an empty House of Commons and then ignored by the government.

Many shooters are working to make this one count, urged on by Canada’s largest independent gun shops.