More Than 90,000 Canadians Are Allowed to Carry Guns Every Day 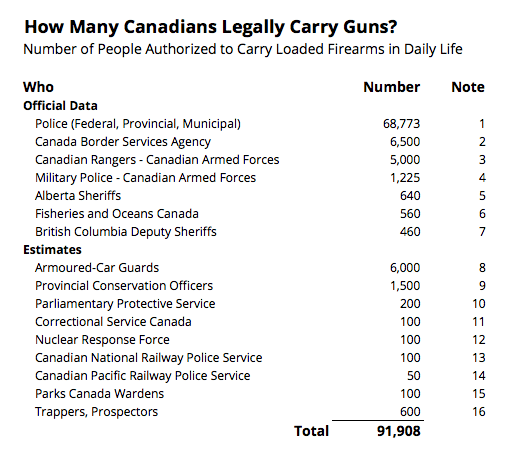 More than 90,000 Canadians are authorized to carry loaded guns on their person in daily life, mainly for self-defence against human attackers. More than 90 percent are civilian police and law enforcement, or military. If they were all on duty at the same time, it would be equivalent to about 3 people carrying guns for every 1,000 adults.

I find it odd when people say that the presence of guns is a threat to life. Not a loaded firearm aimed at them by someone squeezing the trigger or threatening to do so, but the mere proximity of a gun, like being in the same area as one.

Guns are all around us, all the time. On farms, in the bush and in cities. Most are unloaded and locked up.

Millions of Canadians are allowed to use our more than 10 million firearms for hunting, sport, pleasure, collecting and other legitimate, healthy activities. We put effort into using them responsibly, skillfully and safely.

At any given moment, tens of thousands of Canadians have loaded and unloaded guns in our hands or nearby: in a holster on a hip, at home, at target ranges, while hunting, in the cab or trunk of a car, or in the tractor, truck or ATV on the farm or in the bush. (Tens of thousands of hunters are probably out today with loaded shotguns for the first weekend of turkey season in many areas across the country.) Factories, warehouses and shops store tens of thousands of firearms. And many people (hundreds? thousands? tens of thousands?) carry without authorization.

The table shows the number of people at different organizations who are authorized to carry on their person every day.

New info received since this post was published, updated as I get it. (Thank you to those who contact me with info, and for subscribers and readers who made this post one of the most-viewed articles on this blog.)