TheGunBlog.ca — Following is an interview with James Cassells, the sales manager for Canada at Austria-based Glock GmbH. He comments on business, products, new police contracts and possible gun bans.

Cassells, a former Toronto police officer and SWAT member who developed use-of-force training for the police in the early 1990s, spoke with TheGunBlog.ca by telephone today after the company said it will sell its new G48 pistol specifically designed to be legal in Canada.

The interview was edited for clarity.

Was the G48 designed for Canada?

While we have modified various models in the past to make them Canada legal, the G48 was the first standard model to account for Canada compliance in design.

What do you think of it?

How much will it cost?

It’s probably going to be around $650 Canadian. There will be a slight adjustment in our prices because of the dollar being where it is now.

When will the G48 be available in stores?

We’re waiting for the U.S. government to get back to work. If they go back to work pretty soon, we could see them by late February, early March.

How were last year’s sales for Glock in Canada?

It was the best year we’ve had.

You have to take into account that we had a couple Canadian models, the G19 and G19X. We had the G17M contract for the OPP [Ontario Provincial Police].

Just on the law-enforcement side we did more than 10,000.

Are you seeing a bump in sales from people buying guns before any gun bans take effect?

What’s going on with law enforcement?

The law-enforcement side is a big part of what I do.

We also just brought the Mirabel police force on board in Quebec. They switched from Smith & Wesson.

Which pistols are they getting?

We have a lot of agencies that are going from .40 calibre to 9 mm. It’s something that’s just going to continue for the next few years as far as I can see.

Some agencies that use .40 calibre pistols are coming up for replacement. You’ve got to remember that half the country never went to .40 calibre.

One of the big benefits of 9 mm is that ammunition is cheaper. As more and more agencies move away from .40 calibre south of the border, you’re going to see the price of .40 calibre go up. 9 mm is softer to shoot, and generally your follow up shots in the event they are required are easier to control.

The New Westminster police in B.C. are going from .40 cal Glocks to G17 MOS models. I’m pretty sure they are the first police agency in North America where the whole department is doing that. They aren’t going to put optics on every pistol, but it’s very progressive thinking of them and is in keeping with the fact that they have purchased a replacement pistol for likely the next 15 to 20 years.

How significant is new ammunition design in moving to 9 mm?

I don’t get too deep into ballistics.

A good 9 mm law-enforcement round is as good as a .40 calibre round these days. That’s different than the case 15 years ago.

People qualify more easily on 9 mm. That’s one of the biggest factors with 9 mm: people’s skill level improves, and they keep the skills longer. That’s critical for law enforcement.

For guns that we specifically make for Canada, I have to be careful that we don’t build too many, that we don’t have more than the market can bear.

After the G19 with the maple leaf, we’re still going to make those in limited quantities. I don’t want them sitting in the factory, and once we make them for Canada, we can’t sell them anywhere else.

How do you gauge interest for the G45?

With the G45, there’s definitely an interest in having it with a Canadian barrel.

We’ve had agencies adopt the 45. I actually think that’s the best pistol we make for law enforcement today. 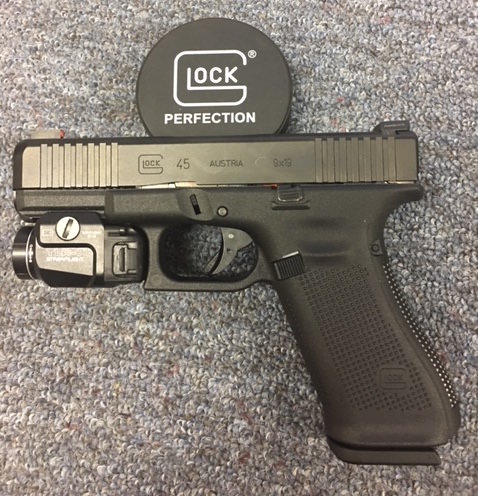 One of the challenges for law enforcement is size and weight.

If you take pistol lights like the Streamlight TLR-1 or the Surefire X300, they take two batteries. They hang off the pistol over the muzzle. That makes for a longer draw out of the holster and a bigger holster.

The advantage of the G45 is that if you pair that with the Streamlight TLR-7, I personally think it’s the best light out there for a pistol. It gives you a small, compact design, only uses one battery, and it doesn’t protrude past the front of the barrel and the slide. You’re now in the draw of the pistol, not in the draw out of the pistol to accommodate the light.

The G45 is a great pistol because you have the slide of the G19 and the grip of G17.

Think about a police officer in a patrol car. You don’t have a whole lot of room. It’s not unheard of for police officers to have to draw a pistol from a seated position in a car. Those are things you should take into consideration.

Surefire makes a phenomenal light, there’s no question about it. Streamlight makes a great light as well. You have to see the whole picture.

When you add something to a pistol, you need to see how it impacts everything. When you or I draw from a pistol, we might not have any trouble. But try putting on body armour and a winter jacket, and it’s a different experience.

If you’re thinking of buying a pistol light or any other product via Amazon.ca, please consider going through TheGunBlog.ca Store. It helps to support our work and doesn’t cost you extra.

What do you think of the government’s possible gun bans?

I think there’s great reason to be concerned.

Nothing is going to change for law enforcement.

The challenge I see for the prime minister is: what problem are you trying to solve? If you’re going to talk about crime, you should talk to the police.

There’s a huge problem with people buying some gun parts without a licence, or 80 percent lowers or using high-cap mags.

If the government said you need a PAL to buy gun parts, nobody would say a thing.

The stores police themselves. They go beyond the law because they know it’s the right thing to do. They will ask people for their PAL even when the law doesn’t require them to.

We do such a miserable job of telling people the reality of the situation.

I don’t want us to take a vocal, “It’s my right.” voice because it’s not our right, so it would be foolish to say that. But what I would like is for us to be more vocal about reality.

PAL holders are not the problem.