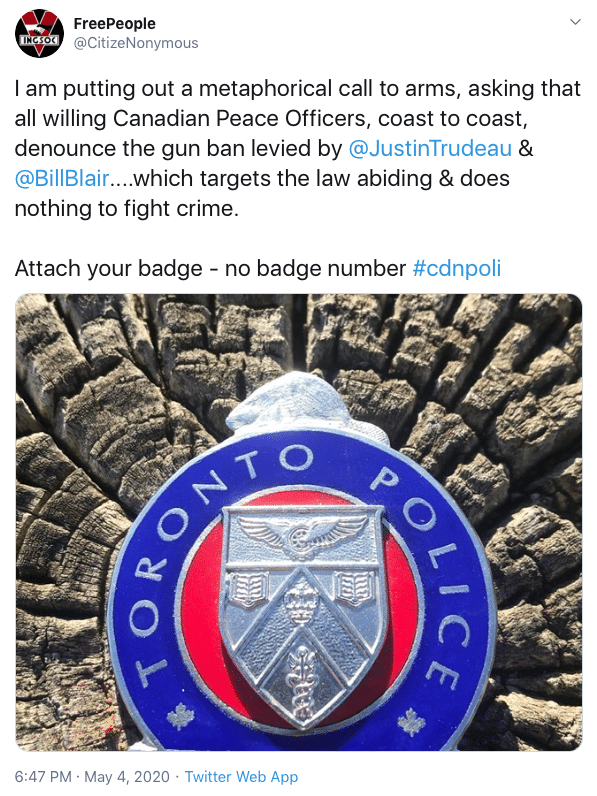 About 25 of the country’s almost 70,000 municipal, provincial and federal peace officers have responded to the Twitter campaign started yesterday evening, plus about as many allies in emergency services, corrections, border staff and the military.

“FreePeople,” under username @CitizeNonymous, began the movement to stop Prime Minister Justin Trudeau and Minister Bill Blair’s attack on the owners of more than 125,000 rifles. Trudeau promised to criminalize handgun owners next.

I am putting out a metaphorical call to arms, asking that all willing Canadian Peace Officers, coast to coast, denounce the gun ban levied by @JustinTrudeau & @BillBlair … which targets the law abiding & does nothing to fight crime. Attach your badge – no badge number #cdnpoli

I am putting out a metaphorical call to arms, asking that all willing Canadian Peace Officers, coast to coast, denounce the gun ban levied by @JustinTrudeau & @BillBlair….which targets the law abiding & does nothing to fight crime.

FreePeople says they are a “Former Soldier, Present Police Officer.”

See below for their exclusive comments to TheGunBlog.ca.

The opening tweet, with a Toronto Police Service badge, attracted about 1,400 retweets and 2,000 “likes” as of 9:30 p.m. today in Toronto, far above average for FreePeople.

The movement by police willing to risk their careers for their principles is still tiny.

A petition to stop the bans had more than 40,000 signatures as of 10 p.m. in Toronto, heading to become the No. 1 e-petition in House of Commons history.

It started this morning with one signature.

The government depends on police to seize and destroy the firearms over the coming years and decades, and to charge or jail owners who opt out.

Good for you! This gun ban will do nothing! pic.twitter.com/69wJl7hLtF

Categorically against the ban

I know MANY others that are as well. pic.twitter.com/G2VrUxCII1

This will not stand. I do not support this ban. Nor this minority government. I know this will not work. @CCFR_CCDAF pic.twitter.com/6V0ita1jVX

FreePeople made the following comments to TheGunBlog.ca in confidence, explaining the need for privacy:

Police officers are not allowed to have a personal opinion. If I were to make my name known, I would be severely reprimanded, if not fired immediately.

TheGunBlog.ca hasn’t verified the identity or validity of FreePeople’s statements.

We are publishing them with the author’s permission.

Sub-headings were added by TheGunBlog.ca.

Any police officer, serving or retired, who would cite law-abiding gun owners as a safety problem, is at a minimum, completely oblivious … but more likely, has an ulterior motive.

I am not sure if it’s material to you, but I will say, nonetheless, I have been attending civilian shooting ranges for years. I have brought my AR-15 rifles and shot alongside others who used AR-15 rifles, as well other firearms now banned by the government.

I have shot beside elderly and youth members, members of all faiths … members whose families have resided in Canada for generations, as well as with members who are new to Canada, having emigrated from all areas of the globe.

There are officers who agree with the ban, or do not care either way. When I have spoken to them, I quickly realized, they don’t know anything about firearms and even parrot some of the commonly spoken misinformation.

No Plans to Comply

I will say, for the groups of police that I mentioned above … who are ex-military, or own their own firearms (many of us own AR-15 pattern rifles), they have no plans to comply with the ban.

In fact, many of us rely on civilian ranges to maintain our skills. The service has continually reduced the amount of training we receive with firearms, citing the budget.

If we didn’t use civilian shooting ranges, with our personal AR-15s and personally bought ammo for our pistols, we would be unprepared for the dangers we face.

Very often my colleagues and I watch our chief, or other top-ranking members of the service, discuss the state of crime in Toronto and their plans to combat violence. They almost never discuss the realities of policing and how thinly stretched our ability to respond to radio calls, actually is.

How will Canadians make intelligent choices, on how best to protect themselves, if their police service gives them incomplete (or intentionally false) information, with which to make a decision?

I understand that telling Canadians the truth may not be politically viable, but a democracy cannot function without access to correct, whole, and timely, information.

I have not personally ever responded to a shooting, where a licensed PAL holder was involved … in any way. We consistently encounter gang members, and/or people who are looking to make a name for themselves, in relation to some sort of gang-related activity.

The government is fully aware that law-abiding gun owners are not the problem, which is why this is such a betrayal of public trust.

It bares mentioning that I would not have attended civilian shooting ranges, where numerous Canadians were firing these now prohibited firearms, were they such a danger to the public. In many cases, civilian shooters are more skilled than their police counterparts.

Police officers across Canada are issued AR-15 rifles, because they are better tools (firearms) to protect life. They offer the operator the best opportunity to survive and to protect others, when faced with an imminent threat, capable of causing serious bodily harm or death.

And contrary to what some people believe, every person in Canada, who lawfully possesses a firearm, may use that firearm to defend their life.

In such a circumstance, said firearm would be utilized as a weapon of opportunity. So if all persons who lawfully possess firearms may use them to defend their lives and the lives of others, why wouldn’t they use a firearm which provides them the best opportunity to succeed?

There is no reason why a PAL holder, who is properly vetted and is searched via CPIC daily, should be deemed ineligible to possess these now prohibited firearms.

We Are All Canadians

We are all Canadians. Whether first responder, military member, corrections officer, CBSA officer, we all call Canada our home, and if we can’t trust our neighbours anymore, what will our future be.

I suppose, that is what this all boils down to. I took an oath to protect and serve all Canadians. In stark contrast, this government has decided, unjustly, to target many Canadians. I won’t be party to this forced government confiscation and I stand alongside many other Canadians in that regard.

Correction May 07 at 13:45 Toronto time: Corrects number of police in second paragraph.