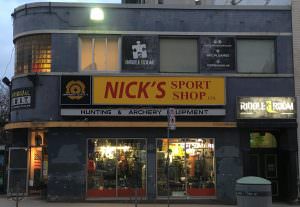 The plan makes Nick’s the latest firearm store to oppose municipal and federal government moves against millions of Canadian hunters and sport shooters. Prime Minister Justin Trudeau is preparing a new law with more prohibitions for lawful gun users and is examining a “full ban” on handguns.

Mayor John Tory was re-elected in October after campaigning to shut down gun stores and take away firearms from men and women with federal gun licences. Tory invited the city’s 100,000 sport shooters to leave Toronto as he blamed them for gang violence that has soared since he first took office in 2014.

“We are a community in Toronto,” Margettas told TheGunBlog.ca from his store counter. “And by banning handgun sales, our elected officials are, in a way, saying we ourselves are selling those firearms on the streets.”

The hunting, camping and military-surplus store will begin offering Glock and Beretta handguns from a secure area at its street-facing shop, Margettas said. He plans to sell optics and other firearm accessories next year. The retailer used to sell firearms actively and scaled down after a break-in many years ago.

“We’re getting back into it,” Margettas said. “As word gets out there, we’ll slowly be adding higher-end models like SIG Sauer. It’s definitely a matter of ‘walk before you run.’”

Hunting is at the heart of Canada’s heritage, and target shooting is one of the country’s safest and most-popular sports. More men and women have a gun licence approved by the federal police than play golf or hockey or who ski.

All firearms are banned for everyone under threat of prison unless they have a permit.

Nick’s, which operates on Toronto’s central roadway between the Eaton Centre shopping mall and Bloor Street, will start by catering to sport shooters with a few products in store or that can be ordered.

“We’ll show them what we have in stock,” Margettas said.

The shop will have a smaller selection than across town at Al Flaherty’s, the only gun store left in Toronto until Nick’s ramps up.

Margettas said he has been going to Al Flaherty’s for years.

“We are competing businesses, but we have the same interests,” Margettas said.

Posted/Written After Our Article Was Published