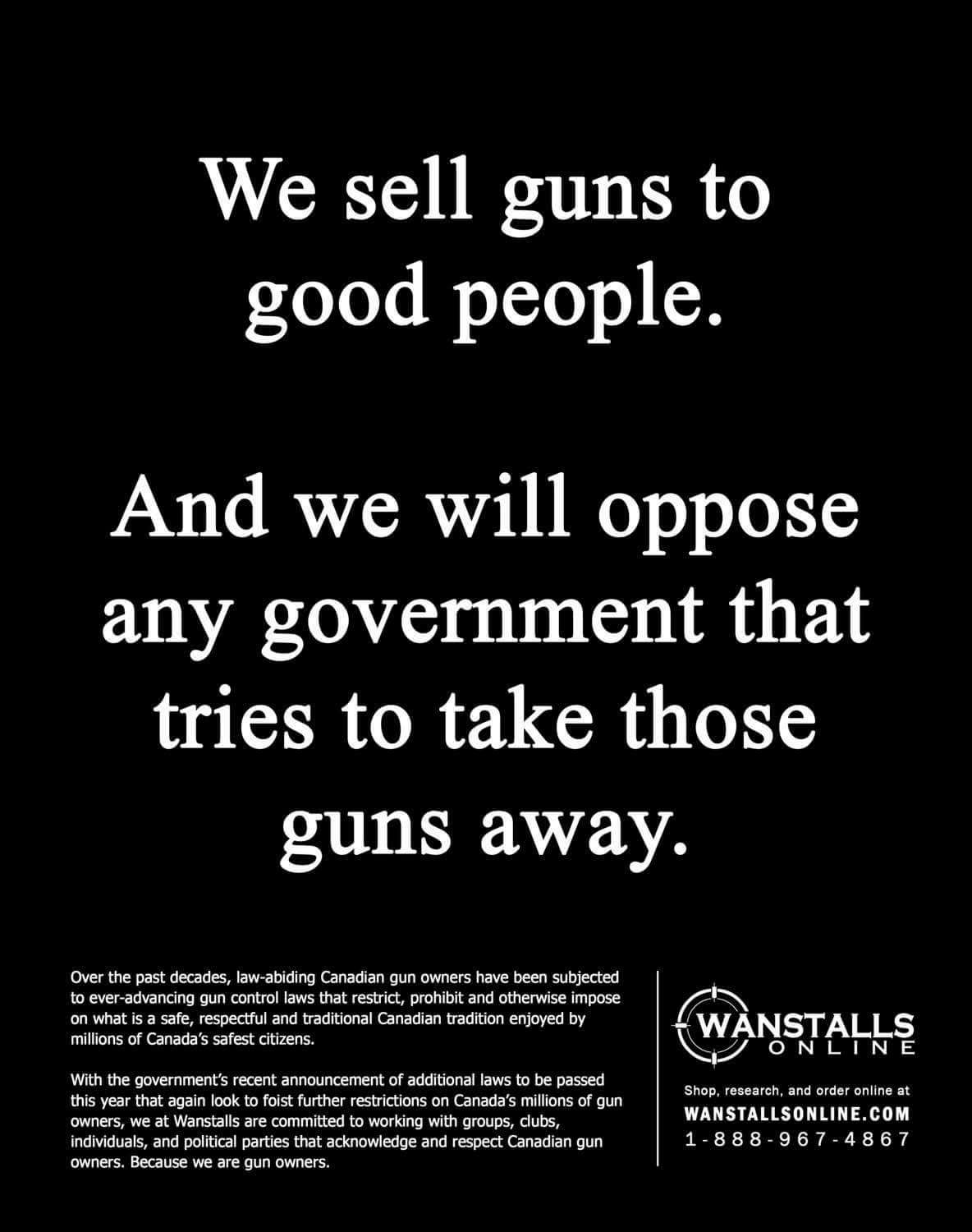 “We’re a very politically minded store,” Matt Mendel, the manager of the gun store near Vancouver, said in an interview.

Bill C-71 is a draft law to ban more guns owned by honest men and women, make it easier to refuse or revoke firearm Possession and Acquisition Licences and make it harder for licence holders to buy and sell firearms.

“We sell guns to good people,” the ad says in large white letters on a black background in the current issue of Canada’s leading firearm magazine. “And we will oppose any government that tries to take those guns away.”

Neither the large text nor the small print mentions Bill C-71. The ad is one of the only pages in the 64-page publication that doesn’t show a firearm or shooting gear.

“For us, it’s not just about selling guns,” Mendel, who placed the ad, told TheGunBlog.ca today by telephone. “It’s about making sure that our kids and our grandkids and their grandkids have the ability to use their guns in Canada for their legally intended purposes.”

Gun owners, businesses and rights groups are ramping up action against the Liberal government’s planned legislation as it snakes through parliament.

The Canadian Sporting Arms and Ammunition Association and Wolverine Supplies Ltd. are among business entities that have spoken out against the proposed law.

The latest issue of Calibre was recently mailed to 26,000 subscribers across Canada, and 10,000 additional copies were shipped to gun shops across the country. The Wanstalls advertisement is on page 27.

Its simple message and stark design made it one of TheGunBlog.ca’s most shared and “liked” Twitter posts after a photo of the advertisement was published yesterday evening. (The tweet about this article is here.)

“I’d love to see more shops with this mindset,” replied @InvictusManeo15. “I would go out of my way to support them because of it.”

“Absolutely, followed them and hope this shows other retailers the way,” said @StephenArksey.

Shooting is one of Canada’s most-popular activities, and more than 2 million men and women have gun licences. PAL holders must take RCMP-approved safety courses, pass written and practical exams and are monitored daily by the federal police.

Even with a PAL, many of the world’s most popular firearms are banned, and it’s a crime in most cases to carry a firearm for protection.

You can also go to prison if you have a gun without a licence, fail to renew a licence on time, or safely transport or store a firearm in a way that isn’t mentioned in the law.

Find this useful? Subscribe. You won’t find it anywhere else.

Q&A With Matt Mendel of Wanstalls

Following is a Q&A with Mendel. He spoke today by telephone from Wanstalls in Maple Ridge, British Columbia, about 45 km east of  Vancouver.

The interview was edited for clarity.

What motivated you to place the ad and design it this way?

The motivation was Bill C-71.

We worked closely with Calibre magazine. We wanted something simple, bold, and that could not be mistaken for anything else.

The tone of the ad is edgy, provocative, maybe even hardcore. How would you describe it?

There’s a lot of misinformation out there. Like when the prime minister of your country is tweeting that you don’t need a gun licence to buy a gun.

Our business philosophy is that we’re straight up and honest. If people take it as a bold statement, that’s great. I hope that they do.

More gun legislation does not equate to less crime.

We’re all politically active here in the shop.

Did you consider teaming up with other stores, or with the Canadian Sporting Arms and Ammunition Association, the main industry group?

Craig [Jones, co-owner of Wanstalls] is the West Coast board member for the CSAAA.

If we see it wrong, we call it.

All the ads come out of our own pockets.

Was this a one-off ad, or part of a series?

For the next two months, we’re not advertising guns in Calibre, we’re advertising on what’s going on.

What has the response been?

A few customers came in and complimented us on it. A few other government employees were a bit miffed. Overall, the response has been very positive.

What do you want people to know?

One of the biggest things that we want people to know is that part of being a gun owner in Canada is being knowledgeable, and knowing whose in power. If there’s a misuse of power, it’s important that we all know about it.

In this industry, it’s unfortunate how slow news travels sometimes.

We’re a very politically minded store. For us, it’s not just about selling guns. It’s about making sure that our kids and our grandkids and their grandkids have the ability to use their guns in Canada for their legally intended purposes.