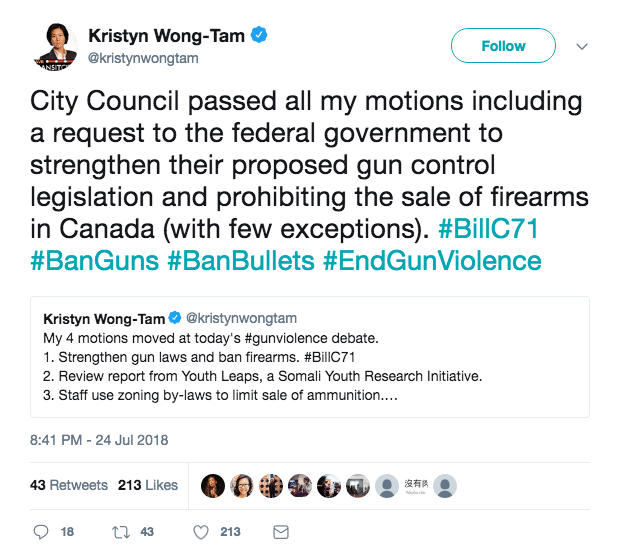 TheGunBlog.ca — Toronto City Council passed a motion last night asking the federal government to ban the civilian ownership of handguns and semi-automatic firearms in Canada, seeking to confiscate the property of responsible citizens and disarm men and women it views as criminals.

Mayor John Tory led the vote of 40 in favour versus 5 against Motion 9a proposed by Councillor Kristyn Wong-Tam, according to results on the Toronto City Hall website.

Excerpt of Motion 9a, emphasis added:

That City Council request the Government of Canada to strengthen its proposed gun control legislation in Bill C-71, An Act to amend certain Acts and Regulations in relation to firearm, by:

c. prohibiting the availability, sale, possession and use of handguns, assault rifles and semi-automatic firearms in Canada, with the exception of the Canadian Armed Forces, police services or other entity that is authorized to possess firearms with legal obligations imposed by the municipal, provincial and federal governments.

The landslide vote serves as the clearest and loudest wake-up call to hunters, plinkers, collectors and competitors across the country that elected officials want to take away their firearms. (Toronto Star used this quote.)

The Liberal-led federal government of Prime Minister Justin Trudeau is already in the midst of passing Bill C-71 to broaden prohibitions and make it tougher for vetted individuals to buy, sell or transport guns.

The councilors spent hours last night slandering Canada’s 2.1 million federally licensed firearm owners and accusing them of supplying weapons to street thugs and murderers. They didn’t provide any evidence for the accusations. (Watch the replay.)

A countrywide ban on handguns and semi-autos would eliminate some of the most-popular firearms in Canada.

“I just want to be able to train and represent Canada in a sport enjoyed by millions around the planet,” said Allan Harding, who passed through Toronto two weeks ago en route to setting a new record at the Canadian National Pistol Championships north of the city. (Check him out on Twitter, no account required.)

A leading public-relations company has advised the Liberals to further restrict shooters to win the next election in October 2019.

“Gun control presents an untapped opportunity for Justin Trudeau and his team to grow and solidify the voting base that gave them a majority in 2015,” David Rodier and Elliott Gauthier of Hill+Knowlton Strategies said in Policy Options magazine in March, in their analysis of a nationwide survey on guns.

Rodier has advised Allan Rock, a key minister responsible for the punitive Firearms Act of 1995, as well as the Canadian Coalition for Gun Control.

Last week Peter Donolo, the vice chairman of Hill+Knowlton in Canada, wrote an opinion article in the Toronto Star urging the government to “ban handguns” and “ban sniper rifles and assault weapons.”

The Remington 700, advertised as the No. 1 bolt-action rifle of all time and popular with Canadian hunters, is used by U.S. Marine Corps snipers.

“I doubt the feds will pick this up,” Tony Bernardo, the executive director of the Canadian Shooting Sports Association, told TheGunBlog.ca. “We’re just over a year from an election. However, if the Liberals get re-elected, that’s a whole other game.”

Council also passed a motion last night asking for provincial and federal help to ban the sale of handguns and handgun ammunition in Toronto.

The city’s leaders blame hunters, farmers, recreational shooters and competitors for a wave of shootings in Canada’s largest city.

Nobody on council offered evidence for how restricting licensed, honest and responsible gun owners would stop murderers, robbers and rapists.

“We have to get rid of guns,” Councillor Janet Davis said during the session. She is seeking to shut down the last shooting range in Toronto. 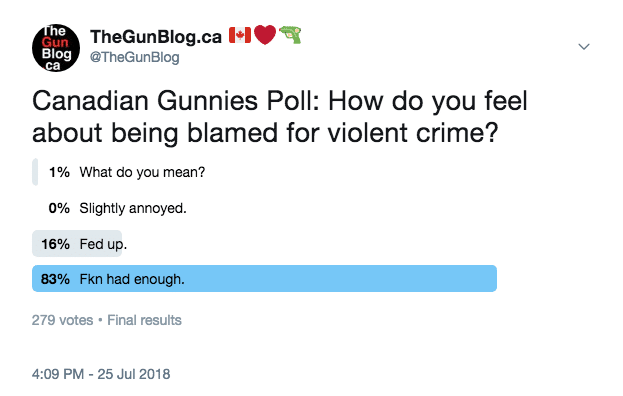 On July 22 a mentally disturbed man shot 2 people dead and wounded 13 others on Toronto’s Danforth Avenue before being stopped by two police officers armed with loaded pistols. News reports say he didn’t have a mandatory firearm Possession and Acquisition Licence and used a stolen handgun.

Canadian shooters would be excluded from in the Olympics if Toronto council’s motion gains sway. The modern Olympics were founded by a champion shooter, and shooting is one of the original sports in the games. It’s also one of the most-popular and safest sports in Canada. 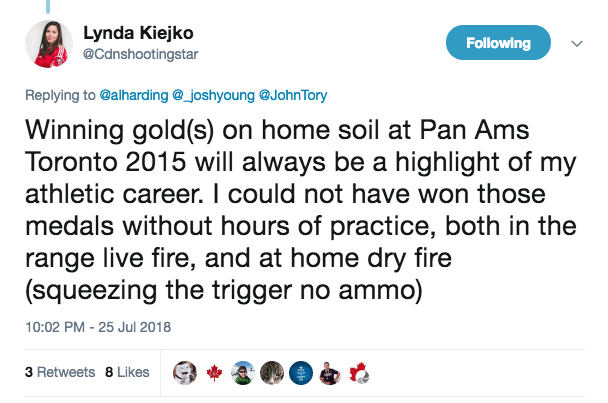 “Due to recent events, I just posted the following,” Maya Miller, a co-owner of Solely Outdoors near Toronto, said tonight by e-mail. “Supporting our lobby groups is the only way to preserve our rights to own firearms. So from now until the end of August, Solely Outdoors will donate 5 percent of all handgun sales to the Canadian Shooting Sports Association (CSSA).”

The councilors ignored Toronto’s surge in stabbings at their session last night. They didn’t propose banning vehicles after a man murdered 10 people and injured 16 with a van in April in one of the deadliest massacres in Toronto’s recent history.

“City Council passed all my motions including a request to the federal government to strengthen their proposed gun control legislation and prohibiting the sale of firearms in Canada (with few exceptions),” Wong-Tam said last night on Twitter.

City Council passed all my motions including a request to the federal government to strengthen their proposed gun control legislation and prohibiting the sale of firearms in Canada (with few exceptions). #BillC71 #BanGuns #BanBullets #EndGunViolence https://t.co/DvPMQtE7F0

“The Liberal government is under tremendous pressure from their rural caucus,” she was quoted as telling Global News, which reported on the motion earlier. “The MPs who represent urban centres … understand that far too many people have access to guns, but they are under pressure within their own party to cave in to the interests of the rural MPs.”