Use NoGunBanCanada.com to Send Form Letters to Ministers

You can use the letter-writing platform developed by Bulls Eye London to print and send pre-written letters to key ministers and officials.

The platform joins TheGunBlog.ca and OneClearVoice.ca in offering tools to challenge government plans to take away more guns from hunters and sport shooters with a federal firearm licence.

Scott Patience, the owner of Bulls Eye London, decided to create the website last week after the prime minister ordered an examination of a “full ban on handguns and assault weapons.”

Hundreds of thousands of gun seizures are already underway because of laws passed by the prime minister’s political party in 1995.

More are in the works under Bill C-71, a law he proposed in March.

“You need to be part of the discussion, part of the input process,” Patience said. “Not only what is proposed, but what isn’t proposed.”

Elected officials give more weight to personal visits, phone calls, e-mails and letters over form letters. Many voters like pre-written templates because they take less effort to produce and send.

Bulls Eye London is a gun store based in London, Ontario, about 185 km southwest of Toronto. Patience, who shared a message on CanadianGunNutz, said he’s aiming for 100,000 downloads. He got 1,380 in the first 14 hours.

He developed the website with John Fitzgerald, the president of the Crumlin Sportsmen’s Association near London, after consulting with the Canadian Shooting Sports Association.

NoGunBanCanada.com doesn’t mention the prime minister, doesn’t mention any political party and doesn’t include any corporate branding. It doesn’t collect or track any personal information. Anyone can use the templates whether they own guns or not.

“We want to propagate this as wide as possible,” Patience said. “It’s completely non-partisan. It doesn’t even mention us.”

How it worked when I tried today:

The website says the letters will change in a few weeks. For now they are addressed to the prime minister, the leader of the opposition, and four ministers with responsibilities related to hunting, heritage and sport, and firearm licensing, registration and confiscation.

“When politicians are talking about something, they start to give it momentum within their own party and within government caucus,” said Patience. “It’s hard to walk things back. We want them to have a physical manifestation of our displeasure over any potential legislation so that it will affect their thought process as they think about it.” 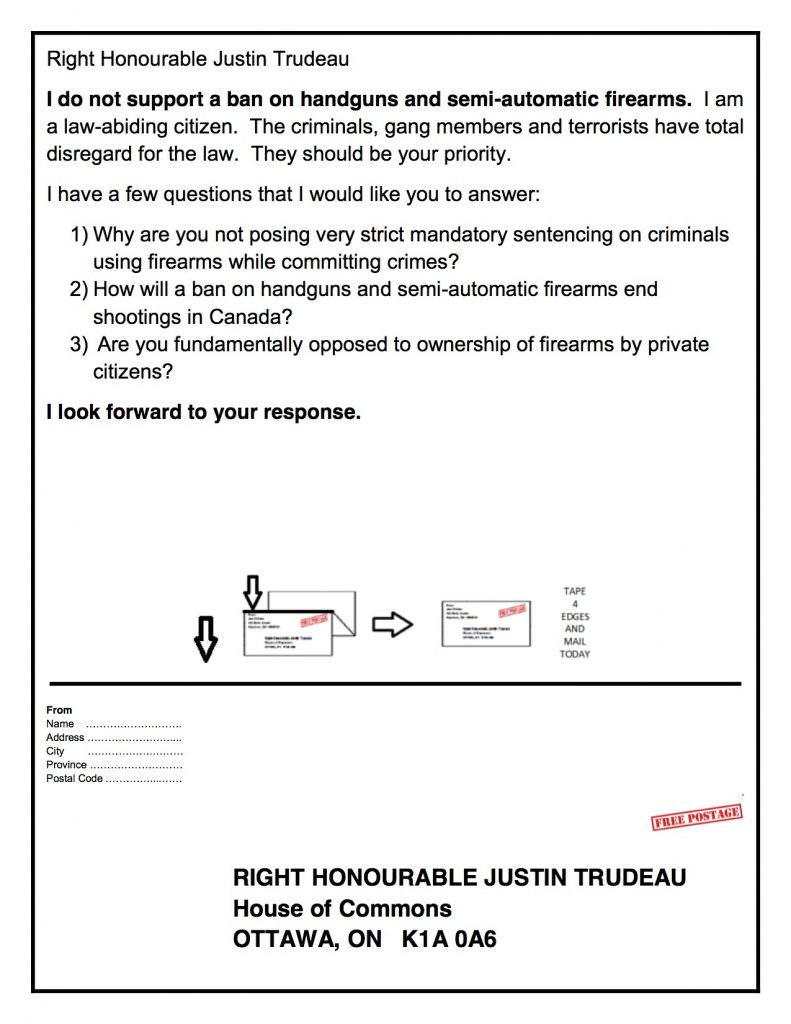