Use OneClearVoice.ca to Easily Tell Your MP You Oppose Bill C-71 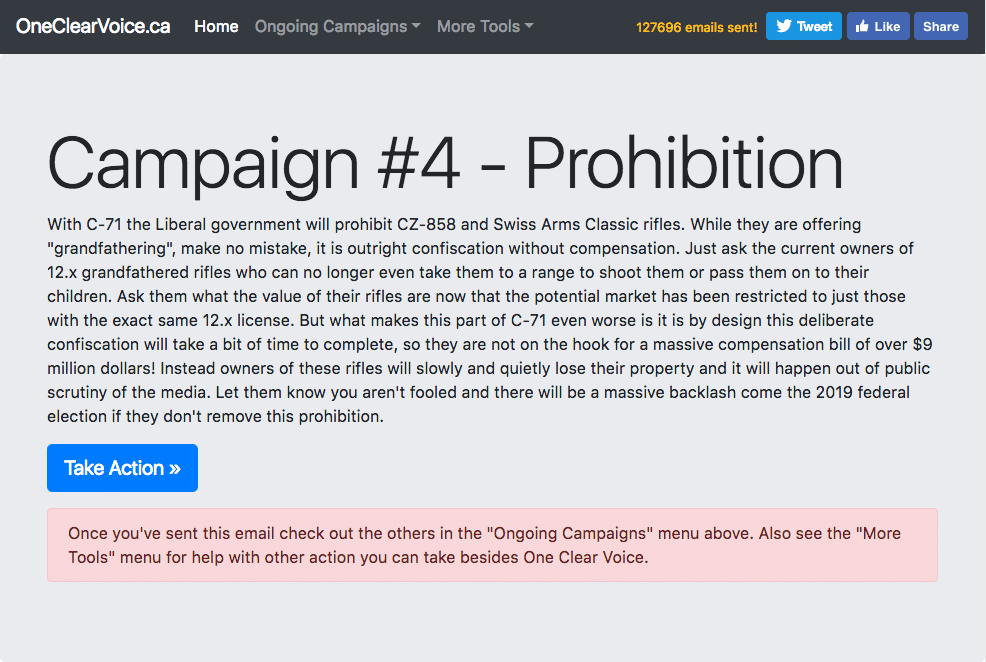 TheGunBlog.ca — The Canadian government proposed a law to ban more guns a week ago. Within hours, Doug McComber had set up OneClearVoice.ca. In a few mouse clicks and less than a minute, it tells your elected officials that you oppose Bill C-71.

TheGunBlog.ca interviewed Nova Scotia-based McComber by e-mail over the past few days. The Q&A was edited for clarity.

Who is behind OneClearVoice.ca, who runs it and pays for it?

It’s just me. I’m a “full-stack” web developer by trade and back when the CZ 858s and Swiss Arms went “Prohibited” [in 2014], I created the site to make things easier for people. At that time it also did print letters but the interface was clunky. After C-42 the site languished and I eventually let the domain registration lapse.

In the days leading up to C-71’s announcement I thought, why not dust it off. So I re-registered the domain and started writing a new site from scratch, this time more focused and email only to keep things simple for the end user.

I paid for the registration and the web server out of my own pocket.

Let the Liberal government know how you feel about bill C-71 at https://t.co/y0IIXP5FV5 #IamTheGunLobby #C71

Does OneClearVoice.ca have any political affiliation?

OneClearVoice is in no way affiliated with any party or organization. It is very much a solo effort. Except spreading the word, of course. That is pure grass roots.

How long has the campaign been active?

The site went live a few hours after C-71 was announced by the Minister of Public Safety.

Tell the government what you think of their new gun control bill. Let them know we're not going to stand for it. https://t.co/SAgPkW3Zlw #IamTheGunLobby

Why should people use OneClearVoice.ca versus something like Change.org?

In my opinion there is only one petition site worth using and that’s the official parliamentary one. And even then the Liberals have demonstrated several times already that they barely pay lip service to those.

Email (and letters, faxes, phone calls, in person visits) has an impact.

Whether or not we can get the bill changed or scrapped remains to be seen. But if at the very least we scare, yes scare, them into losing their desire to do more, then that is better than nothing. I don’t see a petition managing that. Plus there is a certain devilish pleasure I get from knowing I’m helping to fill certain elected official’s inboxes!

Why did you choose this approach?

People are lazy. I’m not being mean, I’m lazy too. Many would never write and mail a letter, but thousands will click a few buttons and send an email. Even if the bulk aren’t read, they are counted in some way and our “pushback” is felt.

How do you get the info to populate the details of a person’s member of parliament?

I always source straight from the public government servers: parl.gc.ca and ourcommons.ca

Multiple campaigns.  By campaign, I mean an email on a specific topic or theme that targets a specific group.

Campaign #1 is the immediate “Hell No!” collective shout from the community.

Campaign #2 targets a handful of MP’s (both Liberal and NDP) who won their ridings by a margin of 5% or less and lets them know they are vulnerable.

Campaign #4 – Prohibition – of https://t.co/L5iAYxyJek is now live. Don't like government confiscation (and no compensation)? Tell them how you feel about it! #BillC71 #OneClearVoice #IamTheGunLobby

How effective is this?

We’ll know if there are changes to the bill in committee.

I would certainly agree that personal letters and especially handwritten mailed letters have more weight. But I would argue that 40,000 emails from a campaign is “louder” than 1,000 handwritten letters. Especially in 2018 where government (both political and bureaucratic) is embracing technology such as social media and largely abandoning paper.

If someone wants to personalize the letter that is great. If not, it still adds to the volume.

I try to keep the letters short. But my experience in letter writing to MP’s is that your local MP reads it, the ministers don’t. So depending on the target of the campaign, the letter’s content either is intended to have an impact or the mere existence of the letter in opposition to the bill is.

What do you say to people who view this as spam?

It is not spam because it is not one entity sending out mass email, it is thousands of individuals sending the emails from their own accounts on their own computers and phones.

Through the forums I’ve learned that people are also changing the emails, adding their own and sometimes swapping out the entire body for something they wrote.

Should people send a single letter, or repeat?

I recommend a single letter unless they edit the letter themselves the second time.

How has the response been?

From MPs? No personal replies to myself only automated ones.  I’ve seen a couple postings in forums of people with Conservative Party MP’s getting replies, that’s it.

From the gun community? Overwhelmingly positive. Lots of good suggestions too, which I’ve used to improve the letters as the campaigns progress.

As of right now, 16,719 people have sent 127,724 emails, and the rate at which people are participating (I keep a running count of the “Send” button clicks) has not slowed down. [Editor’s note: You can see the counter on the home page.]

How can people connect with you?

If people want to comment or ask questions I monitor a thread in both Gun Owners of Canada and Canadian Gun Nutz. Easy to find, just search for oneclearvoice.ca