Gun Licences Rise to Record in June After 21 Quarterly Increases 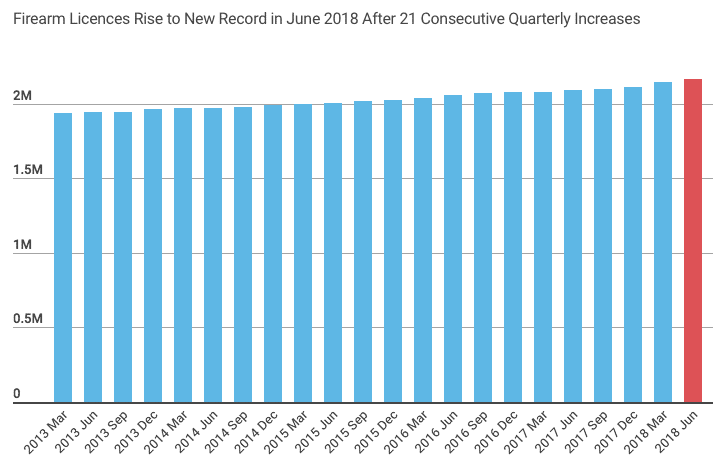 TheGunBlog.ca — The number of Canadian men and women with a gun licence rose to a record at the end of June after 21 consecutive quarterly increases. People are applying for the permits to go plinking or hunting with family and friends and to compete in shooting sports across the country and the world.

The country counted 2.169 million individuals with a firearm Possession and Acquisition Licence (PAL) at June 30, the Royal Canadian Mounted Police told TheGunBlog.ca on Aug. 10 by e-mail in response to questions.

That compares with 2.111 million PAL holders at the end of December, more than previously calculated.

TheGunBlog.ca thanks the federal police for having provided the data. To the best of our knowledge, we are the first to publish the info to June.

The fastest growth was in permits to buy handguns, AR-15 rifles and other so-called “Restricted” firearms popular in sports such as IPSC, IDPA and 3-Gun. All lawful firearm owners and their guns are tightly restricted.

Hunting and sport shooting are among Canada’s safest, most-popular and most-Canadian activities.

Statistics and surveys show about half a million more adults have a gun licence than the number who play hockey.

In addition to individuals with PALs, millions of unlicensed family and friends shoot under the supervision of a licence holder.

It’s frequent to have a licensed man shoot with his permitless spouse and children, or for a group of unlicensed friends to visit the target range guided by safety officers.

Almost 60,000 people passed the mandatory safety courses, tests and background checks to obtain their PAL in the first half of the year. That’s the most of any January-June period in at least a decade, according to calculations by TheGunBlog.ca.

They got the permits as hostility toward lawful gun owners rose.

The government is in the midst of passing Bill C-71 to confiscate more firearms from PAL holders and make it harder for them to buy, sell and transport their guns. All of the measures in the proposed law would further restrict lawful gun owners.

A massacre in February at a high school in Parkland, Florida, a wave of criminal attacks in Toronto this year and a slaughter in Fredericton, New Brunswick, last week have fueled anti-gun emotion in people unfamiliar with firearm users and the law.

Each of the mass attacks was stopped by armed people, as is typical. Canada’s deadliest attack in almost three decades, by a driver who killed 10 pedestrians with a van in Toronto in April, was also stopped by an armed policeman.

Canadian law requires a PAL for private individuals to legally buy firearms or ammunition, and strictly regulates how guns are transported, stored and used for hunting or sport. A separate permit is required to legally carry a gun for protection, but police generally refuse to grant it.

Canada has decades of evidence showing lawful hunters and sport shooters are among the safest and most responsible people in the country.

Many gun owners view firearms as part of their heritage, culture and traditions. Youth learn marksmanship in school, Cadets or Project Mapleseed. They go on hunting trips growing up, or in the case of Lynda Kiejko and her sister, become elite pistol competitors after watching their father shoot for Team Canada in the Olympics.

Amanda Fisher and other women are getting licences without any related experience to learn new skills, enjoy competition and the outdoors, and make new friends.

Almost 90 percent of PAL holders are men, but the number of women with licences has jumped by more than a third in the past five years, four times faster than the pace of increase for men.