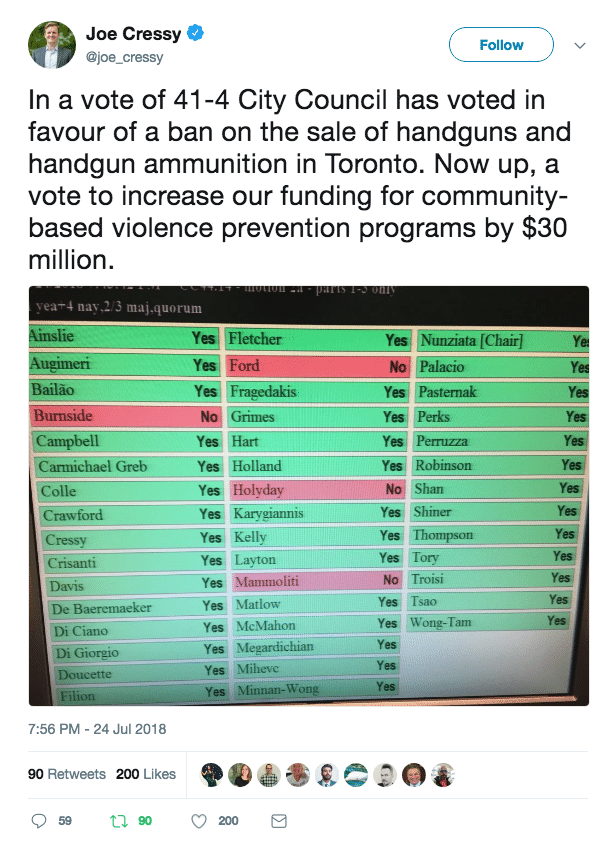 Toronto Council voted 41 in favour and 4 against the motion to ask the federal and provincial governments to prohibit the sale of guns and ammo inside the city, Councillor Joe Cressy said on Twitter this evening after the vote.

Cressy, a former member of parliament for the socialist New Democratic Party, tweeted this morning that he proposed the motion.

“This is heartbreaking,” said Allan Harding, who passed through Toronto two weeks ago en route to setting a new record at the Canadian National Pistol Championships north of the city.

“Three years ago I was in Toronto for the 2015 Pan Am Games competing in target sports,” the British Columbia-based athlete said. “I’m blown away at how quickly government tries to act, but how irresponsible sweeping policies can be and how ineffective this will actually be at curbing gun violence.”

The vote marked the end of a session lasting hours where councillors took turns slandering Canada’s 2.1 million target competitors, recreational shooters, hunters and farmers who have a firearm Possession and Acquisition Licence (PAL) issued under the authority of the federal police.

They accused lawful gun owners of supplying firearms to street thugs and contributing to a wave of violence in the city, including the Danforth man’s attack that left 2 people dead and 13 in hospital. They didn’t provide evidence for the accusations.

“Why does anybody need to have a gun in the city of Toronto, aside from police officers and very narrowly specified others, like people in security trucks and what not,” Tory said as the concluding speaker. “It’s a very narrow definition for a good reason, because quite frankly, people in the City of Toronto don’t need handguns.”

The surging violence this year shows the failure of prohibition and the irresponsibility of politicians who vote for it. Canada has squashed the rights of honest gun owners since Confederation under the pretext of “public safety” with bans, confiscations and restrictions.

The jump in shootings and stabbings this year proves tougher laws don’t stop people intent on harming others.

Using a rise in deadly shootings in 2005 to punish the innocent, the city government of Mayor David Miller a decade ago led the closure of gun stores and target clubs across Toronto, including a range at Union Station and another at the University of Toronto’s Hart House.

Al Flaherty’s Outdoor Store holds out as the city’s last gun shop and one of Canada’s biggest independent firearm retailers.

This year’s surge in criminal shootings and stabbings shows Miller’s shutdowns failed to stop criminals or improve the safety of residents. The closures served only to rob sport shooters of places to train, erase decades of sporting culture and kill jobs.

The vote also tells Toronto’s 100,000 men and women with PALs that elected leaders blame them for supplying firearms to criminal offenders, even though PAL holders are one the safest groups in the country.

A statistical analysis by Gary Mauser showed that Canadians without a licence are more than three times as likely to commit murder than people with a permit. Maintaining a licence requires passing a daily background check by the federal police.

Neither the mayor nor the councillors showed how new prohibitions on licensed sport shooters would stop violent outlaws.

Canada already has a country-wide ban on murder and assault that covers Toronto. The only people who will be disarmed by any new laws are those who obey the law, not murderers, robbers or rapists.

The National Post reported today, citing an unidentified source, that the Danforth attacker didn’t have a PAL.

Shooting is one of Canada’s most-popular and safest sporting activities, and more Canadian adults have a gun licence than the number who play hockey, baseball, soccer or tennis. It’s illegal to buy a firearm or ammunition without a permit.

It costs hundreds of dollars and often takes four to six months to get a licence, and buying a gun requires a series of police permissions, background checks and authorizations. Many guns are already banned in Canada, including some of the world’s bestselling handguns and rifles.

“We have had in this country an elimination of gun-control legislation,” Davis said. “It costs $125 for a course and $80 for a licence and bang, you can go shopping.”

More than 90,000 people, mainly police, are authorized to carry loaded firearms every day in Canada. Toronto has some 5,000 armed police and armoured-car guards. In addition, about 600,000 private individuals across the country have licences to buy handguns.

In April, an officer pointed his loaded gun to stop a man who used a van to assassinate 10 pedestrians in one of the deadliest massacres in Toronto history. Stabbing homicides in the city are surging, but the politicians didn’t discuss banning vans or knives.

“We have to get rid of guns,” Councillor Janet Davis told Council as she proposed a separate motion to close the last gun range in the city. “I don’t believe there’s a need for a shooting range in Toronto.”

The council vote shows the intent to disarm honest Torontonians, but getting provincial or federal support could take time. Council is scheduled to have its last meeting tomorrow before residents elect a new mayor and councillors in October.

Also today, federal Minister of Public Safety Ralph Goodale told reporters he will consider stricter handgun laws, suggesting he may explore measures beyond those in Bill C-71 to confiscate more guns from licensed owners and make it even harder for them to buy, sell or transport firearms.

“The gun-violence issues that have come up in Toronto are very serious and my heartfelt condolences go to all the families,” Harding said. “Banning something does not prevent access. There is an underlying problem here, and this is not addressing it.”

Alongside with the proposed $30 million investment into community violence prevention programs, here’s my motion calling on the Province and the Feds to ban the sale of handguns and handgun ammunition in Toronto. pic.twitter.com/ajhRTMWUUB