Gun Imports Rise to 12-Month High in May, Rebounding From Slump 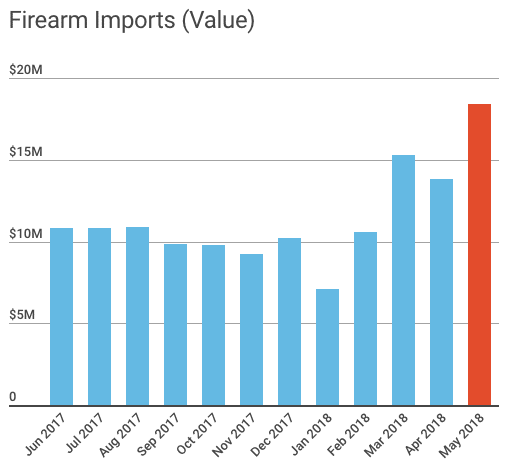 TheGunBlog.ca — Canadian gun imports rose to a 12-month high in May from a five-year low in January, as the firearm industry grapples with early shipments, uneven demand and the threat of new legal restrictions.

Shooting is one of Canada’s most-popular sporting activities, and almost every one of the roughly 1,000 guns bought each day comes from abroad. Monthly import figures provide one of the only glimpses into the economics and expectations of the firearm industry because companies keep their books private.

The seasonal cycle of rising imports in the first half of the year followed by declines in the second half has turned into a whipsaw over the past year.

Incoming gun shipments surged to a record high in May 2017 as companies stocked up in anticipation of government import restrictions, then crashed over the next eight months.

The so-called Firearms Marking Regulations on imported firearms are now set to take effect Dec. 1, and Bill C-71 is in the works as a new law to ban more guns and further restrict hunters, sport shooters and gun shops. The government is also looking to phase out lead ammunition.

The value of inbound firearm shipments climbed to $18.4 million in May, the most since the monthly record in May last year, according to Statistics Canada data published July 6.

“The May ‎spike is not reflective of a sales spike,” Winkel, president of the Canadian Sporting Arms and Ammunition Association, told TheGunBlog.ca yesterday by e-mail. “It is reflective of the vendors flush with inventory and shipping fall orders earlier than I ever remember. The industry is in the typical mid-summer blues.”

It typically takes three to six months from when they place a purchase order until shipments arrive, so the May imports reflect the outlook late last year and early this year, before the government proposed Bill C-71. The ruling Liberal Party had said in its 2015 election campaign that it was planning new constraints.

A single delivery from a single manufacturer can lead to large swings in the data for any given month, so figures for a single month don’t indicate a trend. The monthly import data published by Statistics Canada don’t mention brands or companies.

Find this useful?  You won’t find it anywhere else. Subscribe below.

The firearm industry faces slowing growth in the number of people getting gun licences, according to an analysis by TheGunBlog.ca in March.

Companies across the country are also seeing different levels of demand depending on the clients they serve. Hunters, collectors, recreational shooters and competitors each buy different types of firearms, ammunition and other gear.

An executive at a major importer of rifles, shotguns and pistols said July 6 demand for handguns and bolt-action rifles remains strong. Canadian Tire Corp., one of the country’s biggest retailers of shooting supplies, said in February it expected demand for hunting gear this year to be “flat.” 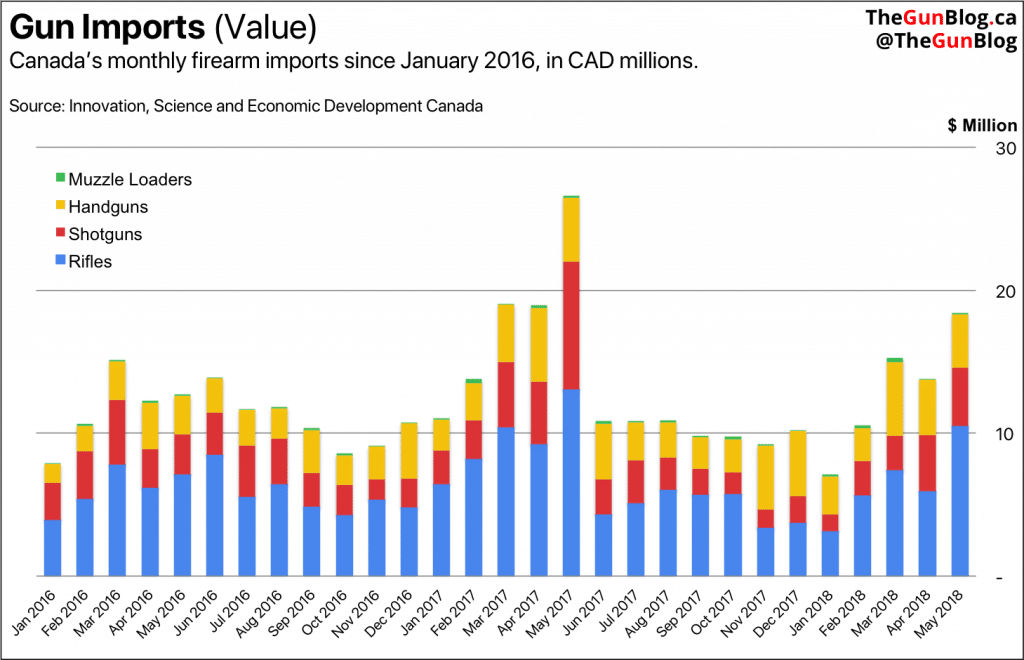