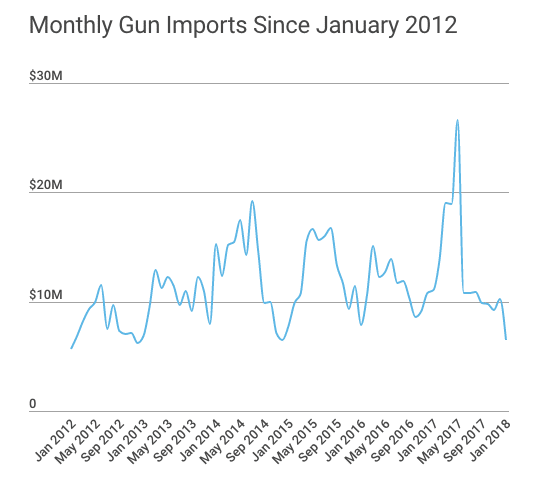 The slump comes as the Liberal government prepares a law to further restrict lawful hunting and sport shooting.

Imports sank to $6.5 million in the first month of the year, Statistics Canada said March 7 when reporting the latest data.

January was the weakest month for incoming guns since December 2012 and also the lowest January since 2012, as demand fell in the western and eastern provinces.

“Sales are still very, very much down,” Wes Winkel, president of the Canadian Sporting Arms and Ammunition Association, the country’s main industry group, said today by telephone. “Because 2017 sales were so low, it means dealers still have their 2017 guns, so they don’t import.”

The number of handguns from the U.S., the No. 1 firearm exporter to Canada, sank by 62 percent in January from December. Shotguns from Turkey, the biggest country of origin last year for the items, collapsed by 79 percent. Finland sent 2 rifles in January compared with 382 in December.

Shooting is one of Canada’s most popular sporting activities, and almost every gun comes from abroad. Import figures provide one of the only windows into the economics and expectations of the firearm industry since businesses keep their accounts private.

Companies order the guns that they expect clients will buy or ones that have already been contracted, such as for police. They buy less when they expect demand to slow.

It typically takes three to six months from when companies place a purchase until shipments arrive, so the latest figures reflect the outlook in late summer and fall.

Fires and floods in British Columbia and Alberta last year shut down hunting and shooting activities, worsening the effects of a two-year recession in Alberta that cut spending on guns and gear. Wholesale Sports Canada Ltd. went out of business, closing 12 hunting, fishing and outdoor stores from Manitoba to British Columbia.

“The west is still very, very down,” Winkel said. “The east is a little bit better, but it’s still down.”

A drop in handgun shipments from the U.S., mainly Arizona, was the biggest single drag on January, wiping out $2.6 million in import value compared to December. Lower shotgun imports from Turkey erased almost $600,000 from the total. Fewer rifles from Japan and Finland cut more than $500,000.

Imports tend to rise in the first half of the year and fall in the second half, and figures for a single month don’t indicate a trend. Looking three months at a time, November, December and January had the lowest shipments since the three months ended February 2015.

Imports are also diving as manufacturers ramp up paperwork on store owners, making them take courses and sign agreements promising to not sell items to enemy states. Each company has its own process since there isn’t an industry standard.

“I have to take compliance training from Smith & Wesson, Remington, Browning, and other companies,” said Winkel, who owns Ellwood Epps Sporting Goods about 150 km north of Toronto. “Until those are done, we can’t order anything.”