Glock’s First .22 Pistol Coming to Canada in March, G45 Is Next 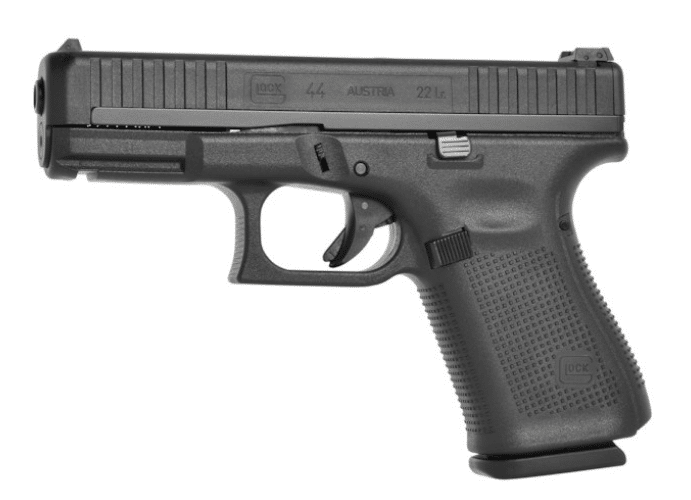 TheGunBlog.ca — Glock, the world’s biggest maker of handguns, said it aims to have the Canadian version of its new model 44 pistol chambered in .22LR in stores in March.

It presented the Glock 44 this morning as the first .22LR in its 37-year history making guns. The semi-automatic pistol is similar in size to the 9 mm Glock 19, the world’s most-popular handgun.

The Canadian version will be offered at $520, Cassells said.

It will have a 106-mm barrel to comply with federal law instead of the 102 mm standard. It will come with two standard 10-round ammunition magazines.

“I’m hoping sometime in March we’ll have them on the dealer’s shelves,” Cassells told TheGunBlog.ca today in a telephone interview. “I think it’s going to be an extremely popular pistol for us, both in the U.S. and Canada. We need to make sure we get our Canadian orders in.”

Now Available for Pre-Order. PRE-ORDER: Glock 44 Rimfire Semi-Auto Pistol, 22LR, Black $100.00 Deposit Full Price: $520.00🇨🇦 Tentative ETA: To Be Determined (eta subject to change without notice. updates provided when available.) Buy now and reserve yours while supplies last! We will ship as soon as we receive them. ⚠️Pre-order items may have unavoidable changes in delivery date, price or quantity available and we will notify customers ASAP. Pre-order may be cancelled at any time and the deposit fully refunded.⚠️ * 4.02" barrel shown in image, Canadian version will be longer and we will update specs as soon as possible. Once you start with perfection – you stay with perfection. The Glock 44 is the ideal pistol to start or enhance your shooting experience. The innovative design of the hybrid steel-polymer slide chambered in our first .22 caliber round provides a lightweight and low recoil functionality for optimal control. The Glock 44 was thoroughly tested with a wide variety of ammunition to ensure maximum performance and redefine what small can do. The Glock 44 is a compact size pistol with the ability to adapt to nearly every hand size by using the different backstraps supplied with the pistol. The G44 comes standard with the GLOCK Marksman Barrel (GMB) for increased accuracy and precision. The right equipment is essential. The Glock 44 comes with adjustable rear sights and two load-assist magazines. Everything that a well prepared shooter needs. Caliber: 22LR Capacity: 10 (2 magazines included) Barrel Length: Canadian version TBD Action: Semi-Auto Length (Overall): 185 mm | 7.28 inch (approx) Weight with loaded magazine: 465 g | 16.40 oz (approx) Weight without magazine: 358 g | 12.63 oz (approx) Weight with empty magazine: 415 g | 14.64 oz (approx) Trigger Pull: 26 N System: Safe Action http://www.bullseyelondon.com/glock-44-rimfire-semi-auto-pistol-22lr-black.html

A post shared by BullseyeSuperStore (@bullseyesuperstore) on Dec 11, 2019 at 5:48am PST

Glocks are popular around the world for personal protection, competition and recreation.

Although dwarfed by the U.S., Canada is one of Glock’s largest recurring annual markets worldwide.

He promised to allow municipalities to expel handgun owners through new prohibitions, and to confiscate a quarter-million hunting and sporting rifles.

The complexity of setting up the seizures and the growing opposition to them suggest the plans will fail.

Two years ago Glock started offering a Canadian version of the model 19. It also had a longer-than-normal barrel to satisfy Canadian politicians.

The Made In U.S.A. Glock 44 is “pretty much the same size as a 19. We’ll have 4 mm of barrel sticking out,” said Cassells, who joined Glock about 7 years ago after 30 years with the Toronto police, including 5 years with the SWAT unit, the Emergency Task Force.

“The unique thing about this particular model is that it has a polymer slide as well as a polymer frame,” Cassells said.

The Glock-made .22LR pistol could wipe out demand for conversion kits like one made by Advantage Arms. It sells for $460 at Rangeview Sports in Newmarket, Ontario.

“This is a dedicated .22,” said Cassells. “It’ll be our lowest-priced pistol. It comes with adjustable sights.”

AmChar Canada Inc., Big Rock Sports LLC and European Arms Distributors 1982 Ltd. will distribute the Glock 44 to stores, Cassells said. It will be offered for sale to law-enforcement and military personnel by Rampart International Corp.

It feeds well and works well with all major brands of .22-calibre ammunition.

I shot it along with 30 other people, one gun, for several hours.

No hiccups, no problems. I was very impressed with the reliability.

Glock expects its 9 mm model 45 pistol in Canadian stores next summer, possibly late in the second quarter, Cassells said. It’ll have a longer barrel and mags limited to 10 rounds.

“My plans in 2020 are to do a G45, and that would include a G45 MOS,” Cassells said, referring to Glock’s Modular Optic System for red-dot sights. “It’s going to be a little later in the year because of the release of the 44.”

The company estimates it supplies about 80% of Canada’s law-enforcement agencies. Some are moving to the G45 as they switch to 9 mm from .40 S&W, Cassells said.

He recommends police use the G45 with a Streamlight TLR-7 light.

“The 45 is pretty popular on the professional side,” Cassells said. “You see a lot of agencies going to the 45.”

Like what you’re reading? Members got it by e-mail before it was on the website. Learn about our free and member plans.