TheGunBlog.ca — Two people in Canada have an Authorization To Carry loaded handguns for personal protection, also known as a “concealed-carry permit,” according to a letter from the federal police that was shared today on Reddit.

The Authorization To Carry, or ATC, requires permission from the Canadian Firearms Program of the Royal Canadian Mounted Police. Requests for the permits are almost always rejected.

Even requests for information on the number of permits for protection of life are usually rejected, making this release unique.

“CFP advised that there is two ATC’s for the protection of life in Canada,” said the letter dated Oct. 22 from the RCMP’s Access to Information and Privacy Branch, obtained under access-to-information laws.

The letter, reprinted below, said it followed an earlier response in May. The recipient’s name is blacked out from the image posted on Imgur.com and shared on Reddit.

Note: As of April 2019, One Person in Canada Has Authorization To Carry Guns, RCMP Says

‘The Number Is Two’

“Months ago, a friend of mine had submitted an Access to Info request seeking the number of active permits to carry firearms for protection of life in Canada,” user 22lover said in their Reddit post. “Excluding wilderness workers, trappers, armoured car drivers, etc. He finally got this back last week. The number is two.”

Read: More Than 90,000 Canadians Are Allowed to Carry Guns Every Day 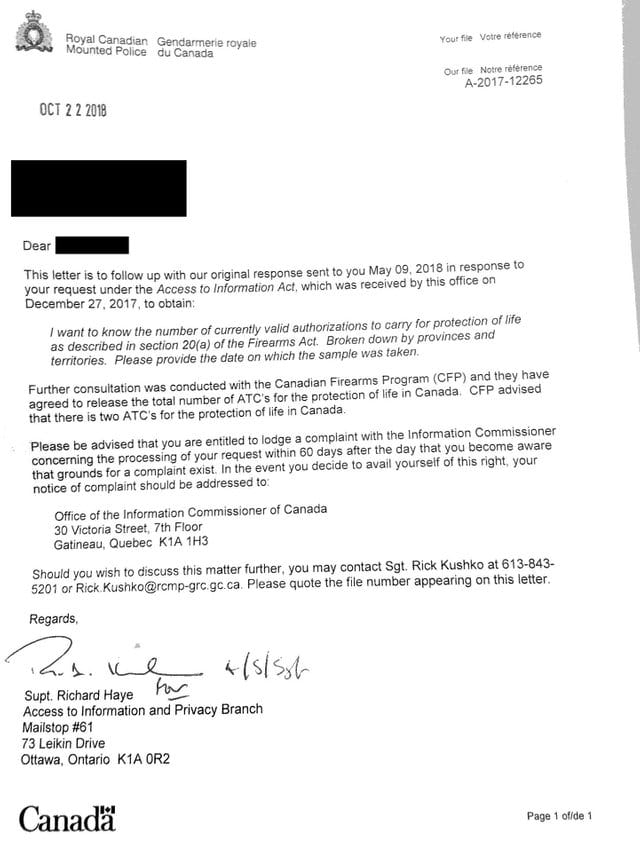 The ATC application includes separate boxes to tick for professionals in the armoured-car industry and for trappers, prospectors or others who work near dangerous animals in remote areas and need to be armed for wilderness protection.

It costs $40 for a one-year application for a professional.

People who carry handguns for protection typically carry them in a holster on their belt. Open carry is generally outside the waistband and allows for quicker access. Concealed carry is often inside the waistband, or under a jacket. The ATC application doesn’t mention concealment.

How much have you invested in Professional Training for armed protection in the past 5 years?

An ATC for personal protection is different from the firearm Possession and Acquisition Licence (PAL) held by 2.2 million Canadian men and women for hunting, recreation and competition. It’s also separate from the Authorization To Transport (ATT) required for any PAL holders to legally move any handgun and many rifles, such as AR-15s.

PALs and ATTs allow hunters and sport shooters to transport firearms unloaded. All their handguns and many rifles must also be disabled with a trigger lock or cable lock during transport and placed in a locked container, making them impossible to use for protection in case of a surprise attack.

Sport shooters can be sent to prison if they transport their handguns anywhere other than between pre-approved destinations along a route deemed “reasonably direct.”

Note: interest can be different than use.

More than 17.25 million men and women in the U.S. have concealed-carry permits, according to a research report in August by John Lott.

Many Canadians have non-resident carry licences from New Hampshire that are valid in other states. Some states don’t require any permission to carry loaded guns openly or concealed.

When the great state of New Hampshire trusts you more than your own government https://t.co/VkBPZymjvE

Hurray to the Great State of New Hampshire! My non-resident concealed carry permit came in the mail today. I… http://t.co/VsbrqJWlMt

Ontario processed 3,600 ATC applications in 2013, the Chief Firearms Officer for the province said in a September 2014 presentation. That seems to contradict a July 2014 report by Global News based on RCMP information saying applications across Canada from 2011 to 2013 rose from 386 to 564.

Following is an excerpt from Authorizations to Carry Restricted Firearms and Certain Handguns Regulations, corresponding to Statutory Orders and Regulations 98/207 of the Firearms Act:

Protection of Life
2 For the purpose of section 20 of the Act, the circumstances in which an individual needs restricted firearms or prohibited handguns to protect the life of that individual or of other individuals are where

(b) police protection is not sufficient in the circumstances; and

(c) the possession of a restricted firearm or prohibited handgun can reasonably be justified for protecting the individual or other individuals from death or grievous bodily harm.

Lawful Profession or Occupation
3 For the purpose of section 20 of the Act, the circumstances in which an individual needs restricted firearms or prohibited handguns for use in connection with his or her lawful profession or occupation are where

(b) the individual is working in a remote wilderness area and firearms are required for the protection of the life of that individual or of other individuals from wild animals; or

(c) the individual is engaged in the occupation of trapping in a province and is licensed or authorized and trained as required by the laws of the province.