TheGunBlog.ca — The Canadian government’s Bill C-71 is a “piece of crap” that will threaten the lives of farmers and penalize honest hunters and sport shooters while doing nothing to stop criminals, Senator David Tkachuk told the Senate today.

Tkachuk, a member of the opposition Conservative Party, said the proposed law fails to address the causes of suicide and violent crime, such as drug and alcohol abuse, a brutal prison system, depression and family dysfunction.

“I can safely say that Bill C-71 will neither reduce crime, nor prevent criminals from getting their hands on guns,” the Saskatchewan senator told his colleagues this evening. “Crime in rural Saskatchewan is on the increase and that isn’t because of guns. Actually, guns are the only protectors that a farmer has.”

“We need to address some of the social issues that are causing the problems, not this piece of crap that we have here,” Tkachuk said, referring to the proposed law. 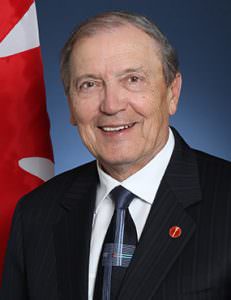 ‘This Bill Should Die’

“The very act of getting a gun licence demonstrates you are not interested in committing a crime. So it is illogical that introducing more paperwork will lead to a reduction in crime. It’s virtue signalling. ‘Look at what we are doing. We are so concerned.’ I’m surprised it doesn’t have a gender and an environmental component,” the senator said.

“I think this bill should die on the Order Paper, and the government of Canada should get busy solving the real problems in rural Canada, and not this stuff that they’re trying to purport to put on us,” Tkachuk said.

The Liberal Party-led government of Prime Minister Justin Trudeau proposed Bill C-71 to ban more guns from lawful owners and make it harder for them to buy, sell, own and transport firearms.

It would criminalize men and women with police-authorized firearm licences who buy or sell any gun without additional permission from the police, or who take certain firearms to a gunsmith without special authorization.

“It appears to have a rather limited public-safety benefit,” Tkachuk said. “It may even be detrimental, especially to those who live in remote or rural communities.”

A public-relations firm that advises the government said in March that new restrictions on farmers, hunters and target shooters present an “untapped opportunity” for Trudeau to win votes from centre-left voters in the next election.

Tkachuk spoke after a speech by Senator Raymonde Gagné of the Independent Senators Group. She was the fourth member of the group to lead discussion in favour of the Liberal bill.

Conservative Leader Andrew Scheer has pledged to repeal and replace Bill C-71 if he is elected prime minister.

Tkachuk said new firearm-import restrictions known as the Firearms Marking Regulations will be part of Bill C-71 and also have zero benefit to safety. The new rules are set to take effect Dec. 1.

He criticized the proposed law for requiring the Royal Canadian Mounted Police to give Quebec the personal details of every Canadian gun owner in the so-called Long-Gun Registry. The RCMP kept a copy while saying it had deleted the records.

I’m opposed to this bill by what it does not do, rather than what it does. It tinkers with guns and gun owners — people who have applied and have gun licences, and know how to use guns, and have to deal with more bureaucracy and more restrictions on their personal freedoms.

Tools vs. Causes of Crime

Criminals engage in criminal acts. They are not particularly phased by breaking another law to commit the crime they’re intent on. They’ll find a way to get a gun illegally no matter how many restrictions you put on them.

[Guns …] They are tools used in crime, to be sure, but they are not the cause.

The bill does nothing about the increase in gun violence that led to it being introduced and that it purports to respond to. Once again this government is more interested in being seen to be doing something than actually doing something.

It appears to have a rather limited public-safety benefit. It may even be detrimental, especially to those who live in remote or rural communities.

There is no measure in this bill to address the growing problem of gun and gang violence on our streets.

I grew up in small town in Saskatchewan. We had about 150 people.

People are going into rural areas. They’re causing tremendous fear …. It used to be in rural Saskatchewan you felt safe. Not anymore. You don’t feel safe anymore.

I’m not a psychologist. I can’t really speak to why people commit suicide. All I know is men use guns, women use other means, they use drugs usually, to kill themselves. What would cause someone to do that, I really don’t know. But I don’t think that has anything to do with the bill that we have before us. I don’t think anything in that bill would prevent anybody from committing suicide with a gun.”