John Tory Asks for Gun Bans or ‘Repositories’ Across Canada 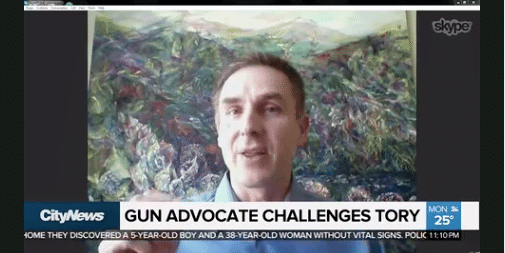 TheGunBlog.ca — Toronto Mayor John Tory officially asked Canadian Prime Minister Justin Trudeau to ban and confiscate all handguns and all semi-automatic rifles and shotguns from all federally licensed gun owners across the country.

In case a handgun ban fails, Tory requested new federal laws to “create gun repositories” where licensed firearm owners across the country would be forced to store all their rifles, shotguns, pistols and revolvers.

City Council requested the federal government to strengthen Bill C-71 by “prohibiting the availability, sale, possession and use of handguns, assault rifles and semi-automatic firearms in Canada,” Tory said in his letter to Trudeau dated Aug. 3 and shared today on Twitter. (Read the full letter below.)

The other measures aimed at the more than 2 million men and women with federal firearm Possession and Acquisition Licences (PAL) include:

The measures are based on a series of motions that City Council passed by a landslide on July 24.

“Thank you for your consideration of these requests to help us send a message that gun violence is absolutely unacceptable in Toronto, or anywhere in Canada,” Tory said in his letter to Trudeau, a downloadable copy of which was shared by the Toronto Star.

The Globe and Mail reported July 26 that Trudeau is seriously considering a handgun ban and will decide on the measure in mid-August. He commented on a ban in Toronto at a July 30 memorial to the victims of a shooting massacre on the city’s Danforth Avenue.

Reporter: “Do you support a handgun ban in Toronto?”

Trudeau: “There’s a lot of things that we’re looking at right now. Obviously there’s a lot of strong emotions going on, grieving, looking at how we can continue to be stronger and more resilient as communities. We are looking at a broad range of things. We’re going to make the right decision for the long term, not just the short term.” (Source: CPAC TV on Twitter.)

I am writing to express my energetic opposition to any new firearm bans or any new measures that unjustly restrict lawful and legitimate firearm users anywhere in Canada.

[Write whatever you are comfortable with, but 1-2 paragraphs is enough.]

(Note: No postage stamp required for the prime minister or MPs.) 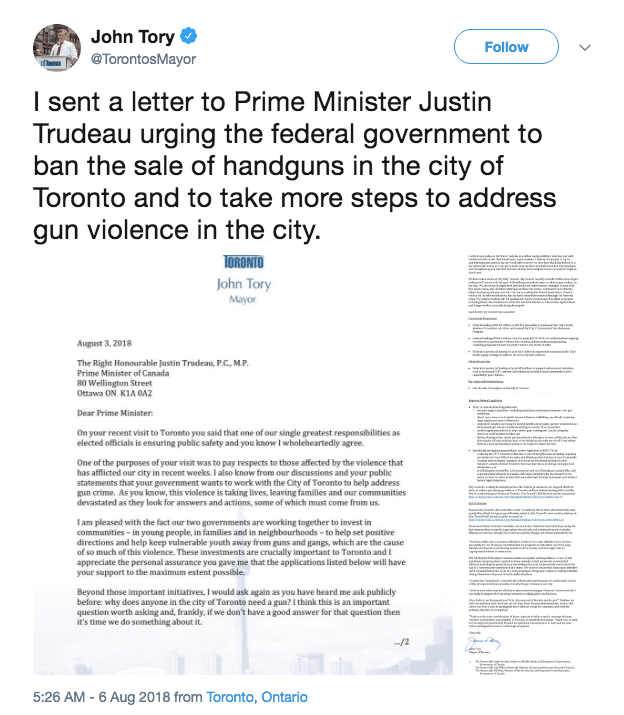 On your recent visit to Toronto you said that one of our single greatest responsibilities as elected officials is ensuring public safety and you know I wholeheartedly agree.

One of the purposes of your visit was to pay respects to those affected by the violence that has afflicted our city in recent weeks. I also know from our discussions and your public statements that your government wants to work with the City of Toronto to help address gun crime. As you know, this violence is taking lives, leaving families and our communities devastated as they look for answers and actions, some of which must come from us.

I am pleased with the fact our two governments are working together to invest in communities in young people, in families and in neighbourhoods to help set positive directions and help keep vulnerable youth away from guns and gangs, which are the cause of so much of this violence. These investments are crucially important to Toronto and I appreciate the personal assurance you gave me that the applications listed below will have your support to the maximum extent possible.

Beyond those important initiatives, I would ask again as you have heard me ask publicly before: why does anyone in the city of Toronto need a gun? I think this is an important question worth asking and, frankly, if we don’t have a good answer for that question then it’s time we do something about it.

We have taken action at City Hall. Toronto City Council recently considered the issue of gun violence in Toronto with the goal of identifying immediate steps to address gun violence in the city. We discussed in depth both prevention and intervention strategies to deal with this urgent issue, and identified strategies in three key areas – community investments, police resourcing and gun control that we are asking the federal government to work with us on. As referenced above, this includes immediate requests through the National Crime Prevention Strategy call for applications and we look forward to other programs including financial commitments under the federal Initiative to Take Action Against Guns and Gangs which is currently being developed.

Enact or amend federal legislation to:

City Council is seeking to understand how the federal government can support efforts to deter or reduce gun and gang violence in Toronto and how federal funding will assist the City in eradicating gun violence in Toronto. City Council’s full decision can be accessed at: http://app.toronto.ca/tmmis/viewAgendaItemHistory.do?item=2018.CC44.14

Beyond City Council’s discussion this week, I would also like to draw attention to the easy availability of bail for repeat gun offenders which in City Council’s view must be addressed. City Council’s full decision can be accessed at: http://app.toronto.ca/tmmis/viewAgendaItemHistory.do?item=2018.MM43.23

I have heard from frontline constables and our Police Chief how frustrated they are by the fact someone they arrest for a gun crime who already had a criminal record or similar offences or who was already out on bail on a similar charge, can almost immediately be back out on the street on bail.

The focus of this ask is on repeat offenders. I believe first-time offenders have the best possibility for our diversion and rehabilitation programs to help them out of the gang lifestyle and become contributing members of our society and bail might well be appropriate for them in some cases.

We ask that the federal government conduct a complete and expeditious review of bail guidelines and procedures applied to those already on bail, previously convicted of offenses involving the possession or use of illegal firearms, or previously convicted of the use of a firearm in the commission of a crime. We want to ensure that repeat gun offenders not be granted bail in the event of a subsequent gun charge and remain in custody until the charges have been disposed of by the judicial system.

Toronto City Council and I endorsed all of these measures because we need a wide variety of the strongest methods possible to deal with gun violence in our city.

I believe now is the time for all of us to take action to stop gun violence. I assure you that I am ready to support the federal government in taking action on this issue.

If we do focus on the question of “why does anyone in Toronto need a gun?” I believe we will conclude that they don’t and we can then move forward with measures, such as the above not with a view to making life more difficult except for criminals, and with the primary objective of saving lives.

Thank you for your consideration of these requests to help us send a message that gun violence is absolutely unacceptable in Toronto, or anywhere in Canada. Thank you, as well, to you and your government for your co-operation and assistance to date and for your stated willingness to look at a full range of options.

The Honourable Jody Wilson-Raybould, Minister of Justice and Attorney General of Canada