My Call to Goodale on Bill C-71: I Was Anxious, But It Was Easy 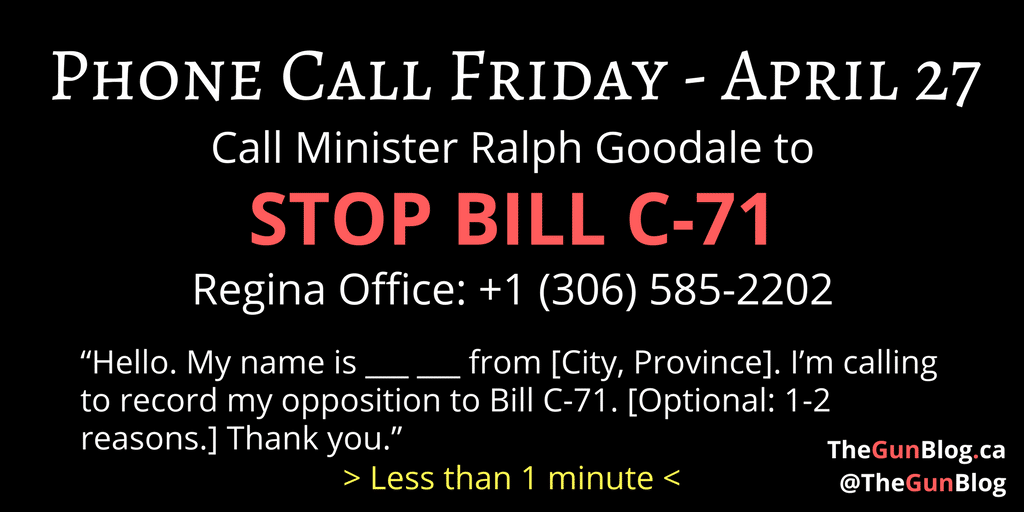 TheGunBlog.ca — I was anxious the first time I phoned a member of cabinet. It was two weeks ago, when I called Canadian Minister of Public Safety Ralph Goodale to oppose Bill C-71. Turns out it was a piece of cake. Here’s how it went.

My nervousness before the call surprised me.

My career has required me to ask top corporate and government executives some hard questions, sometimes in front of hundreds of people. I’ve often called strangers for my job and as a volunteer. I’ve spoken with many elected officials and their staff, mainly during my run for office in the last Ontario election. But I still had the jitters before this call.

I had written a couple letters to my MP, a Liberal. The first was an e-mail to oppose Parliamentary Motion 103 last year. The second was a form letter against Bill C-71 through OneClearVoice.ca three weeks ago.

But I had never made a personal phone call to oppose something they stood for.

My Q&A with Conservative MP Bob Zimmer about Bill C-71 convinced me to make this call. 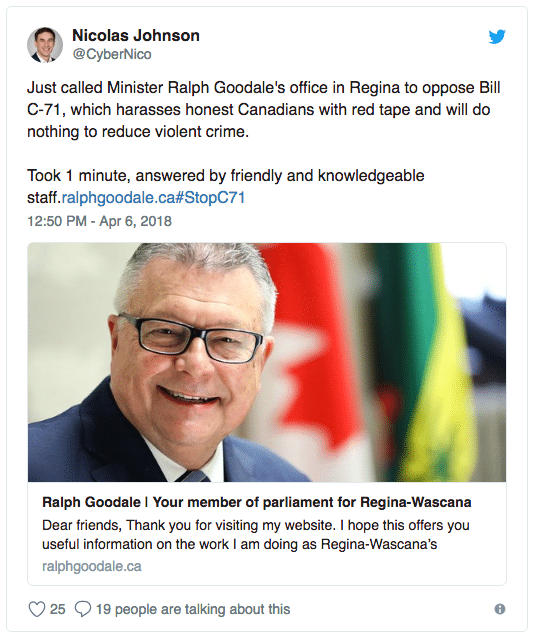 I dialed Goodale’s Regina office, as Zimmer instructed. The phone rang for what seemed like a long time. A man answered and introduced himself. I spoke from the script Zimmer suggested.

“Hello. My name is Nicolas Johnson from Toronto, Ontario. I’m calling to record my opposition to Bill C-71.”

“OK, thank you for the call. What’s your postal code, please?”

“Great, thank you. I’ve noted it. Was there anything else?”

The call could have ended there. Easy. I asked if I should say why I oppose the bill.

I shared two points from my list. The staffer offered enthusiastic and courteous rebuttals. I countered. We thanked each other and said goodbye.

The whole thing lasted about 2 minutes. It could have been done in 20 seconds.

Since then, many people have told me they called and it was easy for them, too. Many simply left a voice message.

(If the mailbox is full, see here for other ideas that take 1-5 minutes.)

I have no idea if these actions will influence the government to stop this unjust and unnecessary legislation, but I am continuing to oppose Bill C-71 through letters, phone calls, petitions, and other means. And I will do my darnedest to support political candidates and parties who support the legitimate use of firearms. 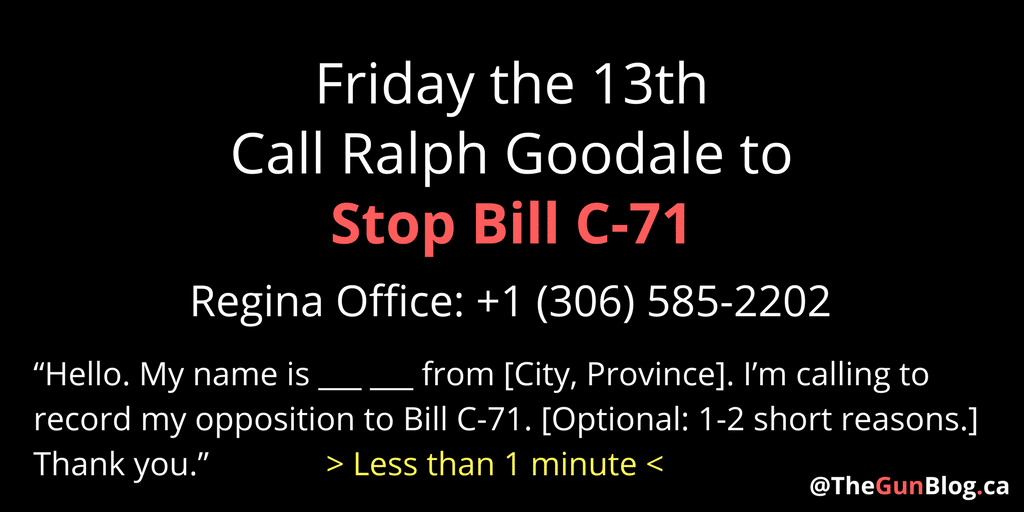 “Thank you TheGunBlog.ca! Having a family and working doesn’t leave much time to oppose the gun grabbers. Little things like the above help a lot by getting right to the point. I called. Mailbox full. Then called again later and left a message. I wouldn’t have thought to do it on my own. Thanks!”

“Called and left message. Ask for a followup!!!”

“I called. Mailbox full. Then called again later and left a message. I wouldn’t have thought to do it on my own. Thanks!”

“I did that. Messages were full.”

“Done. I’m might call a few more times today just to make sure he gets the message…seeing as I’ve never received a single response from any emails or paper mail I’ve sent @RalphGoodale, or any other MP for that matter.”— Sean

“I made the call this morning and left a message.”

“Goodale’s office is not answering the phone and the voicemail is full.” — Hugh