Liberals May Back Down on C-71 If Strong Outcry, MP Zimmer Says

TheGunBlog.ca — The Canadian government may back down from its proposed law to ban more guns and further restrict lawful hunters and sport shooters if enough people voice their disapproval, said Bob Zimmer, an opposition member of parliament.

Some political analysts say the Liberal-led government can easily pass Bill C-71 into law because it controls a majority of the House of Commons and has wide support in the Senate.

But parliamentary committees can request amendments, and the Liberals have scaled back or dropped plans after a strong outcry or lack of support, Zimmer said. Glen Motz, an opposition MP who sits on one of the committees, has said he will propose changes that reflect people’s concerns.

“It’s not a done deal. Be focused on it,” Zimmer told TheGunBlog.ca in a telephone interview on April 4. “This government has backed down before. I’m optimistic that they’ll pull back again.”

See TheGunBlog.ca’s dedicated page on Bill C-71 to see how the bill harasses gun owners and how you can help stop it. 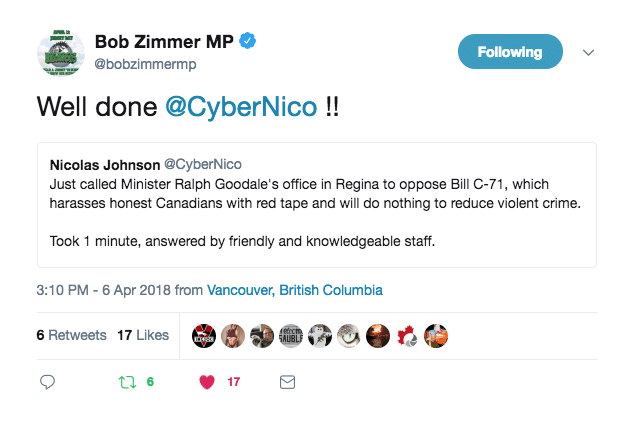 The Conservative member of parliament is based in Prince George, northern British Columbia. Zimmer is Co-Chair of the Parliamentary Outdoor Caucus, which discusses policies related to fishing, hunting, sport shooting and outfitting. He is Chair of the House of Commons Standing Committee on Access to Information, Privacy and Ethics.

Zimmer spoke by telephone on April 4. This interview was edited for clarity.

It has little to do with gangs and guns. I’ve gotten a lot of comments that it does nothing.

I think it does a little bit by expanding background checks. If they catch one guy who they hadn’t caught before, if it catches that one person and prevents them from obtaining a firearm, that’s great.

The Liberals like to talk about how they’re funding police [to tackle violent crime.] But in C-71, there’s nothing. It talks more about lawful firearm owners.

The frontdoor registry is the reference number that is required before a firearm will be allowed to be transferred.

Right now, a person needs to hold a PAL and be able to display it. With C-71, a registrar will be required to approve every purchase or sale. How long is it going to take? Is it a day? Is it 5 minutes? Or is it eight weeks like for a “Restricted” firearm today?

There’s a big bureaucracy that has to be attached to this. Like for the Long-Gun Registry.

How about the backdoor registry?

The backdoor registry is the copy of the Quebec registry, the Quebec data in its entirety. It’s not only a backdoor, it’s straight up, “Here’s the registry, fill your boots up.”

The Information Commissioner made the request to [Former Public Safety Minister Steven] Blaney, with the understanding that Bill Clennett would only get a heavily redacted copy. That’s why it was preserved, and for that alone.

I think it’s in bad taste.

Minister Goodale is now proposing that that copy be made available to the government of Quebec.

Let’s say Joe Smith used to live in Quebec, or bought a firearm from someone in Quebec. That database would have information on someone who is not necessarily a resident of Quebec in its system.

The next obvious request is to update that information. Then you’re asking Canadians to update information on people who aren’t residents of Quebec. How many provinces will be complicit, and how many will say, “None of your business.”

The bottom line is that it could help restart a federal firearm registry in Canada.

A lot of Quebec MPs are upset about this.

It records the transaction. It talks about time and date of the transaction. And it establishes the rubric for another registry. It wouldn’t take too much to add more information to that registry if the government decides that the reference number alone is not enough.

It’s saying that it’s not a registry, but it is a registry. There’s no doubt about that.

What’s wrong with having a registry?

C-71 starts with the premise that this is meant to fight gangs, and it’s not. It’s going after lawful firearm owners.

It’s taking a lot of resources and targeting the wrong group.

I’m a handgun owner, so I’m part of the registry just by the fact that I have handguns.

Should we assume that Bill C-71 will pass?

Once we get back to Ottawa, it will be in committee. I’ve heard some good names of people who will be speaking to committee.

This government has backed down before. I’m optimistic that they’ll pull back again.

The committee is tasked to provide changes to the legislation as brought up by witnesses before committee.

Then there’s a whole other process through the Senate. Three readings and committee before it becomes law.

The Liberals have a majority in the Senate, but my hope is that changes could be made there, too. There’s always hope.

How serious is the Conservative Party about courting gun owners?

I’m a gun owner. I just think sometimes they get a raw deal.

I know other people in our caucus members who feel the same.

To “court” them as a consistency, that’s not a term I would use.

The Liberals have a lot of challenges. They’re establishing something they promised in the last election to not establish. They’ll have to answer to that.

I don’t like identifying a bloc looking for special treatment. I like to look at what’s practical.

I don’t think of it as being pro-gun or anti. When you have that moral core as a principle yourself, you don’t have to ask why you’re supportive of firearm owners. You just are.

I think the other side seems to be much more manipulative. They’re trading off rural versus urban to get the advantage.

We really believe it. We’re not weighing it on the scale.

Should we consider C-71 as a done deal, and focus our attention beyond C-71?

It’s not a done deal.

Be focused on it. I would say, contact Ralph Goodale’s office in Regina.

We’ve done it before, we got them to back down.

I think the same thing can happen here.

[Like the UN Firearms Marking Regulations that were discussed] quietly on the weekend, it was pulled back.

The pro-firearm community has done it in the past. Maybe we can do it again.

The Firearms Marking Regulations come into force on Dec. 1, and some people think those could kill the firearm industry.

As that date approaches, we should be ramping up again and getting them to back down again.

They’re going to be having enough problems antagonizing lawful firearm owners in Canada.

So opposition can work?

I want to encourage guys out there: This does have an effect.

We put out Ralph Goodale’s phone number, e-mail, at his constituency office.

It’s different in the minister’s office. If you’re the minister, you have thousands of employees to deal with this stuff.

If you’re in a constituency office, like in my case, you have one person.

They should contact the constituency office, not the ministry.

Should people contact their local MP or Minister Goodale?

Make sure you send a letter to Minister Goodale first.

How should we communicate with MPs?

A nicely worded e-mail, one paragraph, nicely said, respectful language … Those kinds of things get read.

A nice phone call too. “I want to record my opposition to C-71.” That’s fine. If you have a couple reasons to add, like, “I don’t support re-establishing a firearm registry,” and your other concerns, that’s good, too. 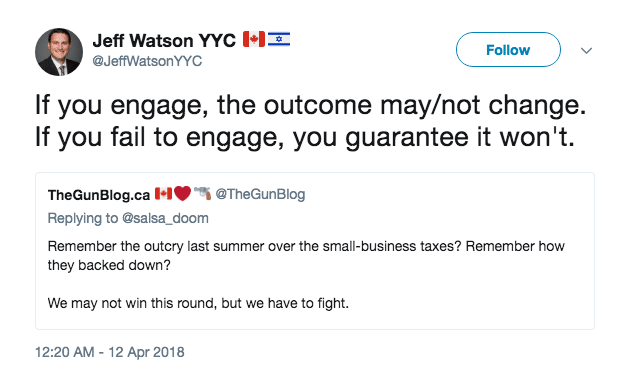