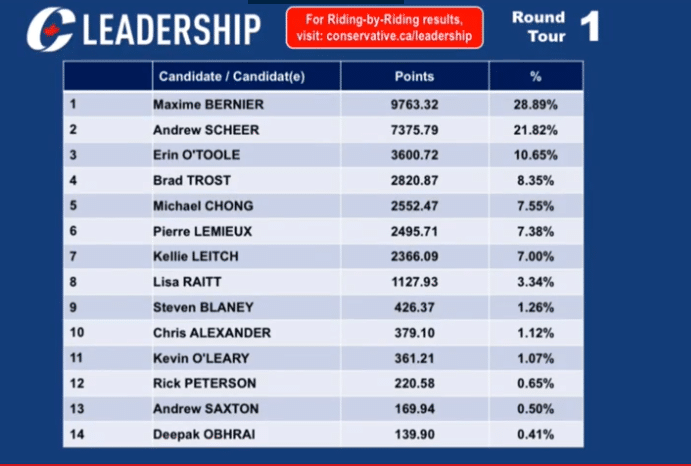 Screenshot of first-round vote for Conservative Party of Canada leader, 27 May 2017. Source: Conservative.ca

Andrew Scheer wasn’t my first choice to lead the Conservative Party of Canada, until party members elected him last night. Now, Scheer is my guy and I want him to be prime minister.

Following are some thoughts on what just happened and what comes next.

Who knows. Several candidates had strong proposals, from Maxime Bernier and Erin O’Toole to Brad Trost and Pierre Lemieux. Maybe others, too. Scheer’s policies show he understands the injustices and flaws in our laws and that he has smart views on what to do and how to do it.

Why are Scheer’s proposals still relevant?

They show his thinking and intentions. Erin O’Toole’s views strengthened as he got more input from more shooters and hunters, and the same could happen to Scheer. They could also remain unchanged, or get diluted. In the run for the party, he had only to appeal to 141,000 eligible voters. In a run for PM, he’ll have to appeal to 29 million.

Why didn’t gun owners participate in this vote?

I guess because we’re normal people: busy, lazy, tired, don’t know, don’t care, don’t value the process, or because we support another party. More than 9 out of 10 gun owners stayed out of this game. (If every one of the 141,000 voters had a gun licence, that’s still more than 93 percent of Canada’s 2 million licensees who didn’t vote.) Then there are the millions of unlicensed shooters and hunters who also stayed out.

Is it sad that Maxime Bernier lost?

For Bernier and his supporters, like me, it was devastating to see the frontrunner lose by a hair after 13 rounds of voting. But it’s done, and almost 80 percent of Conservative voters didn’t get the candidate we wanted. That’s how it goes, and that was yesterday. It was good to see so many strong candidates, and I hope Scheer keeps them close.

Are Conservatives necessarily the party of gun owners?

No. Some Conservative governments, like that of Brian Mulroney and his Minister of Justice Kim Campbell in the early 1990s (see here and here), are outright hostile to us. And while Stephen Harper scrapped the so-called Long-Gun Registry, eliminating a useless and wasteful gun policy, something no other major democracy has achieved, he broke his pledge to repeal the Firearms Act.

I support the Conservatives because they’re the best (or the least-bad) party for me (on guns and other issues) among the options, with the highest chance of victory. I ran as a candidate for the Progressive Conservatives in Ontario a few years ago, and have volunteered on several campaigns. But I can live with non-Conservatives. (I share a bed with one, and keep hoping she’ll see the light one day.)

Should gun owners vote based only on firearm policies?

Yes. He won’t win on hair, socks or yoga poses. He will win by being Andrew Scheer. His ideas, style, eloquence, personality and experience contribute to his appeal in parliament and among Conservative party members. I’m confident he’ll appeal to millions of Canadians.

He won the Conservative election as the first pick of 21.8 percent of voters, and then gaining support as the No. 2 and No. 3 choices, maybe all the way to No. 10. Some say he was the least-polarizing, least-divisive or least-offensive candidate, the one with the least baggage, the one everyone could live with. (Calibre magazine analyzed the candidates, campaigns and what to expect from Scheer here and here.)

He’ll have to adapt his campaign strategy and tactics for the general election, but he just proved that he’s a winner. I’m looking forward to Andrew Scheer as prime minister in 2019.

Update 20 Feb. 2020: Updates “Are Conservatives necessarily the party of gun owners?” to refer to government of Brian Mulroney and Minister of Justice Kim Campbell.