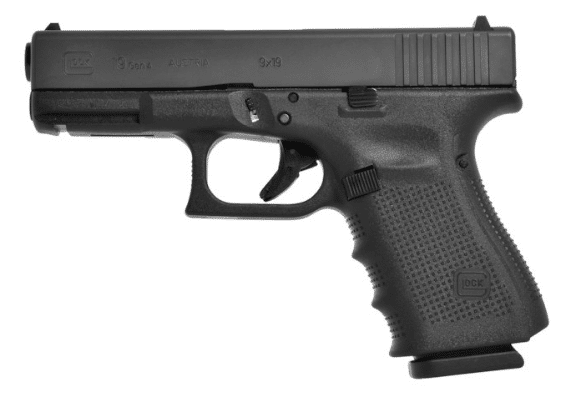 TheGunBlog.ca — Glock GmbH, the world’s biggest handgun maker, said Canada’s airplane police picked the Glock 19 as their duty pistol a few years ago, after some of the world’s most-rigorous testing.

The round count makes it one of the most-severe short-term handgun trials.

Many pistols have a service life expected at 5,000 or 10,000 rounds before requiring new parts. At least one report shows a Glock 17, the G19’s bigger parent, continuing to fire reliably after 250,000 shots.

The Glock 19 is the world’s most-popular handgun.

The 9 mm pistol is a favourite of plinkers, competitors, police, military and civilians for personal protection.

The RCMP adopted the GLOCK 19 Gen4 several years ago for its Air Marshal program after extensive testing. That testing involved the firing of 30,000 rounds in each of five sample pistols.

The Ottawa-based RCMP, Canada’s largest police agency, declined to comment on the trials or even confirm they occurred, according to Caroline Duval, a police spokeswoman responding yesterday to questions about the tests from TheGunBlog.ca.

The Canadian Air Carrier Protective Program contributes to keeping the public safe on aircraft by providing specialized, covert In-Flight Security Officers aboard domestic and international flights. The RCMP does not comment on specific tools or techniques when safety, or the integrity of its operations, may be compromised.

Canada is one of Glock’s largest recurring annual markets outside the U.S.

The company began selling a G19 that’s legal for Canadian sport shooters to own in 2018.

Cassells also provided an update yesterday on new models and when they might be available in Canada.