Coalition for Gun Control Says Handgun Ban ‘Within Our Reach’

TheGunBlog.ca — The Canadian Coalition for Gun Control said in a November fundraising letter that it got politicians to toughen a planned law against hunters and sport shooters, and that the government’s possible handgun ban is “within our reach.”

The letter, published below, outlined plans to further attack the rights of federally licensed shooters by demanding the seizure of their firearms and pushing for more privacy intrusions by police. The fundraising pitch used falsehoods and distortions to seek penalties and punishments for honest men and women, not lawbreakers.

Prime Minister Justin Trudeau is considering a “full ban” on handguns and many rifles and shotguns owned by licensed owners to help him win re-election in October.

He also proposed Bill C-71 as a law to prohibit more guns and make it tougher for Canada’s 2.2 million police-approved shooters to buy, sell, own and transport firearms. It will probably become law this year.

“The time has come to ban handguns and military assault weapons in Canada,” said the letter dated Nov. 12, the day before the coalition kicked of its flashiest campaign to eliminate gun ownership. “We managed to get some amendments to Bill C-71. And have brought a ban on handguns and assault weapons within our reach.”

Hunting is at the heart of Canadian heritage, and target shooting is one of the country’s most-popular and safest sports. In addition to a record-high number of gun-permit holders, millions of unlicensed family and friends shoot safely and responsibly under their supervision.

Excellent work bringing this lie-soaked misrepresentation of the facts to light. Ms. Cukier obviously has no shame. I counted 9 misrepresentations and outright lies, only counting the most egregious ones. Hopefully the MSM will pick this up for even more exposure.

A PDF of the fundraising letter was sent to TheGunBlog.ca by a recipient. We removed their personal information and are publishing a transcript and the image with their permission. Update Jan. 13: A colour copy of the letter from the website of the Trauma Association of Canada is included below.

TheGunBlog.ca didn’t receive a reply from the coalition today after e-mailing them to verify the letter’s authenticity.

Senator Don Plett, who delivered a devastating critique of Bill C-71 last month, published the following on Jan. 4 (reprinted at TheGunBlog.ca): 14 Things You Should Know About Violent Crime and Firearms in Canada.

OneClearVoice.ca has charts and other tools. Gary Mauser has published many statistical analyses at Justice for Gun Owners.

We are calling on you, and other Canadians, who believe that decisive action is needed [to] stem the surge of gun violence rising in our country. We are saddened the issue continues to go unchecked, yet hopeful we can make real change. We have a small window of opportunity: most Canadians now want a complete ban on handguns. And the Federal government is deciding what to do.

But we need your help. Right now, you can be part of the change by signing our petition at triggerchange.ca. Please join the movement and encourage your friends and colleagues to do the same.

There are now nearly one million handguns legally owned in Canada, which is more than double the number from 10 years ago. When the number of legally owned guns increases, so do the risks that they will be misused, stolen or illegally sold. For the first time in thirty years more than half of crime guns traced in Toronto were owned by Canadians as opposed to being smuggled in from the US. This phenomenon has been documented across Canada.

We need action now. We are approaching the tipping point, from which there is no return. In 2004, there were 384,000 restricted weapons, primarily handguns. Today there are more than 900,000. In another ten years there will be almost 2 million. Unless we take action.

After years of erosion, we have gaping holes in our gun laws and predictably, we are paying the price. What is so tragic is that this was entirely predictable and preventable. Gun homicides, domestic violence and even suicide have increased year by year.

Over the past two years, we have been working hard to drive for change in our gun laws. We managed to get some amendments to Bill C-71. And have brought a ban on handguns and assault weapons within our reach. But we need your support.

You can help us continue to be an effective voice on the issue of gun violence by donating to the Coalition for Gun Control. Please send us your contribution or donate online at guncontrol.ca/ donate-now/.

Right now, you can be part of the change by signing our petition at triggerchange.ca.

Time is of the essence. Minister of Border Security and Organized Crime Reduction Chief, Bill Blair, and the Liberal government are conducting a national consultation on a handgun ban. Since a majority of Canadians support this issue, isn’t it time to push their decision making into a real act of legislation?

By signing this petition you are holding our government accountable and ensuring this consultation leads to real action — real action that will make our communities safer. You are standing up to the vocal minority of gun lobbyists and special interest groups who block any gun reform. You are making a difference. You will be heard.

You can help us continue to be an effective voice on the issue of gun violence by donating to the Coalition for Gun Control. Please send us your contribution or donate online at guncontrol.ca/donate-now/.

The Coalition for Gun Control relies on your generous donations and support to continue to be an effective citizen-funded voice on the issue of gun violence. Please also take time to make a donation to help us continue our important work. Please make a special gift to help with our work or become a monthly donor. Your gift will guarantee we have the resources needed to work hard to stem the proliferation of guns and save lives.

The Coalition for Gun Control relies on your generous donations and support to continue to be an effective citizen-funded voice on the issue of gun violence. We need you more than ever. We need action.

Your voice is ammunition to trigger change in Canada.

Wendy Cukier
President of the Coalition for Gun Control 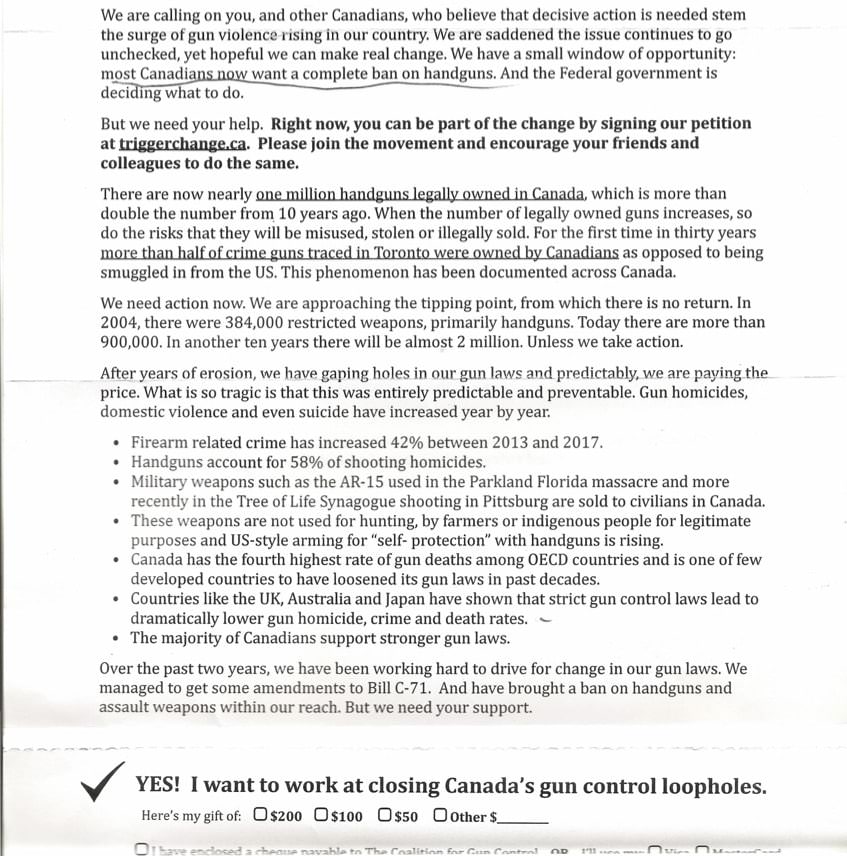 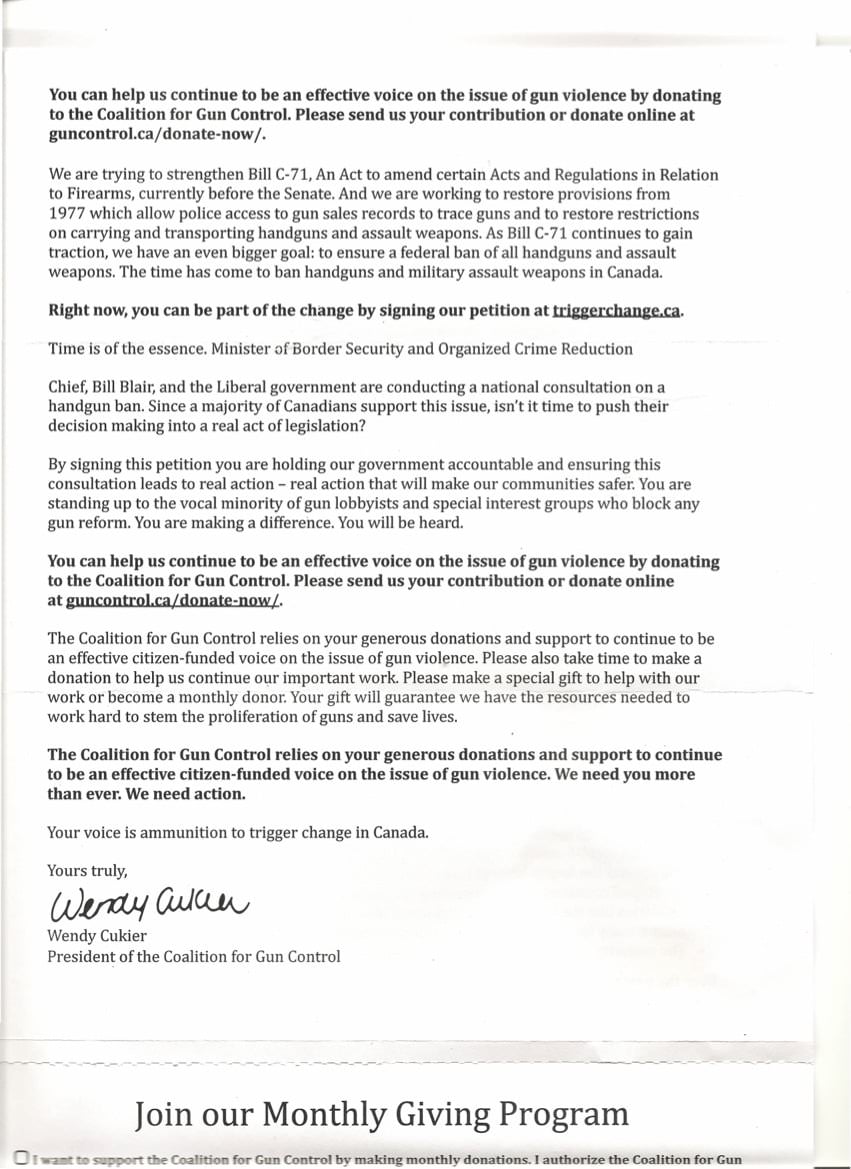 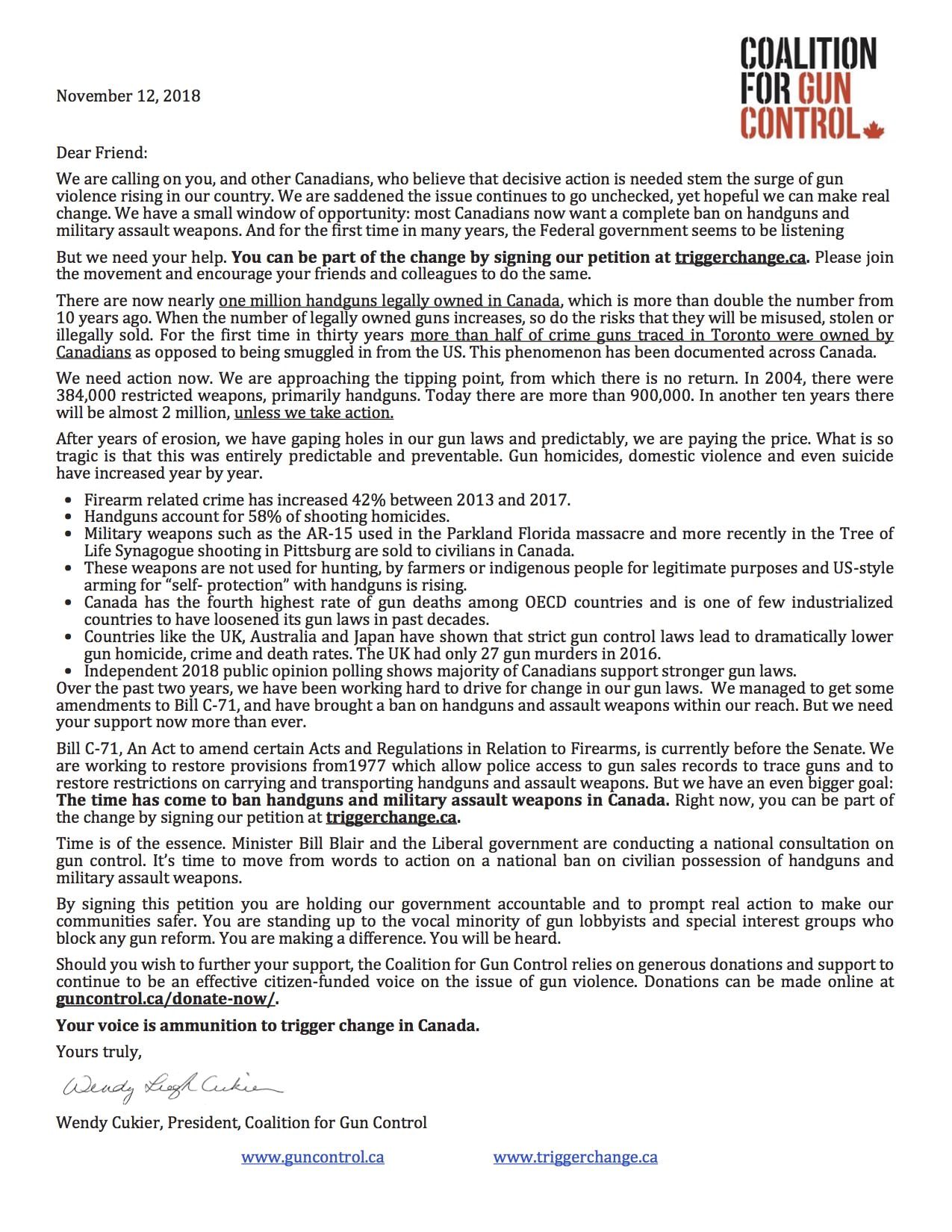 Media That Picked Up This Article