14 Stats You Should Know About Guns and Crime: Senator Don Plett

TheGunBlog.ca — Canadian Senator Don Plett, a leading defender of hunters, farmers and sport shooters, published the following facts and statistics about firearms and crime on Jan. 4 on his website, DonPlett.ca. The article is reprinted here with permission. 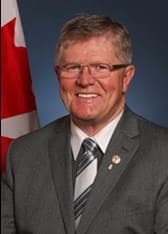 Plett delivered a devastating critique of Bill C-71, the government’s planned law against lawful gun owners. He is a former president of the Conservative Party of Canada and “remains the longest-serving president of a conservative party in Canadian history,” his website says. The Manitoban has served as president of the chamber of commerce, and has played and coached hockey, basketball and golf. He was named to the Senate in August 2009 under Conservative Prime Minister Stephen Harper.

Here's 14 things you should know about violent crime and firearms in Canada:https://t.co/IsSWcvI8Ww #cdnpoli #BillC71 #guncontrol pic.twitter.com/Q5DlZZF1yp

By Senator Don Plett
Reprinted from DonPlett.ca with permission.

The debate over the regulation of firearms in Canada is often influenced more by emotion than by facts. Since good public policy should be based on solid evidence, following are a few facts for consideration:

1. Violent crime is decreasing in Canada.

The number of people charged in violent criminal code violations has decreased by about 25% over the last 20 years – from almost 700 per 100,000 persons to just over 500.

As reported by Statistics Canada, “Despite year‑to‑year fluctuations of Canadian homicide statistics, the rate of homicide in Canada has generally been decreasing over the years.” Homicides in Canada peaked in 1975 and have been trending downward ever since. In fact, since 1975, the homicide rate in Canada has dropped by almost half.

3. The use of firearms in homicides is trending downward.

The use of firearms in homicides has been trending downward since 1974. There was a 20% increase between 2013 (the lowest rate of fatal shootings ever recorded) and 2016, which according to Statistics Canada, “…was driven by a substantive increase in gang-related homicides over that period.” In spite of this increase, the long term trend continues to point downwards.

4. Knives are used more often than guns in homicides.

5. Guns are rarely used in the commission of violent crimes in Canada.

6. Increased gang activity has substantially contributed to the homicide rate in recent years.

7. One in four homicide victims in 2016 had links to organized crime or a street gang.

8. Most gun crimes are not committed with legally-owned firearms.

According to the federal government, “The vast majority of owners of handguns and of other firearms in Canada lawfully abide by requirements, and most gun crimes are not committed with legally-owned firearms.”

9. Handguns have been registered in Canada since 1934.

Not many people appear to be aware of this fact, but it’s true: Handguns are already restricted weapons and have been registered in Canada since 1934. In spite of this, handguns are more commonly used in homicides than long guns.

10. The number of people being charged for breaking the Firearms Act is minuscule.

In 2017, the rate of persons being charged for breaking the Firearms Act was .22 per 100,000 persons or 2.2 per million persons. This rate is the lowest it has been since 2001 and has been trending downwards for over 15 years.

This fact is noted on the website of Public Safety Canada, “In all cases the data does not conclusively demonstrate that these handgun or assault weapon bans have led to reductions in gun violence… “. According to gun control experts, “No methodologically sound studies exist supporting the effectiveness of general firearms laws.”

12. There is no association between an increase in gun ownership and the homicide rate.

Despite concerns to the contrary, research shows that increased legal gun ownership does not result in an increase in homicide.

13. There is no correlation between levels of gun ownership and suicide rates.

14. Background checks under the Firearms Act have had no impact on homicide or spousal homicide rates.

In his brief to the House of Commons Committee on Public Safety and National Security, Dr. Caillin Langmann noted that background checks on individuals applying for a firearm license have had no impact on homicide and spousal homicide rates where firearms were involved.