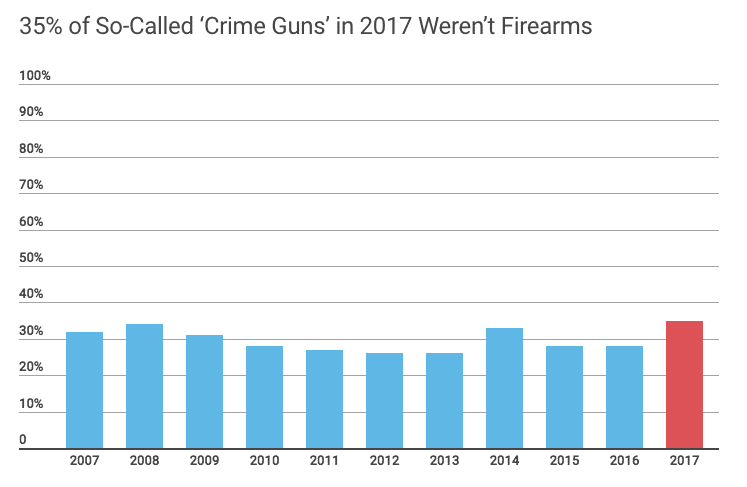 TheGunBlog.ca — More than a third of the so-called “crime guns” seized by Toronto police last year weren’t firearms, and many were never used in a crime, according to an analysis of police data obtained by Dennis Young, fuelling new concern about the reliability of statistics.

The data show 469, or 65 percent, of the 726 “crime guns” seized by Toronto police in 2017 were counted among the three classes of firearms in the Firearms Act: “Non-restricted,” “Restricted” or “Prohibited.” That leaves 35 percent that weren’t firearms regulated by the Firearms Act.

Young, a researcher and gun-rights advocate, obtained the information from the Toronto Police Service through a special request to access internal reports. He published it Aug. 30 on his website.

Police use their best judgment when investigating and reporting on complex crimes with imperfect information. But counting non-firearms and non-crimes as “crime guns” makes the data unreliable and undermines trust in police records.

It also risks misleading politicians, policymakers and the public if they mistakenly believe “crime guns” are firearms used in crime. 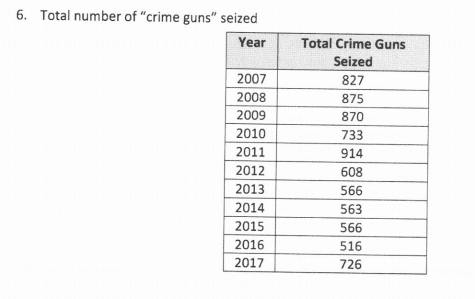 Compounding the imprecise terminology is when statistics are deliberately twisted.

Last month TheGunBlog.ca reviewed a smaller data series provided by the police. The analysis found the percentage of Toronto “crime guns” traced to Canada fell for a second straight year in 2017 to the lowest level in at least four years, contrasting with claims that outlaws are getting more of their firearms from domestic sources.

More than 2 million Canadian men and women have a firearm licence, exceeding the number who play hockey. Millions of others of all ages also enjoy hunting and sport shooting to develop skills, build relationships and provide food. They pump billions of dollars each year into the economy.

A separate and small group of individuals and gangs use firearms for bad. Statistics Canada has said that “gun crime” represents less than 0.5 percent of all crime. Those stats are also boosted by including non-firearms and non-crimes.

The documents obtained by Young show how the police define “crime gun”:

Not only do the police count non-firearms as guns, they also count non-crime as crime.

“Toronto Police inflate ‘crime gun’ stats,” Rick Hemmingson, a lawyer in Alberta, said Sept. 1 on Facebook. “This includes firearms that were never, ever used in a crime.”

If you value news you won’t find anywhere else, please support our journalism.

The police held a press conference on Aug. 2 showing some of the 25 firearms seized in an investigation of illegal drug sellers. One firearm was on top of a pile of drugs at one location, but more than a dozen others were stored legally. Watch the video.

Reporter: Do you have any reason to believe that any of the firearms here were used in a crime?