Manitoba Radio Station Ready to Use Lethal Force Against Threats 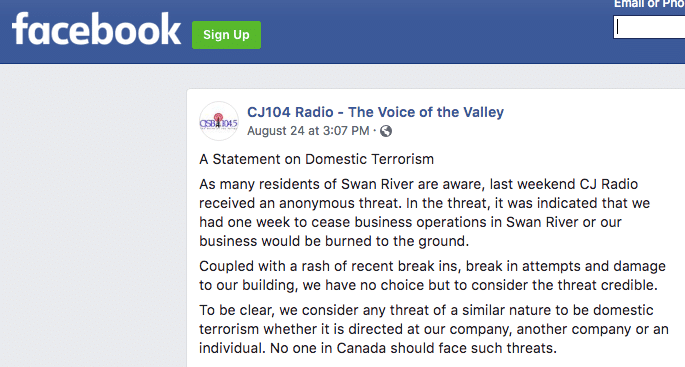 TheGunBlog.ca — A Manitoba radio station told staff to be ready to protect their lives with lethal force after facing threats and a series of break-ins, and after police were late or absent responding to calls for help. The owner said his wife and children have left town.

CJ104 Radio in Swan River, a town of some 4,000 people about 480 km northwest of Winnipeg, has begun patrols by people holding a firearm licence although they aren’t necessarily armed, said Bill Gade, the owner.

“Our message is: Whatever force you use against us, we’ll use that much and maybe slightly more than that,” Gade told TheGunBlog.ca today by telephone. “We don’t intend to drive around shooting people.”

Staff “have been instructed to use lethal means of ending your threat,” the country-music station said in a Facebook article on Aug. 24 and reprinted below. The post is titled “A Statement on Domestic Terrorism.”

“We looked at the Criminal Code and how far we could go, what we could say,” Gade said today by phone.

Police generally instruct residents worried about their safety to remain unarmed, to obey attackers and call 9-1-1 in an emergency. Many attackers and robbers count on their targets being defenceless.

We have very incomplete info on this case, so best to avoid judging who’s right/wrong or suggesting how it should be solved.

It’s important to have the “legal” right to use force to defend oneself from unjustified threats/attacks. I think Canada has that.

On the first break-in at CJ104, a masked person cut the phone, electricity and Internet lines at the back of the station while other people broke windows out front on the street, Gade said. Then about 10 days ago an unidentified person said they would burn down the station if it didn’t stop broadcasting, he said.

“No one has ever seen anything like that in Swan River,” Gade said. “We haven’t been able to identify anything that might have triggered this.”

Gade cited evidence from surveillance cameras and neighbours who saw the perpetrators.

Gade said by phone today he was referring to a person with a firearm Possession and Acquisition Licence (PAL), not an Authorization To Carry (ATC).

More than 2 million Canadian men and women have a PAL that allows hunters and sport shooters to transport unloaded firearms. An ATC is a rare, hard-to-obtain permit that allows the holder to carry a loaded firearm on their person for protection.

Read: More Than 90,000 Canadians Are Allowed to Carry Guns Every Day

The Swan River detachment of the Royal Canadian Mounted Police asked that Gade’s patrols not have firearms in the vehicles, he said. He passed on that request, he said.

On the first break-in, the RCMP took about 50 minutes to arrive, Gade said. Even though the police station is about six blocks from the radio station, it isn’t staffed 24 hours. Officers need to get up, get dressed, get a car and get a partner before they can respond to a call, Gade said. If they are responding to another call, they could be a couple hours away.

After another break-in attempt, the police refused to come out, he said. Then last Friday after Gade wrote on Facebook how he planned to deal with the threats, police came.

They slid notes under the door and left voicemails, he said.

The RCMP and Mayor Glen McKenzie didn’t respond to e-mails and voicemails from TheGunBlog.ca seeking comment today after business hours.

The police said in a statement to 680 CJOB “that promoting this type of armed vigilante activity is not acceptable,” Global News reported yesterday. (Reprinted below.)

“I know they have concerns, and maybe they’re frustrated that maybe things aren’t moving as fast as they would like, but the RCMP are the professionals, and they’re trained to deal with these kinds of things,” the mayor was quoted as telling CBC News on Aug. 25. “So I’d say let them do their jobs.”

Gade said he was back at the police station for 2 hours this morning. He has changed wardrobe to avoid recognition, and his wife and children have left town.

A Statement on Domestic Terrorism

As many residents of Swan River are aware, last weekend CJ Radio received an anonymous threat. In the threat, it was indicated that we had one week to cease business operations in Swan River or our business would be burned to the ground.

Coupled with a rash of recent break ins, break in attempts and damage to our building, we have no choice but to consider the threat credible.

To be clear, we consider any threat of a similar nature to be domestic terrorism whether it is directed at our company, another company or an individual. No one in Canada should face such threats.

Over the past few weeks staff from CJ Radio and 83 North have been providing patrols throughout the downtown area of Swan River. During that time, we have identified numerous safety issues and found several suspicious persons at large. There are no doubt some great reasons to be “on the town” at 3 a.m. — but we along with most would expect people with good reasons for being out to not hide in bushes, wear face masks in summer or make other attempts to hide their identity.

We appreciate the many of you who recognize us on patrol and wave or say hi. We hope that at least some citizens and businesses in the downtown area have felt safer knowing someone else is watching and monitoring.

Over the past few nights, many concerned citizens have called police when they have seen suspicious persons. We along with the RCMP appreciate those calls and encourage you to keep making them ANYTIME you see something that you question. As taxpayers, we spend over a million dollars a year for police protection for JUST the town area. Your gut instinct is usually correct — if something feels wrong, it probably is and it is worth the time to have someone check it out. Your call could easily be the missing piece into solving the out of control crime issue in Swan River.

As angry as we are with the people who have made threats against our business, and those who have broken in or tried to break in … we understand that those actions don’t equate just cause for a life to be lost.

In the past few days a couple incidents have called into question the personal safety of our staff who have been patrolling or providing overnight occupancy at our offices. At this time, Swan River RCMP are simply unable to provide a level of protection that is consistent with unarmed patrols being able to receive assistance when needed. We are simply unwilling to place the safety of unarmed staff at the level of risk currently presented by the lack of police presence in Swan River.

First, we are instituting substantial changes to our patrol schedules and methods. Those changes are effective immediately. Do not assume that someone you see at night is our staff patrolling. Our staff will ONLY be traveling in well marked vehicles — you will immediately know if what you see is related to our patrols. If you see something that is not marked as CJ Radio or the RCMP, you should report it to police.

Second, we have made the decision that any patrols or overnight occupancy efforts will include at least one member who is licensed to carry firearms. This is not a decision we take lightly. We assure you that any such efforts will be within the scope of the appropriate firearms laws.

The deadline for us to cease operations in Swan River expires this weekend. As you may have deduced, we will be doing no such thing.

Should you see a fire at our offices, please call 911.

Should you be the person or persons responsible for the threats, break ins, damage and attempts — please consider this statement fair warning. We consider your death to be a direct consequence of your choice to be a criminal. We have instructed all of our staff to defend themselves using non-lethal methods where possible. Should you take actions that cause them to fear for their lives, they have been instructed to use lethal means of ending your threat. We regret that because of you, our town is not currently considered safe. Please move to another town, we and the entire area have had enough of you.

We feel compelled by the number of people who seem to misunderstand this post to clarify something. This post deals with our current issue and is unique to our issue. Certainly there is no portion of it that compels others to use force to defend themselves — it clearly asks that others call police. Prior to anyone in Canada assuming they are protected as “self-defense” you should at a minimum consult the Criminal Code of Canada. It contains a wealth of information about when to use non-lethal force, the amount of force allowed, as well as details on when you can legally use lethal force. As our situation is no doubt different then the situation of those reading this post, please apply the law to your own situation instead of assuming the application to our situation matches yours. If you are in doubt of what the Criminal Code says, you should consult a lawyer. As per the Criminal Code, the portion of the post that deals with our staff fearing for their lives deals with the genuine fear and provocation referred to in the Criminal Code. The portion that deals with our staff being told to use non-lethal force when possible deals with the concept of appropriate force to defend and stop an attack on their person. None of our staff consider that merely breaking a window and entering our building is justification for lethal force.

The Swan River RCMP became aware of the post on the evening of August 24, 2018, and immediately contacted the person responsible to explain that promoting this type of armed vigilante activity is not acceptable. Further, he was advised that anyone engaging in such an activity will be stopped by the RCMP as it is a clear risk to public safety. We continue to monitor and engage in discussion with the person who made the post. The Swan River RCMP will respond to all calls that require police assistance. The RCMP will also follow-up on all complaints and carry-out comprehensive investigations as required. Public safety is our priority and Swan River residents can be assured that our officers, who also live in the community, are committed to providing the best policing services possible.