TheGunBlog.ca — The mayor of Toronto, John Tory, wants to confiscate lawfully owned guns from 2 million hunters and sport shooters across Canada. Four years ago he said promising a ban was an “empty gesture.” In 2007 he said prohibitions were a case of “mistaken priorities.”

The mayor led Toronto City Council in a series of landslide votes three weeks ago urging the federal government to confiscate all handguns and all semi-automatic rifles and shotguns from all federally licensed firearm owners in Canada.

Tory’s harassment of honest citizens marks a U-turn for the former conservative. He criticized the socialist Olivia Chow in the 2014 mayoral race after she promised to take away guns from their rightful owners if elected.

The mayor is now campaigning for re-election in October against candidates including Jennifer Keesmaat, who also wants to ban firearms from honest people, and Faith Goldy, a shooter who is dedicating part of her campaign to defending gun owners.

“Handguns are already strictly regulated by the federal government,” Tory said in a statement dated July 14, 2014, and shared yesterday on Twitter by Jonathan Goldsbie. “What Ms. Chow doesn’t seem to understand is that criminals and gang members don’t obey the law. Calling for such a ban isn’t leadership. It’s an empty gesture.” 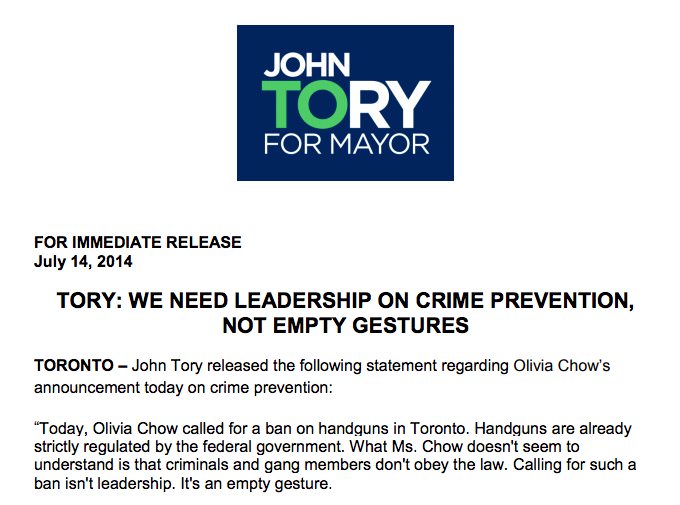 More from Tory as quoted in the Toronto Star on Aug. 4, 2007, when he was leader of the Ontario Progressive Conservative Party:

“When … people say have a handgun ban it’s a case of mistaken priorities and a kind of solution that will superficially make people perhaps feel better but won’t really address the issue.”

It's difficult for me politically + personally.

As a fellow conservative, he was encouraging when I ran for the Ontario legislature. We weren't buddies, but crossed paths at political events.

Past few weeks have been tough for me.