Hitler Buys a Gun in Canada: Funny Video Should Be Mandatory 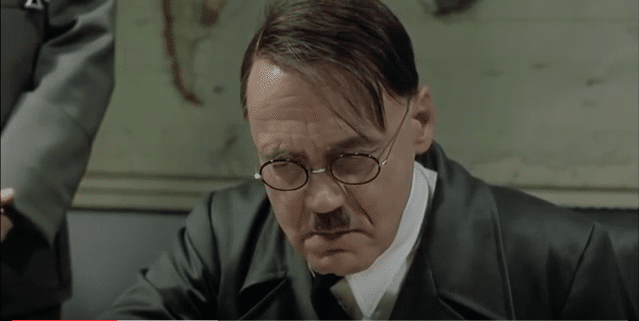 “Hitler Reacts to Buying a Gun in Canada,” Source: Antonio Cangiano via YouTube

This could be the funniest video in Canadian firearms history. If you watch only one video today, make it this one.

It illustrates our country’s gun laws using the scene of Adolf Hitler going hysterical in his bunker in the movie Downfall. It’s the ultimate meme of how our laws work and why they don’t, and it’s hilarious because it’s disturbingly accurate. (You’ll forgive the reference to the previous system of ATTs, Authorizations To Transport.)

(You might need to turn on subtitles/closed captions by clicking on the “CC” button along the bottom-right of the video frame. Thank you A.J. for the tip. Sorry you didn’t find the clip funny.)

The 4-minute YouTube video, “Hitler reacts to buying a handgun in Canada,” was published by Antonio Cangiano, a software developer in Penticton, British Columbia. It came out in April 2015 and has 16,150 views. (The view count doesn’t update in real time.)

It should have millions.

If you know anyone in those fields, forward it to them and share the laughter. If they don’t at least smile, then run, hide and pray.

Now lean back, and press Play.