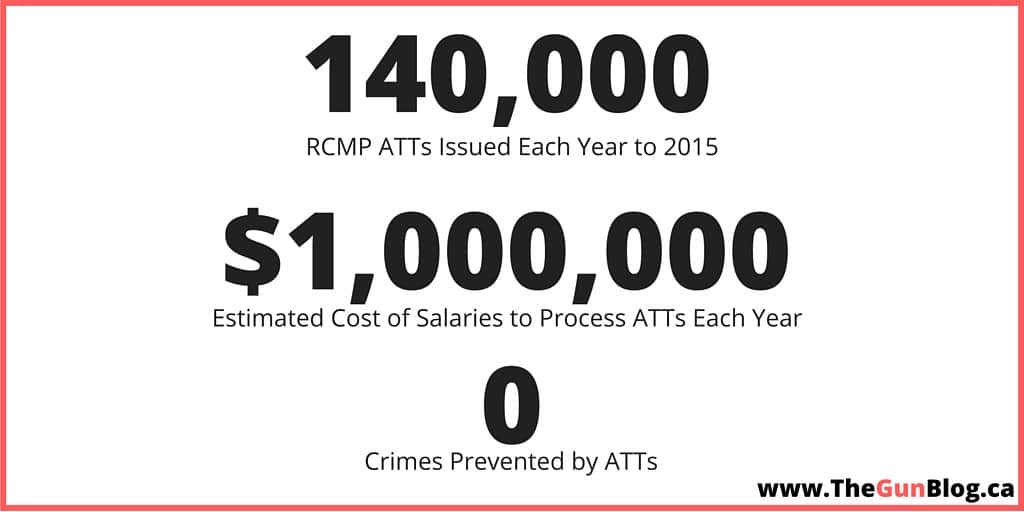 The RCMP used to issue about 140,000 Authorizations To Transport (ATT) firearms each year to civilians who asked for permission to take their guns from the store to home, or from home to the target range, the gunsmith or the airport.

Most of them were for target practice and sports shooting, the RCMP said in a notice in the Canada Gazette dated Aug. 12, 2015. ATTs could be valid for as long as five years.

Civilians who want to own guns legally in Canada have to pass a test and background check to obtain an RCMP-issued licence, and there are different licences and different rules for owning and transporting different types of firearms. Until a new law took effect last September, every licensed individual who wanted to take any legally owned handgun, and certain rifles, to the range also had to apply to the RCMP to get authorization to transport those firearms. The law was changed to include the authorization for some licence holders, while others still have to ask for it.

Civilians who use their guns to commit crimes, i.e., criminals, don’t bother with any of this paperwork. They tend to be unlicensed individuals who obtain and transport their guns illegally.

My personal experience with ATTs was excellent, after I accepted the frustration and uselessness of having to request them in the first place. I would e-mail my provincial RCMP office detailing my point of origin, my destination, my date of travel, my reason for travel, and the firearms I wished to take, and would usually get the ATT within an hour. One time I asked to take a pistol to a target match about 50 km from my home, and my request was refused because I wasn’t a member of a shooting club.

Let’s play with numbers. If an average ATT request took 10 minutes to process, 140,000 of them would take 1.4 million minutes, or 23,333 hours, each year, equivalent to full-time work for about 13 people. Based on a junior constable’s annual pay of about $70,000, those ATTs cost almost $1 million in salaries each year. (That leaves out benefits, pensions, office space, computers, electricity, and also ignores the cost of processing ATT requests that were refused.)

That’s a lot of time, energy, effort and money for zero benefit to public safety.