“We would urge all companies to exercise caution,” NSSF said. 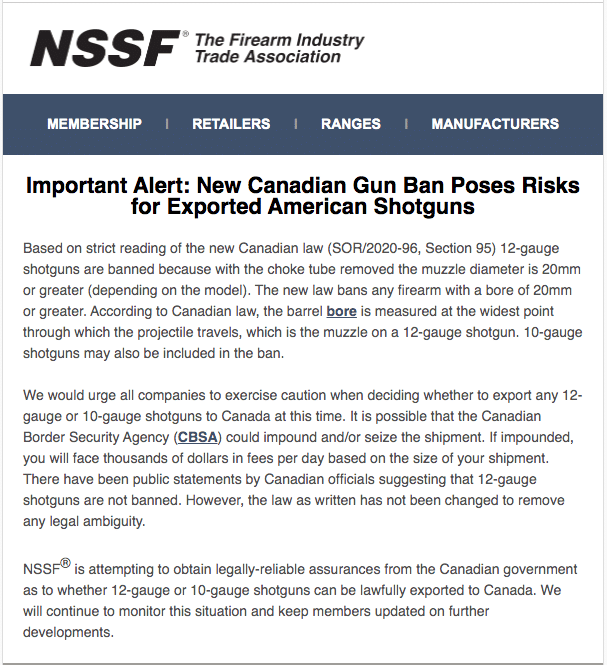 In the middle of business on May 1, Prime Minister Justin Trudeau ordered the immediate criminalization of any company or individual who buys, sells, imports or transports any firearm with a bore diameter of 20 mm or more, plus designated rifles.

“It is possible that the Canadian Border Security Agency (CBSA) could impound and/or seize the shipment,” Newtown, Connecticut-based NSSF said today.

“If impounded, you will face thousands of dollars in fees per day based on the size of your shipment,” the organization said.

The CSSA said the legal opinion was provided by Edward Burlew, their firearm lawyer.

Mossberg, Beretta and other manufacturers with U.S. factories made more than 20% of the 85,000 shotguns Canada imported last year for hunters, farmers, ranchers and sport shooters.

The Liberals said their confiscations apply mostly to the owners of about 1,500 rifle and carbine models, from the AR-10 and AR-15 to U.S. Rifle M14.

The debate over whether or not Canadian shotgun owners are suddenly criminals is a good example of what's wrong with gun laws:

– WRONGHEADED: Have absolutely nothing to do with safety or protection. pic.twitter.com/0tyAcvcU8N

Minister for Confiscation Bill Blair said May 6 on Twitter the CSSA is “absolutely incorrect.”

The CSSA said today that an RCMP Technical Unit Supervisor had confirmed to a gun store that an old Iver Johnson, 12-gauge, single-shot, fixed-choke farm gun with a 2 3/4-inch chamber would be classified as “Prohibited.”

They specifically target the 2.2 million adults and 4,400 businesses with a federal firearm licence authorized by the RCMP.

Canada imports roughly 1,000 rifles, shotguns and handguns every day, mostly from the U.S.

“We would urge all companies to exercise caution when deciding whether to export any 12-gauge or 10-gauge shotguns to Canada at this time,” the NSSF said.

RCMP provide clarification on 10 and 12 gauge classification under the new prohibition https://t.co/eaWhRxHDCv