TheGunBlog.ca — Canadian Prime Minister Justin Trudeau wore a bulletproof vest in response to an unspecified threat of attack at an election-campaign rally yesterday near Toronto, according to media photos and reports citing unnamed sources.

It’s important to protect innocent life. The situation and the response raise questions about tactics, morals, politics and journalism.

Liberal Leader Justin Trudeau wore a bulletproof vest on stage at a Mississauga, Ont., campaign rally last night because of a security threat, according to senior Liberal officials. https://t.co/Fvb8seCosI 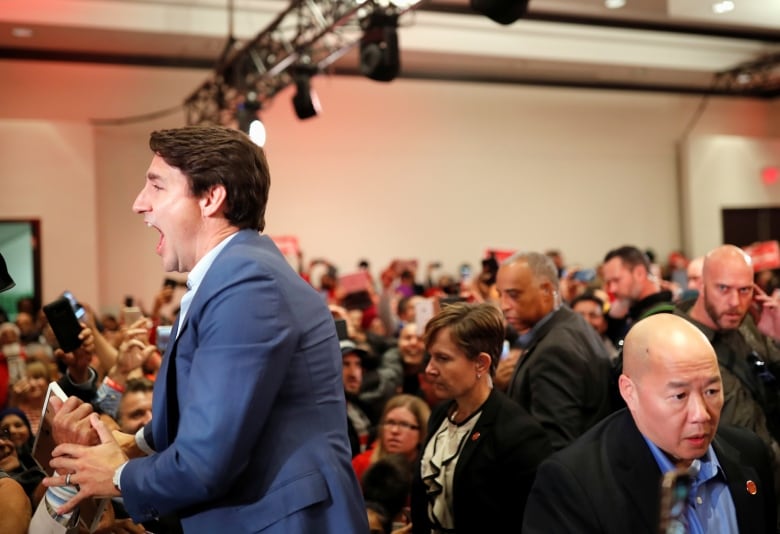 Photo by Stephane Mahe of Reuters published by CBC News on 12 Oct. 2019.

All this whining about TrudeU wearing body armour. It was a stunt. Soft body armour won’t stop a rifle round and his head is clearly exposed. If it was a real threat they would have cancelled to appearance.

TheGunBlog.ca contacted the Ottawa-based Liberal Party and Royal Canadian Mounted Police to ask about the alleged threat and the tactical response.

Trudeau declines to comment on why he protected himself but none of the 2,000 attendees of Mississauga rally. https://t.co/4mO5Iyca1U

There’s nothing wrong with wearing body armour, hiring bodyguards or carrying weapons for safety and protection.

There’s something VERY wrong with having info that an attack is possible/probable and hiding it from the people around you.

I’ve not seen uniformed tactical officers at a rally before and Trudeau never does indoor rallies while wearing a blazer…he was wearing one today. Also, his wife Sophie Grégoire-Trudeau was supposed to introduce him, but she didn’t. #cdnpoli #elxn43

To people who think politicians deserve more protection than non-politicians, a question:

Very upsetting to hear that Justin Trudeau had to wear a bulletproof vest tonight at a campaign event. Threats of violence against political leaders have absolutely no place in our democracy. Thank you to the RCMP for taking these threats seriously and keeping us safe.

Any threat made against @JustinTrudeau, or any leader, is troubling to all of us. No matter how you vote or believe, no one should face threats of violence. To the officers who protect all of us – thank you.

Pretty irresponsible to proceed with the rally and risk the safety of civilians … Who are the doorkickers in green? Whats in the backpacks? Who did the threat-risk assessment and gave this the go ahead? Where was the rest of the "detail"? So many questions … #Theatricks

A protective vest bulges through the shirt of Liberal Leader Justin Trudeau at a campaign rally in Mississauga, Ontario. The rally was delayed for 90 minutes for a security issue, pic.twitter.com/DMwmINagGA