Clement, an independent member of parliament who used to be with the opposition Conservatives, spoke with TheGunBlog.ca by telephone today from Ottawa.

Read the Q&A below.

Confiscation concern spiked to a record after Clement said May 9 Prime Minister Justin Trudeau will announce a “sweeping gun ban” at this week’s Woman Deliver conference in Vancouver alongside Jacinda Ardern, the New Zealand PM.

Trudeau didn’t mention firearm ownership when he spoke to the conference this morning. Ardern wasn’t on the schedule, TheGunBlog.ca reported May 9.

The conference began yesterday and runs until June 6.

“We are looking at all the measures that we believe could help keep Canadians safe,” Bill Blair, Trudeau’s minister exploring mass confiscation, said yesterday to Conservative MP Glen Motz. Motz asked if the government will order bans. 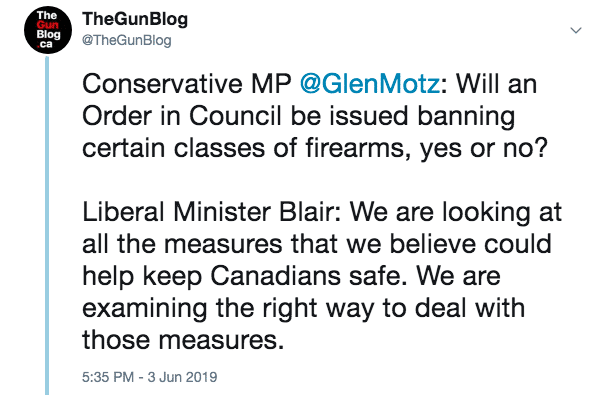 What do you make of the prime minister not mentioning firearms at the conference today?

The way I see it, I had a source who had some information in good faith.

I asked a question in the House of Commons in good faith. They could have answered it. They didn’t answer it. If they changed their mind on the timing, and venue of the announcement, that’s one thing.

The media that Bill Blair did after I asked my question certainly indicates that something is coming down the pipe.

They may have changed their minds on the date, time and place.

By virtue of Bill Blair’s answers, I’m still led to believe something is happening on firearms in the near future.

Do you think your source got things wrong, or they played you, or the plan changed, or something else?

I think the source is a valid source. I think Canadians would respect them if they knew who this person is and where they worked.

Just because they changed their mind, or decided on a different plan, it doesn’t change the direction where I think the government is headed: stricter firearms control without having a debate in parliament about it.

What can you say today about the context and your concerns?

I was entitled to a straight answer and I didn’t get it.

We’re all waiting with bated breath to see when and how policy will be changing with this government.