TheGunBlog.ca — The more things change, the more they stay the same. The editorial in the March 1921 edition of Rod and Gun in Canada shows gun owners face the same challenges today as a century ago.

Dennis Young, a leading advocate for gun owners, published a PDF of the editorial on his website yesterday. Read the full text below. 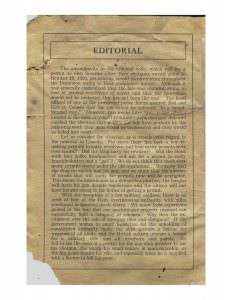 Politicians and policymakers should note a few lessons, as should electors and taxpayers. We have now spent billions of dollars to invent, build and run a complex, convoluted and costly system of firearm licensing, classification and registration. Was it worth it? It’s not too late to stop. Keep the good, dump the rest.

Bill C-71, the federal government’s latest proposal to take away more guns and freedoms from honest people, is another leap in the wrong direction. (Go here to get The Bill C-71 Book as a free PDF.)

The amendments to the criminal code, which call for a permit to own firearms other than shotguns owned prior to October 16, 1920, are causing untold inconvenience throughout the Dominion owing to their prohibitive nature. Although it was generally understood that the law was changed owing to fear of general conditions of unrest and that the sportsman would not be molested, this has not been the case. The head official of one of the provincial police forces assured Rod and Gun in Canada that the law would be enforced “in a broadminded way.” However, two weeks later, three police officers located in the same city went to a long-established gun club and notified the shooters that if they did not have permits by the following week their guns would be confiscated and they would be haled into court.

Let us consider the situation as it stands with regard to the criminal in Canada. For years there has been a law requiring permits to carry revolvers; but how many permits were ever issued? Did the thug carry his revolver? Will the crook walk into police headquarters and ask for a permit to carry knuckle-dusters and a “gat”? We do not think that there were many permits issued under the old regulations. We know that the thug invariably had his gun, and we think that the number of crooks that will apply for permits now will be negligible. This leaves the householder in a defenceless position; the burglar will have his gun despite regulations and the citizen will not have his gun owing to the bother of getting a permit.

With the exception of a few military calibres, there is no need of fear of the Reds overthrowing authority with rifles purchased in sporting-goods stores. We know from experience gained in the war that one machine-gun properly manned can successfully fight a company of riflemen. Why then the excitement over the sale of sporting rifles and shotguns? If the government wishes to enact legislation for the upholding of constituted authority make the alien procure a license for weapons of all kinds, and the British subject procure a license for a military rifle and all revolvers and pistols. We fail to see the need of a permit for the gun-club member to use his shotgun, the youth his small calibre in marksmanship, or the big-game hunter his rifle, and especially when he is supplied with a license to kill big game.