Petition to Stop Bill C-71 Closes as No. 2 E-Petition on Record 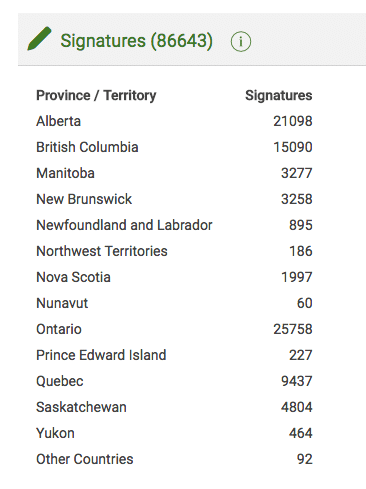 TheGunBlog.ca — An Alberta teenager’s petition to stop Bill C-71 closed today with the second-highest signatures on record for Canadian e-petitions, as gun owners nationwide opposed the draft law to further restrict shooters and ban more of their guns.

E-Petition 1608 ended with 86,643 signatures when it closed at 10:55 a.m. Ottawa time today, according to the preliminary results on the House of Commons website. Ryan Slingerland of Coalhurst, Alberta, started it as a 15-year-old 4 months ago. It was sponsored by his member of parliament, Rachael Harder.

It was the No. 2 petition by signatures since the service began in 2016, and No. 1 for an e-petition related to guns.

The government proposed Bill C-71 in March to prohibit more guns from federally licensed hunters, recreational shooters and competitors, and to make it harder for them to buy, sell, own and transport firearms.

Toronto City Council voted two days ago to ask the federal government to expand the bill and ban civilian ownership of handguns and semi-automatic rifles across Canada.