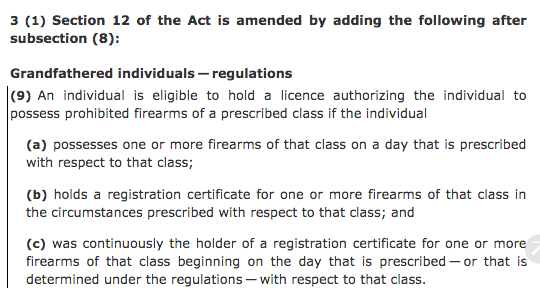 Screenshot of part of Bill C-71.

TheGunBlog.ca — The gun law proposed today by Canada’s Liberal government “is a big warning sign” that more bans are coming, said Ian Runkle, a firearm lawyer. He said the government’s rationale for giving police the power to decide legal classes for guns is “insane.”

Bill C-71, “An Act to amend certain Acts and Regulations in relation to firearms,” proposes changes to the Firearms Act that pave the way for future prohibitions, Edmonton-based Runkle said today on Facebook.

The planned law is the Liberals’ first proposal to limit gun rights since they passed the Firearms Act in 1995.

The bill alters the legal classification of CZ 858 and Swiss Arms rifles to “Prohibited” and adds so-called grandfather clauses allowing current owners to keep using them. But they will eventually be banned since grandfathering can’t be passed on.

In addition to those specific clauses, Runkle said proposed changes to Section 12 of the Firearms Act would create a blanket grandfather clause.

“This is a big warning sign for gun owners,” Runkle said. “This suggests that the current government may intend to prohibit more firearms in future.”

“The people saying, ‘Oh, they’re not banning anything’ are wrong, because there are clear plans laid to ban things,” Runkle said. “There are indications in this bill of planned prohibitions to come.”

“They set up a new framework for grandfathering with future bans,” Runkle said on Reddit. “Why do that if you’re not planning future bans?”

The Liberals also said they will take away the power of parliament to decide a gun’s legal class and give it to the Royal Canadian Mounted Police to eliminate “political influence.”

“The whole, ‘We need to take these decisions out of the hands of politicians’ rhetoric is insane, because of course politicians decide the laws,” Runkle said. “The Liberals just want to ensure a ‘ratchet’ effect, where firearms can move to being more restricted, but cannot easily move back to being less restricted.”

“This is either a lie or a fairly major oversight, because Section 102 of the Firearms Act allows for inspection of a business’s records on fairly broad basis, including copying details,” the lawyer said. “These records will be easily available to the CFO.”

More from Runkle, whose website says he’s a criminal-defence and firearm lawyer as well as a shooter:

“Third, this legislation doesn’t fix any of the legislative disaster that is our firearms laws, and generally makes things worse by making it an even more uneven patchwork of conflicting rules. I have no idea how laypeople are expected to navigate this.”

TheGunBlog.ca asked the RCMP if they were planning more reclassifications:

Do you have plans to reclassify any firearms at the moment?

The RCMP will only make changes to the classification of a firearm in the event that the manufacturing process changes, or new information, brought to the attention of the RCMP, reveals that the firearm meets the definition of a different classification under the Criminal Code.