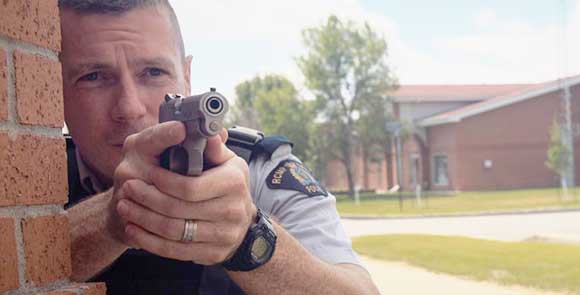 People are often astonished that most police officers aren’t into shooting or guns, don’t train often with firearms and are lousy at marksmanship. But being armed and being skilled with your arm are completely different.

Most cops don’t need to be good shooters because, thankfully, most of them don’t get into situations requiring lethal force. Statistically, most officers won’t unholster their duty weapon during their entire career, let alone point it at someone or fire it. In 2015, Toronto’s roughly 5,500 officers drew their guns 172 times on the beat, and 41 officers fired, according to the service’s annual report.

So why train with a tool you’re unlikely ever to use? Because you never know when you’ll need it to save your life, such as shooting back while under attack to stop the attack.

Shooting schools teach moving with a gun in your hand, and shooting while moving, in their self-defence classes. Some instructors recommend moving or shooting, but not both at the same time.

(TheGunBlog.ca is compiling a list of instructors who teach tactical-oriented skills to private individuals in Canada. If you know any, please share.)

The Royal Canadian Mounted Police began training officers to shoot while moving in April 2016, the RCMP Gazette magazine reported in January, in an article tweeted yesterday by the RCMP.

They made the change after investigating a June 2014 shooting in Moncton, New Brunswick, where a man shot three officers dead and wounded two others. The review concluded that the national police needed training and equipment to respond to such attacks.

“We needed to improve and modernize what we were doing with our firearms,” Sergeant Steve Burke, from the RCMP’s National Use of Force section, was quoted as telling the Gazette. “The crimes are changing and we need to change to adapt to those.”

Until last year, officers had a four-hour Annual Firearms Qualification, where a stationary officer fired at a stationary target at a fixed distance, the Gazette said. That was it, a half-day at the range once a year. Now, after a one-hour test, officers get three hours of training, including shooting while moving, the magazine said.

“It was kind of exciting to not just be standing on the firing line, but actually moving and shooting at the same time,” Staff Sergeant Sheila White, an officer from Merritt, British Columbia, told the magazine. “This was something we haven’t done before.”