Getting It Right: It’s Not a Browning ‘Hi-Power’ or ‘High Power’ 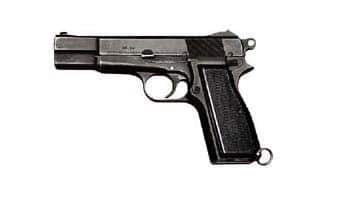 (Update 05 Jan. 2021: Browning’s website began using a hyphen consistently in “Hi-Power” some time after we published this article. The Internet Archive provides a snapshot of the webpage when we wrote it.)

TheGunBlog.ca — One of the world’s most-popular pistols is based on a design by John Browning of the U.S. and was completed by Dieudonné Saive at Fabrique Nationale in Belgium.

What is the name of that 9 mm handgun? Many of us get it wrong, and TheGunBlog.ca wants to help us get it right.

So which one is it?

Wikipedia's headline incorrectly calls the Browning Hi Power the “Hi-Power,” with a hyphen.

Canadians have a particular interest — maybe even a duty — to get it right, since the 9 mm pistol has been our standard-issue military handgun for some 70 years and will remain so for at least another decade. Some models of the gun were built by John Inglis & Co. in Toronto during World War II.

So there it is. It’s either a Browning Hi Power or an FN High Power.