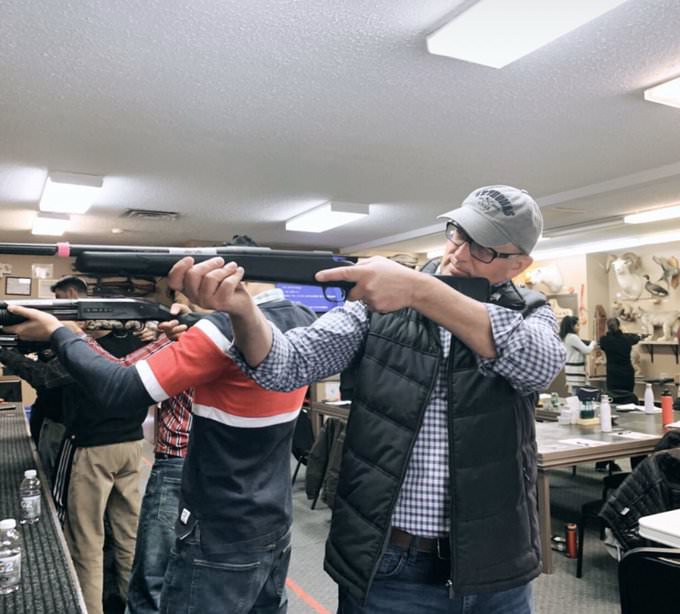 TheGunBlog.ca — Canadian Member of Parliament Tako van Popta attracted a surge of online fans after sharing photos of himself taking the mandatory safety course for a federal gun licence.

“This is great!” Allan Harding, a three-time national pistol champion, replied on Twitter. “Thank you for taking time to do this.”

The newly elected Conservative Party MP from British Columbia had 129 retweets, 574 “likes” and 54 replies as of 5:15 p.m. Toronto time today in response to his Feb. 22 Twitter message. On Facebook, he had 100 comments and 126 shares.

His posts usually get responses in the low single digits, if any.

Van Popta, who took the Canadian Firearms Safety Course with his grandson, said he signed up to understand voters.

They’re anxious about the governing Liberal Party’s plans to target them with mass confiscations-incarcerations.

The Liberals are preparing to order the forced surrender of a quarter-million rifles from their licensed owners, then go after handgunners.

Anyone who doesn’t turn in their gear could face jail.

After hearing from many of my constituents about how they, law-abiding citizens, had concerns that the Liberal government was targeting them for owning guns and that the real problem, illegal guns and gang violence, was being ignored, I knew I had to learn more.

Today I took the Canadian Firearms Safety Course. This was a very different experience for me, as previously I've never…

Many federal, provincial and municipal politicians have a lifetime of experience with firearms, shooting culture and gun regulations.

A few others are demanding policies — including mass confiscations — in complete ignorance.

They don’t know that all guns are banned already for everyone who doesn’t have a permit authorized by the federal police.

My constituents challenged me to take Canada’s Firearms Safety Course. If you want to have an opinion on guns, you should first learn about them.

My constituents challenged me to take Canada’s Firearms Safety Course. If you want to have an opinion on guns, you should first learn about them. @cherylgallant @TWilsonOttawa pic.twitter.com/i9MyDnaL8X

The first step to obtain a firearm Possession and Acquisition Licence (PAL) is what van Popta and his grandson did: take the safety course developed by the Royal Canadian Mounted Police.

To be approved for a permit, applicants must:

Hunting and shooting are at the heart of Canadian heritage, tradition and the economy.

Even though hunting and sport shooting are popular with MPs from all parties, van Popta’s Conservatives are the only ones opposing the Liberal confiscations-incarcerations against honest individuals and families.

Van Popta, a lawyer who was elected in October with more votes than almost all other candidates in his riding combined, said today he passed the gun-safety course with a near-perfect score.

Thank you to the excellent instructors, and a big thank you to my many constituents and the gun-owners from across Canada, who took the time to write to me and let me know what was important to them.

For those asking, I did pass my Canadian Firearms Safety course! I passed with a 94% while my grandson one upped me with…