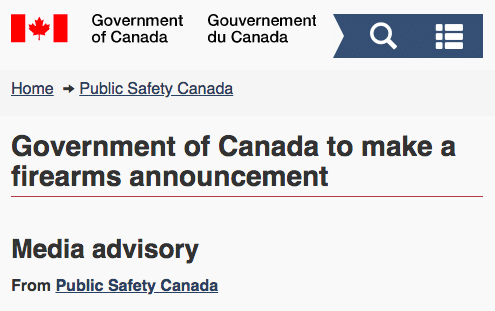 TheGunBlog.ca — The Canadian government will present its new law to limit gun rights tomorrow in parliament, and the minister of public safety will hold briefings for media in Ottawa. The specifics of the legislation will be disclosed then.

Media reports over the past week have outlined several proposals expected in the bill, which spokespeople for Public Safety declined to discuss when contacted by TheGunBlog.ca.

“The Honourable Ralph Goodale, Minister of Public Safety and Emergency Preparedness, will make an announcement related to firearms,” the ministry said this evening in a statement. “Prior to the announcement, a media technical briefing will be provided by government officials for background information only.”

Unofficial copies of text should start floating around soon after.

Worst part could be: RCMP to get power to classify firearms enshrined in law.#IAmTheGunLobby

The Liberals said in their 2015 election campaign that they planned new restrictions on lawful hunters, sport shooters and gun collectors in what could be Canada’s first anti-gun law since they passed the Firearms Act in 1995.

Party members control parliament and government, suggesting they will be able to pass any new measures they want. It could take 9 months or more before the proposals are reviewed, approved and become law. The next election is in October 2019.

The official notice of the proposed legislation was published Thursday as an agenda item for today, with an empty web link to “An Act to amend certain Acts and Regulations in relation to firearms.”

Parliamentary rules require a notice at least 48 hours before a bill is discussed in the House of Commons and forbid government staff from revealing the contents.

The next possibility for the minister to table the law is tomorrow at 10 a.m. in Ottawa during parliament’s Routine Business session.

The Firearms Act banned many of the world’s most popular firearms and made it a crime to have guns without a licence. Owning one legally requires taking an RCMP-approved safety course, passing written and practical exams, obtaining a licence card and passing a daily background check by the national police. Failing to renew a licence for legally owned guns can lead to 10 years in prison.