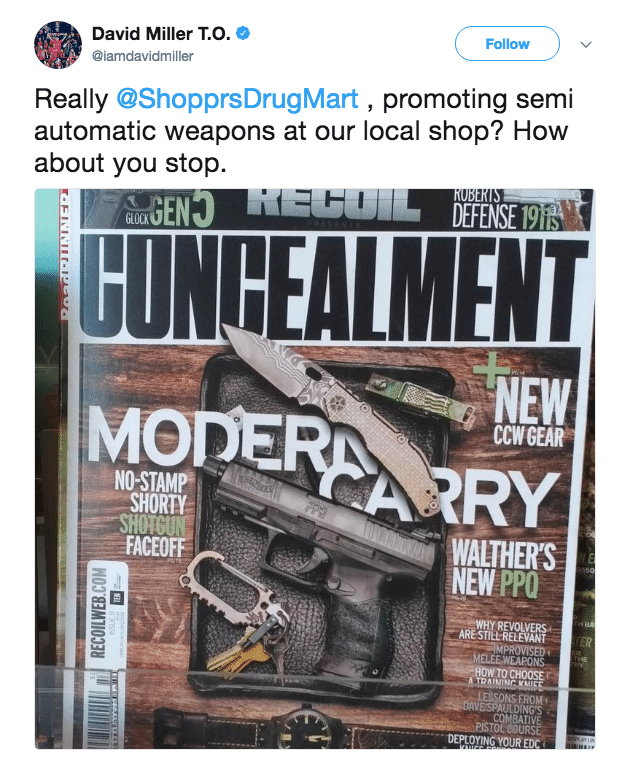 TheGunBlog.ca — It’s disappointing that Shoppers Drug Mart Corp., Canada’s largest drugstore chain, will stop selling Recoil magazine after a tweet by a former mayor of Toronto. The idea of boycotting anti-gun companies is appealing, but it’s unrealistic for most of us, and going to a competitor might be worse.

“Really @ShopprsDrugMart, promoting semi automatic weapons at our local shop?” David Miller, the Toronto mayor from 2003 to 2010, said on Twitter on Feb. 17. He attached an image of the cover of Recoil Concealment magazine. “How about you stop.”

“Hello David, thanks for sharing your concerns,” the drugstore replied today. “After hearing about this, we’ve decided to remove this issue from our stores. We are working on pulling all copies in circulation and will not receive any further shipments of this publication.”

“Hey, this gave us a splendid idea,” Recoil tweeted tonight. “The first five Canadians that tweet a selfie with the latest RECOIL or RECOIL Concealment magazine will receive a one-year subscription, on us.”

Shooters took to Twitter and Reddit to say they will stop shopping at the drugstore network and its parent, Loblaw Cos., and to call on others to join the boycott. They also asked if the company will stop selling drugs and junk food, since tens of thousands of people get sick or die each year from their use.

TheGunBlog.ca is starting to compile a list of companies that refuse to do business with shooters, hunters and firearm-related organizations, and companies that welcome us. Please send suggestions and a few lines about your experience, or a web link.

I was disappointed with Shoppers because I was a regular customer. I’ve been pleased with their service over the years. Even in this case, their responsiveness to a client is exemplary. If I had known they sold Recoil, which calls itself the “gun lifestyle magazine,” I would have gone even more often.

I wish Shoppers had said: “Hello David. Thanks for sharing your concerns. We offer a variety of products to satisfy the variety of tastes among our clients, including the millions of Canadians who shoot and hunt. Please go suck a lemon, available for 99 cents in aisle 2. #PewPewPew.”

It’s fantastic that firearm users spoke up today to show that we prefer to do business with people who share our values, and that we want to avoid those who don’t. The challenge: it’s unrealistic in most cases to do that because we don’t know the values of the people selling us drugs, dental floss and deodorant.

Who has ever discussed guns or politics with their pharmacist or grocer? Me neither.

Loblaw’s brands include Shoppers Drug Mart, Loblaws, No Frills, Real Canadian Superstore, T&T, Valu-Mart and Joe Fresh. Before abandoning them, we’d want to know the gun politics and other stances of the main alternatives, including:

It isn’t a clear choice between good and evil. And which of them sells Recoil?

We also value convenience. I have a Shoppers open 24/7 across the street. Where else can I go for eggs or cookies at midnight?

Is there any store anywhere that sells drugs, groceries and gun magazines, either the kind you read or the kind you load? I don’t know of any.

But Shoppers picked a side today, and it’s the other side. Now a lot of us are thinking twice about going back.