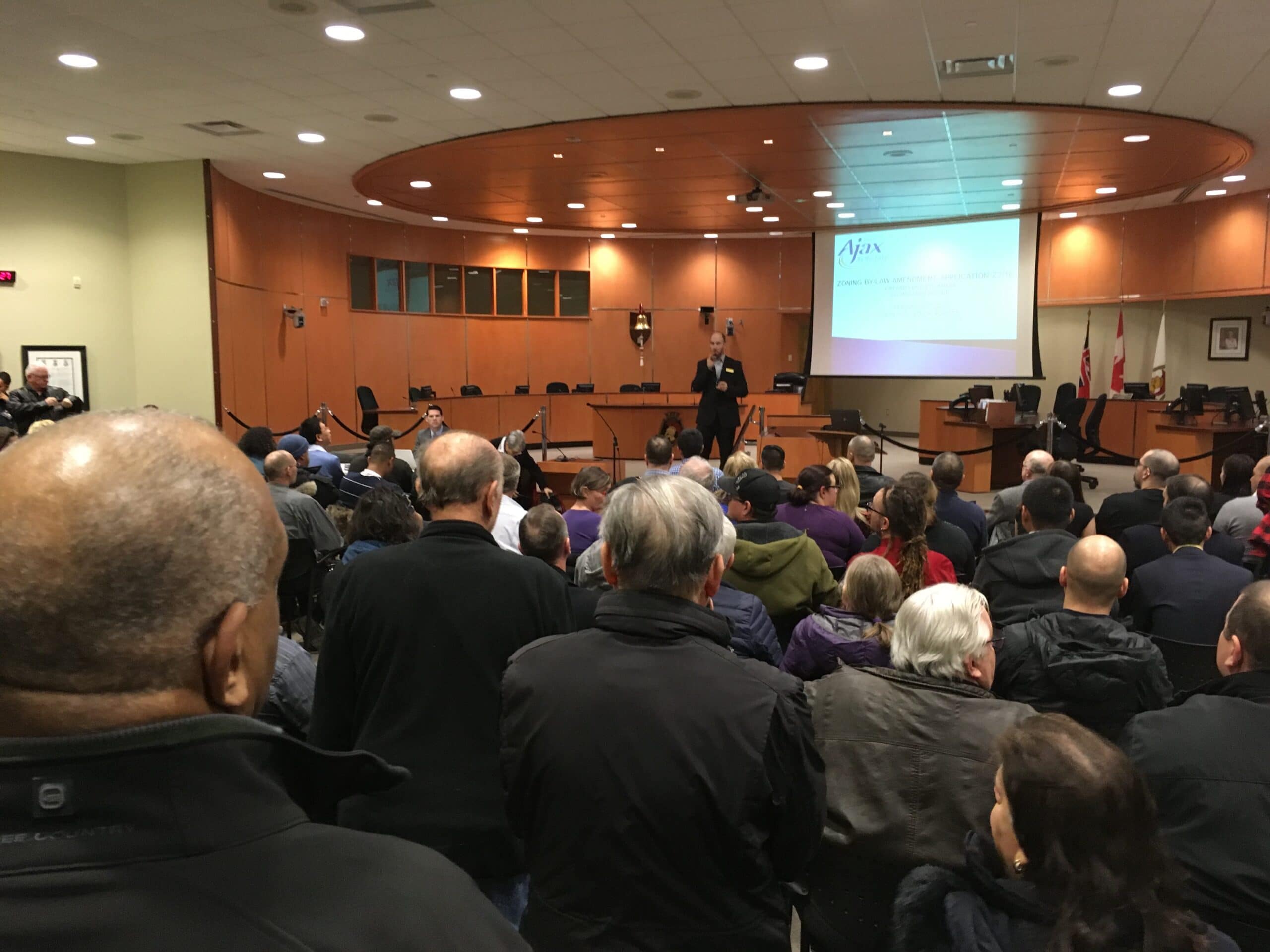 Shooters pack a meeting at Ajax Town Hall in Ontario on 27 Feb. 2017 to support a proposed gun range.

TheGunBlog.ca — Shooters from across southern Ontario packed a municipal meeting in Ajax, about 45 km east of Toronto, to support a proposal by Firearms Outlet Canada gun store to build an indoor firing range. Besides gun shows, it was the biggest gathering of Canadian shooters that I’ve ever witnessed.

Some 250 men and women jammed into Ajax Town Hall this evening, compared with about 10 people who typically show up for such meetings, said the Ajax employee responsible for registering attendees. The room was set up for 120, forcing people to listen from the lobby.

Shooters throughout southern Ontario are starved for places to practice because many facilities are at full capacity and refusing new members, and all target ranges in downtown Toronto have been forced to close. Ontario has more licensed shooters than any other province or territory in Canada.

“Thank you for coming out and not only supporting us as a business, but the entire shooting community,” said Adam Caruana of Firearms Outlet Canada.

The company needs municipal permission to build a range in the shopping plaza where it has its store, and the new facility could open this year if the change in land use is approved soon. The range would have 17 firing lanes, classrooms and an expanded retail area, said Fred Pellegrino, the owner. The shop opened in June 2015, and has expanded to nine employees as business increased, he said.

“It’s been growth from the day we opened our doors,” Pellegrino said. “This is our next logical step.”

Many in the audience, including me, wore tags provided by the store to show support for the range, and about a dozen people took the floor to speak in favour. Only one person, a neighbour who said he was neither for nor against the proposal, asked for details about noise, lighting, parking and operations after Caruana invited people with questions or concerns to voice them.

Tony Bernardo, executive director of the Canadian Shooting Sports Association, and Mike Brake, a firearms instructor, former SWAT member and competition shooter, were among panelists who endorsed the project, which includes advanced systems to automate targets, filter air and reduce noise and vibration.

“Firearms Outlet Canada is going to have the Taj Mahal of training facilities,” Brake said.