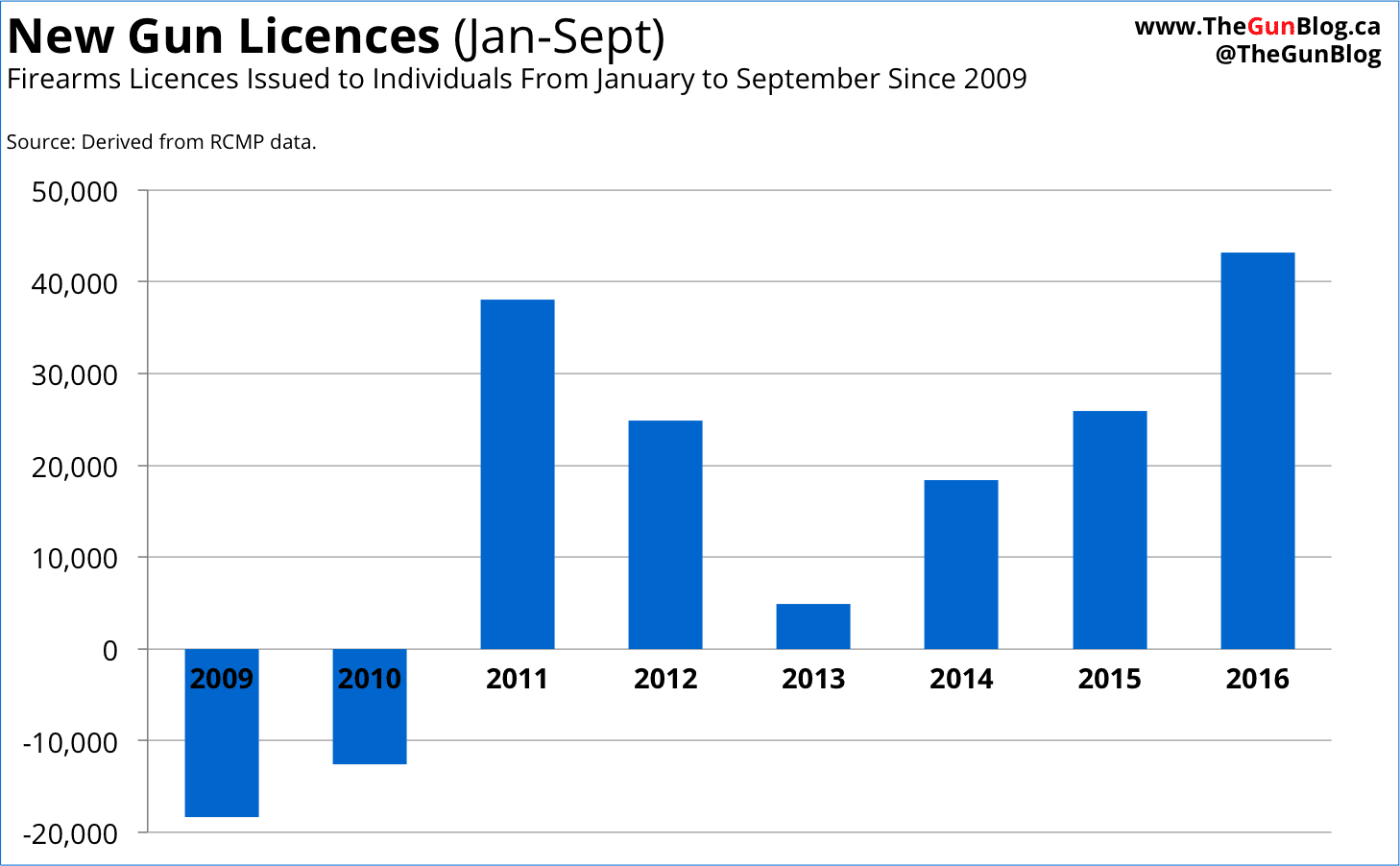 Number of gun licences issued by RCMP to individuals from January to September each year since 2009.

Great news for the Canadian gun community: 2016 is on course for the biggest increase in gun licences since at least 2009, as men, women and youth seek firearms for recreation, competition, hunting and collecting.

Canada had 2,069,022 licences issued to individuals as of Sept. 30, the Royal Canadian Mounted Police said by e-mail yesterday in response to questions by TheGunBlog.ca. That’s a jump of 43,211 from the end of last year, the biggest January-September gain since at least 2009, the first year for which the data are available.

More Canadian adults have gun licences (about 7 percent) than the number who play golf, hockey, soccer, baseball, basketball or who ski. We’re on track for the seventh consecutive year of gains, after declines in 2009 and 2010.

Canadian law makes it a crime to buy or own a firearm or ammunition without a police-issued licence, and getting one is complex and costly. The country assigns guns to three categories: non-restricted, restricted, and prohibited, and has different laws, rules and licences for each type.

A Possession and Acquisition Licence (PAL) for “non-restricted” guns allows the holder to own certain shotguns and rifles, but a “restricted” PAL is needed to legally buy handguns or AR-15 rifles. Each type of permit requires attending 8 to 10 hours of class costing $120 to $200, passing a test, and sending an application to the RCMP with a non-refundable payment of $60 for a PAL or $80 for a “restricted” PAL. The police generally take about two months to check your background, contact your references and, if they decide to approve, to issue a permit. Licences are valid for five years.

It’s encouraging that 43,211 people overcame those hurdles in the first nine months of this year. We exceeded the symbolic level of 2 million total individual licences for the first time in the middle of last year, and there is a chance we could surpass 2.1 million by the end of this year.

The number of Canadians who use firearms legally or who support shooting could be two, three or four times higher than the number of licence holders. In many families, the father is the only one with a permit, even though his wife/partner and children also shoot or hunt. Many people with permits take unlicensed friends to the target range, and many ranges offer unlicensed visitors the chance to shoot under supervision.

In 1998, before gun-ownership licences became mandatory, a report by the Department of Justice estimated that about 3 million civilians owned firearms, representing some 26 percent of households.