The civilian version of the new military rifle for the Canadian Rangers will be in stores from October for about $2,700.

It’s being made by Finland-based Tikka and named “Arctic,” said George Wallace, sales manager for Stoeger Canada, which is distributing the rifles. It won’t have the Canadian Rangers logo on the stock, and the stock will have a different colour than the military version, he said. Both the civilian and military models are based on Tikka’s T3 Compact Tactical Rifle.

Tikka has sold close to 1 million of its T3 bolt-action rifles since sales began in 2003, with shops listing them at $700 to $2,000, depending on the model. When Wolverine Supplies said on CanadianGunNutz.com in April that it would sell the Arctic for $2,695, some people balked at the price, while others were eager to own a Canadian Rangers-inspired T3.

“The first deliveries to retail are likely to be the second week of October,” Wallace said Aug. 26 by e-mail. “These are being produced for us in the month of September.” 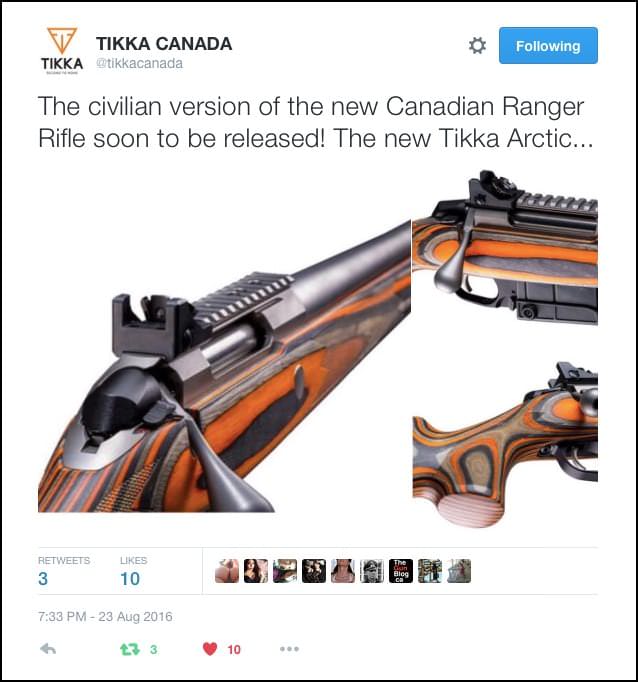 The military version for the Rangers, who patrol isolated areas in Canada’s north, is being adapted for use in extreme cold weather, long exposures to salty coastal air and transportation on all-terrain vehicles, small boats, sleds and skidoos, Colt Canada Corp. said last year. The company, a unit of U.S.-based Colt Defense LLC, manufactures guns and advises the government on firearms for the Canadian Armed Forces. It’s making the barrel, bolt and receiver for the new Rangers rifles, known as the C-19.

Canadian Rangers “are often in remote and isolated regions of Canada where they require a hunting rifle for survival and self-defence against large North American carnivores at ranges of 0 metres to 300 metres,” Colt Canada said in last year’s statement.

For almost 70 years, the Rangers have relied on the Lee Enfield No. 4 rifle. It is becoming increasingly difficult to maintain because of the age and scarcity of parts, Colt Canada said at the time.

The Tikka Arctic rifles, like their military counterparts, will be .308 calibre. They’re being made in September, and deliveries to stores in Canada depend on the production schedule, Wallace said. The price could change in case of fluctuations in the currency-exchange rate, he said.

“Our initial 2016 numbers will be limited to production capability at the factory in Finland,” Wallace said in a follow-up e-mail yesterday. “Having said that, this will be part of our Canadian product listing for the foreseeable future.”

Stoeger Canada, based in Oshawa, Ontario, and Tikka are both subsidiaries of Beretta Holding SpA of Italy.